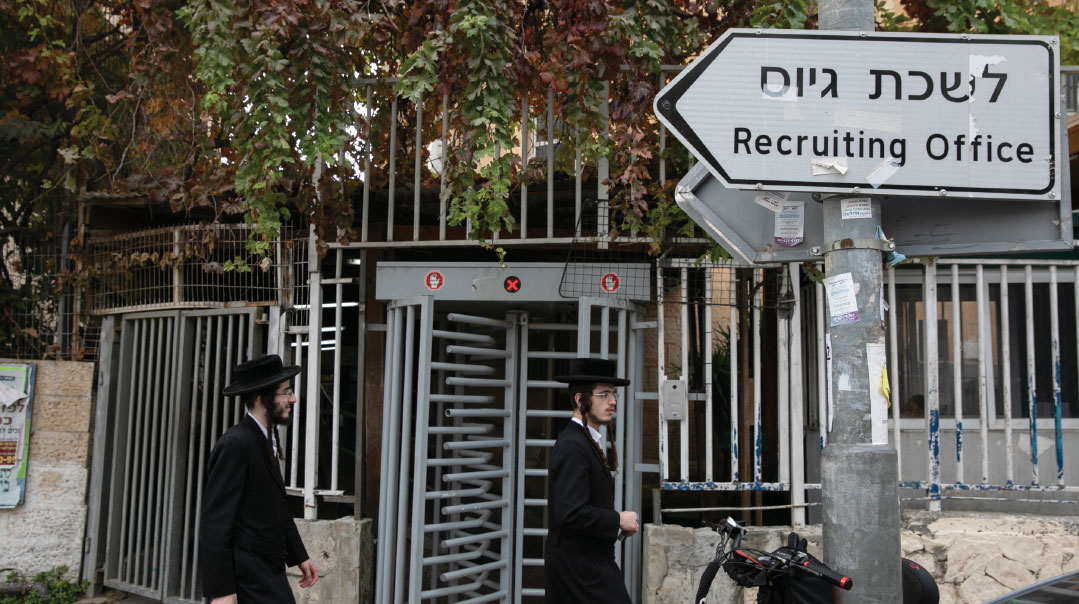 The tale of the chareidi draft — the wedge issue that has split Israeli society, brought down the government, and prevented a new one from being formed — has taken a new turn that few foresaw and no one wanted.

A bombshell report on Israel public radio last week has stirred the pot of the roiling debate, just as it looked all but inevitable, at press time, that the country would be heading toward a third round of elections in a year, barring some miraculous last-minute compromise.

The chareidi draft question has been at the heart of Israel’s political discourse in recent years, and indeed is what led to the disbandment of the 20th Knesset and the early elections called for April of this year.

In March 2014, then finance minister Yair Lapid’s draconian draft law was approved by the Knesset. The law required the state to progressively raise conscription rates among chareidim into the IDF and civil services. The law further stipulated that if the quotas it established were not met by 2021, criminal sanctions would be imposed upon every chareidi of military age not in the army. The chareidi parties, sitting in the opposition, were powerless to prevent the law’s passage. The government later voted to delay implementation of the law by six years.

The IDF set up a special department to oversee the integration of the chareidi community into the army. The department reported having drafted 1,200 chareidi youths at the end of its first year of activity. With every year the figures for the chareidi draft swelled further. In 2017 the department reported that the IDF drafted 3,070 soldiers from the chareidi community. The Defense Ministry was so impressed by the figures that in late 2017 it decided to establish an administrative division under Lieutenant Colonel Telem Chazan to help chareidi soldiers integrate and ensure their needs were met throughout their service.

In February 2018, then defense minister Avigdor Lieberman established a committee made up of representatives from the IDF and the Defense Ministry to draw up a new legislative proposal that could win the approval of the High Court.

In June 2018 the committee released its recommendations, which included quotas for  conscription enshrined in the law and criminal sanctions in the event the quotas were not met. The proposal was passed in its first reading by the Knesset while the chareidi parties, as instructed by gedolei haTorah, voted against the bill and Yesh Atid voted for it from the opposition. After Lieberman resigned the defense portfolio in November 2018, the High Court partially accepted Netanyahu’s request for an extension, extending the validity of the previous law until January 15 of this year.

Shortly after his initial appointment in 2017, we caught up with Lt.-Col. Telem Chazan to discuss his new position overseeing the chareidi draft. Chazan, who comes from the dati-leumi community, previously served as deputy commander of a paratroop unit. He outlined his agenda to us, saying his responsibility was to make it possible for a Torah-observant Jew to serve in the IDF.

I inquired why he was speaking about Torah-observant Jews, which includes the dati-leumi community, and not specifically about the chareidi community, for whom the program had supposedly been founded. Chazan declined to enter into the political question and only observed that the figures for the chareidi draft deserved closer examination. When I asked what that meant, he replied that it was only a general observation.

Last week it became clear that it wasn’t just a general observation. The Israeli Public Broadcasting Corporation, known as “Kan,” revealed last week that the IDF has been systematically distorting chareidi draft figures for years. According to the report, the numbers the IDF disclosed were sometimes more than double the actual number of chareidi conscripts. When the IDF drafted 600 people under its own definition of “chareidi,” it reported drafting 1,200. In 2017, when the army claimed to have drafted 3,070 chareidim, the true numbers were actually much smaller.

In 2018, when Chazan was asked to provide the figures for chareidi military conscription, he launched an independent investigation and asked for concrete numbers from every unit in the IDF. He found that only 1,650 chareidi soldiers were actually serving in the army. It was a difference of hundreds of percentage points from the official rates of conscription. Chazan, according to Kan’s report, was coerced into reporting far higher rates of conscription in order to match the figures from 2017.

But Chazan’s investigation had revealed that in that year, too, data was fabricated. In reality the IDF drafted only 1,300 people who answered its definition of chareidim in 2017. Where did the high numbers come from? The IDF included in its figures for chareidim many who didn’t meet that definition, including dati-leumi soldiers, and some who weren’t religious at all.

What this means is that anyone who railed about the “gezeiras hagiyus” or about “chareidim swarming to the army” was simply deluding himself. The vast majority of chareidi youth continue learning in yeshivah. The programs set up by the IDF to encourage the chareidi draft have been miserable failures, simply because no one is interested. Anyone who tried to get chareidim to join the draft, by claiming that it’s become an accepted and even increasing phenomenon, will have to admit failure.

In light of the scandal, the IDF released an official statement to the effect: “The IDF has recently discovered errors in the figures for chareidi conscription in the past few years. Recognizing the mistakes, we have taken measures to rectify our counting criteria, and to supervise the body responsible for calculating the rates of chareidi conscription into the IDF.”