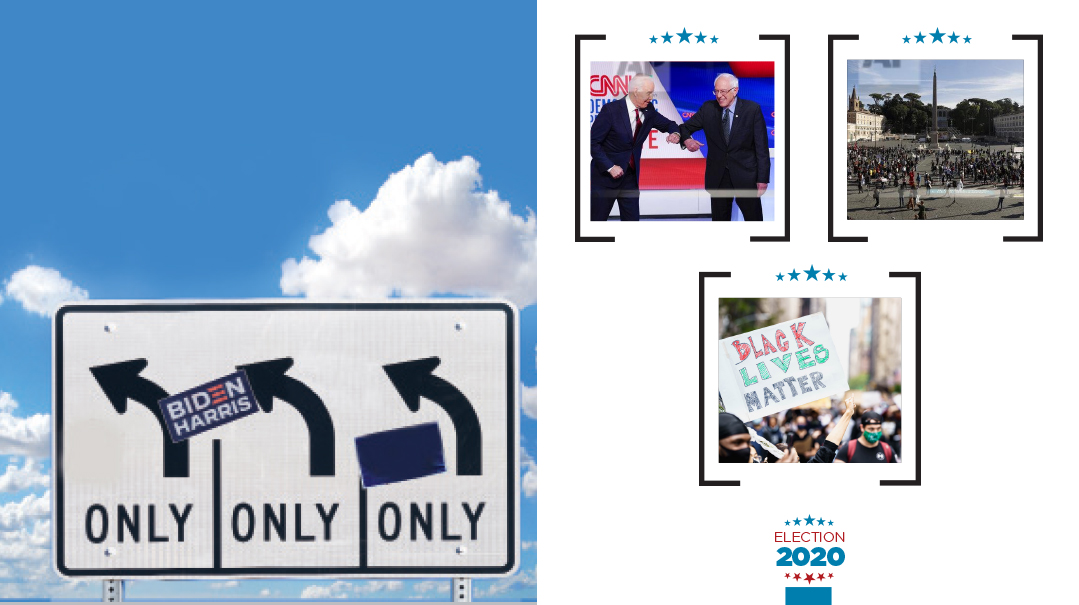 The so-called “Blue Wave” that broke over Congress in the November 2018 midterms handed the Democratic Party a 41-seat gain and control of the House, and opened the door to President Trump’s impeachment.

But that wasn’t all. The anti-Trump fury of the Blue Wave also crashed down over moderate Democrats. The arrival of the “Squad” — a quartet of young, socialist anti-Israel Democrats — was the clearest sign that the party was shifting leftwards. In the biggest upset, Alexandra Ocasio-Cortez — then a 29-year-old progressive activist known as AOC — defeated long-serving Democratic incumbent Rep. Joe Crowley.

Two years later, it’s clear that the undertow of the progressive wave has pulled the Democratic Party far to the left. Congress rejected AOC’s ruinously expensive Green New Deal to fight climate change, provide Medicare for all, and guarantee a “living wage” for all Americans. But despite the initial proposal’s $51 trillion price tag, the progressives’ energy forced Joe Biden to move with the times. Repackaging the “climate emergency” for blue-collar workers uninterested in trendy progressive causes, Biden promised “good union jobs that expand the middle class” — a $2 trillion Green New Deal in all but name.

It’s not just climate rhetoric. For all his “C’mon, man!” Joe-from-Scranton spiel, Biden is no continuity candidate. On issue after issue, from abortion and alternative lifestyles to the death penalty and immigration, Biden and the Democrats have shifted leftward.

“By any understanding of ‘moderate’ as that term was used when Obama or Bill Clinton were president,” writes Jeff Jacoby, “Biden is no moderate. As his party has shifted left in a hyperpolarized era, he has shifted with it.”

Republican strategist Jeff Ballabon agrees. “Biden is clearly a veneer of moderation over a party completely overwhelmed by the left,” he says. “The utility of the moderate wing in today’s Democratic Party is as a smokescreen for the far left.”

With all the sound and fury of the 2020 elections, the leftward shift of today’s Democratic Party, with progressives ascending from grassroots to commanding heights, is one of the biggest stories of this political era. For old-style Democrats, conservatives, and those concerned about the future of Jewish life in America, the tectonic shifts on the left raise big questions: How will the world of AOC shape politics going forward? What is the appeal of neo-socialism, especially to young voters? And how can moderates everywhere push back against the progressive tide?

The vast numbers of Americans voting early and the historically high turnout for the Trump-Biden showdown reflected one basic reality: The parties were offering two very different visions. It’s the Democrats’ version that is most concerning for America’s Torah community.

“The progressives have a laundry list of policies, from government-provided health care and an unrealistic minimum wage, to redefining what marriage is, but they all have one overarching aim,” says Rabbi Yaakov Menken, managing director of the Coalition for Jewish Values. “Tearing down society, and remaking its values.

“But we should be most concerned by their attempt to push religion out of the public sphere. Progressives want to deny religious providers a foster care license, if they require prospective parents to be in a traditional marriage. They opposed the Supreme Court nomination of Justice Amy Coney Barrett because she has a religious worldview — despite the Constitution prohibiting a religious test.”

And the sharp left turn that progressive Democrats have taken on Israel policy, says Rabbi Menken, goes beyond anything that has come until now. “AOC minimizes the Holocaust, talking about ‘concentration camps’ on the southern border of the United States for illegal immigrants, and avoids meeting with Jewish groups, even backing out of an Americans for Peace Now event to memorialize Yitzhak Rabin.”

“On a practical level, says Jeff Ballabon, “there’s no difference between the Democrats’ 2020 platform and that of pro-Palestinian activist Linda Sarsour. According to James Zogby, another pro-Palestinian voice, the platform is a victory for BDS.”

Of particular concern in all of this is Biden’s VP pick, Kamala Harris. Touted as a “traditionally pro-Israel Democrat,” her positions on BDS in fact highlight the party’s problematic direction. The Strengthening America’s Security in the Middle East Act, which AIPAC said “contains critical pro-Israel provisions,” passed 77-23 in February. But notably, Harris, along with six other then-contenders for the Democratic nomination, voted against it on free-speech grounds — often a convenient cover for the progressive anti-Israel movement.

And from the ranks of mainstream Democrats, there’s a threat from an unexpected quarter: the International Holocaust Remembrance Alliance (IHRA) anti-Semitism definition. In the week that the former leader of Britain’s Labour Party was suspended, partly because of his steady refusal to endorse IHRA’s clauses on Israel-criticism (see “The Rise and Fall of Jeremy Corbyn,” in this week’s main magazine), it seems that figures in the Democratic Party are following the same path. According to Jeff Ballabon, Maryland junior senator Chris Van Hollen told Jewish groups that he wouldn’t endorse the IHRA definition, precisely because it limits criticism of Israel.

The Death of Moderation

“Despite all the talk of the six million Obama-to-Trump voters winning the election for Trump, more Obama voters in 2012 swung to not voting or voting third party in 2016.”

Ibram Kendi is the head of the Center for Antiracist Research at Boston University and an influential voice on the progressive left. The “other swing voters” argument was his pitch for backing a true radical in the Democratic primaries. Notable for its absence was a claim that moderates were too centrist. “Moderates tend to agree with progressives on the crises of health care, inequality, and climate change,” he commented, “while advocating for gradual remedies that they consider more politically or economically viable.”

So having mainstreamed many parts of their program, amid shrinking daylight between progressives and moderates, how will progressives shape Democratic and national politics going forward?

If the summer’s Black Lives Matter protests are anything to go by, the Democrats’ future is increasingly far left. As American cities were torched, stores looted, and police attacked in the wake of the George Floyd killing, many local Democratic leaders, including New York City mayor Bill de Blasio, chose to look the other way, or blamed institutional racism.

Joe Biden himself was accused by conservative media of staying silent on the looting, when in fact he’d condemned it six days after the attack. “Protesting such brutality is right and necessary. It’s an utterly American response,” he posted. “But burning down communities and needless destruction is not. Violence that endangers lives is not.” But Biden certainly wasn’t going out of his way to sell a law-and-order vision as he had back in 1993, by passing a crime bill.

More concerning, regardless of Biden’s own positions, his party in general is yet more radical, and its young guard is making the running. In the wake of the Floyd killing, a joint Biden-Sanders task force on police reform went much further. According to the New York Times, there was a “near unanimous sentiment that local government should redirect more money towards social services, education, and mental health services.”

Jeff Ballabon agrees that it’s the “deep state” of Democratic politicians who need watching. “During the primaries, I told a Democratic pollster that even if Biden wins, presidents rarely make policy — it’s the administration officials who get to shape it. He agreed that as far as Democrats go, it’s all over.”

New York’s own local politics may be a sign of things to come in the Democratic Party. In a closely watched race in New York’s 16th Congressional District this year, Jamaal Bowman unseated 16-term incumbent Eliot Engel. The strongly pro-Israel Democrat — Engel voted against the 2015 Iran nuclear deal and for the George W. Bush administration’s Iraq war — was replaced by the pro-Palestinian Bowman, a political newcomer who had been approved by the Democratic Socialists of America (DSA).

Upstate, Mondaire Jones, another progressive, continued the pattern by succeeding the retiring pro-Israel Rep. Nita Lowey. Although Jones says he’s independent and not bound by other progressives’ positions on Israel, his positions are anything but historically centrist. In an interview with Mishpacha earlier this year, he said that “one of the ways we invest more in health care, housing, and the Green New Deal is by reducing our military budget. We need to reallocate some of those savings to the State Department so that we can achieve lasting peace and security without military intervention and without unnecessary death and destruction.”

Even though some Democrats reject the notion of a left turn, insisting that the Squad are just a fringe, the leftward direction of travel seems clear. Ideas that began on the far left, such as the Green New Deal or defunding the police, are watered down but still mainstreamed. In response to the GOP’s successful push to appoint Justice Amy Coney Barrett to the Supreme Court, progressives called for packing the court — and Biden, the ultimate establishment man, refused to rule it out.

In this atmosphere, policies backed by the Justice Democrats, the group that funds the Squad, such as stopping arms sales to Israel and ending US unilateral declarations of war, look outlandish today. But could they be Democratic policy tomorrow?

On almost every key issue, the long-term threat to America as we know it from the progressive tilt is clear. The response, less so — but it begins with understanding the appeal of neo-socialism to young voters. Why is AOC’s new brand of purist politics working?

“Socialism sounds great to young people who’ve never had to work,” says Rabbi Menken. But explaining how it manages to appeal even to older voters, he says it has to do with the idea of progress. “Progressivism requires constant movement — there has to be something new. It’s not enough to have yesterday’s affirmative action, so today we have the idea that there’s systemic racism. Progressives are constantly looking for the next big idea, and no one is willing to say that the emperor has no clothes, and that these ideas don’t make sense.”

A push-back strategy against the progressive tide, says Jeff Ballabon, is Rudy Giuliani’s “broken window” theory of policing. “You have to fight them over the little things,” he says. “The Trump administration’s moving the US embassy to Jerusalem was big, but so is challenging the State Department rule that Jerusalem can’t be listed on US passports as in Israel, as Ari Zivotofsky successfully did this week.”

As the United States enters an era where progressives are shaping policy at an unprecedented level, making the party of Truman an increasingly conditional friend of Israel and attacking traditional values in the name of progress, Biden’s path to deciding on a vice president was telling.

“If I’m elected president, my administration will look like the country,” he declared, indicating that in the modern Democratic Party, identity is key, “and I commit that I will in fact appoint a woman as vice president.” 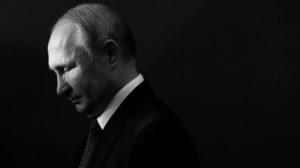 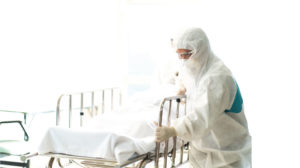 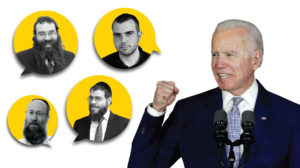 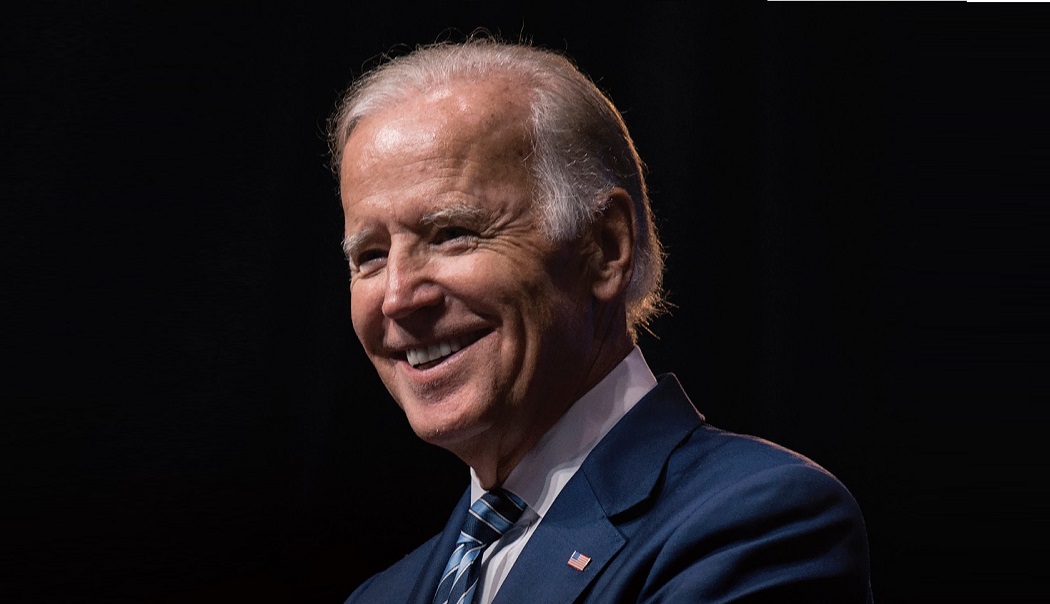 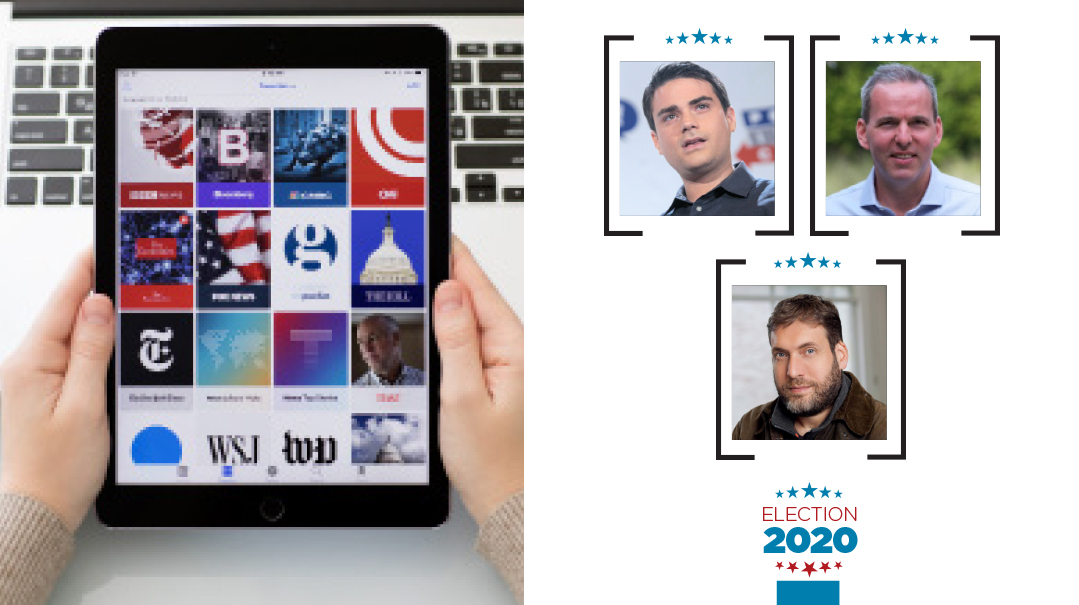 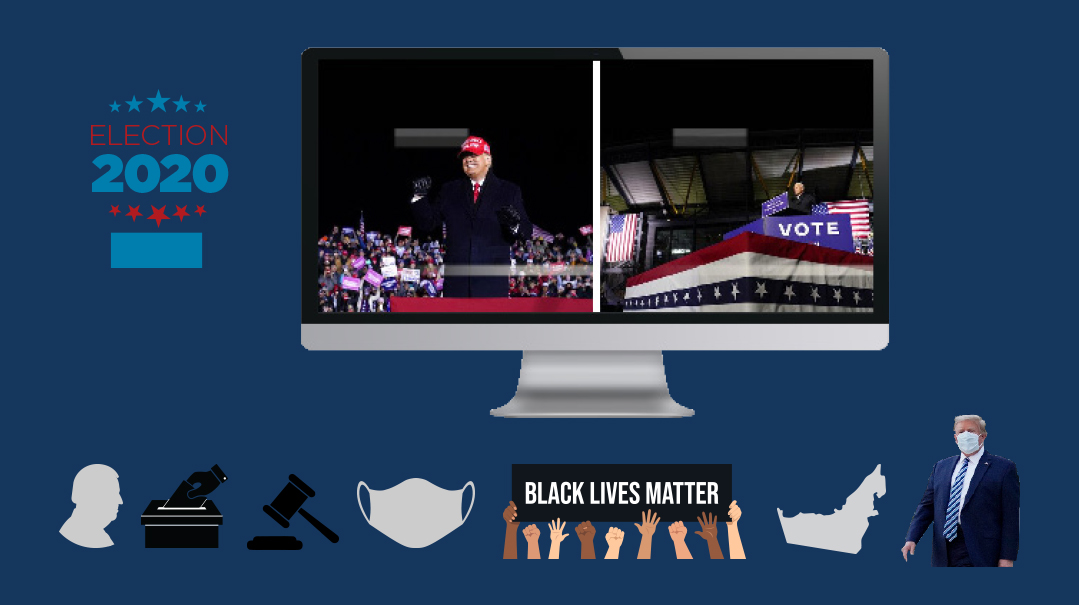 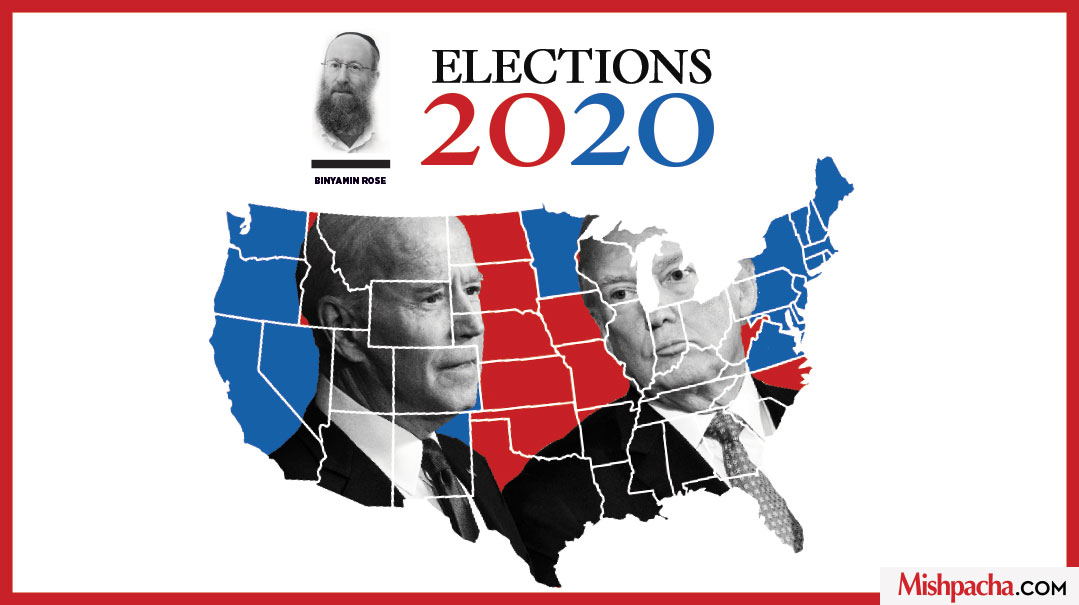