As I conjure that precious, long-ago image, one word wells up within me. Just one word: Dignity 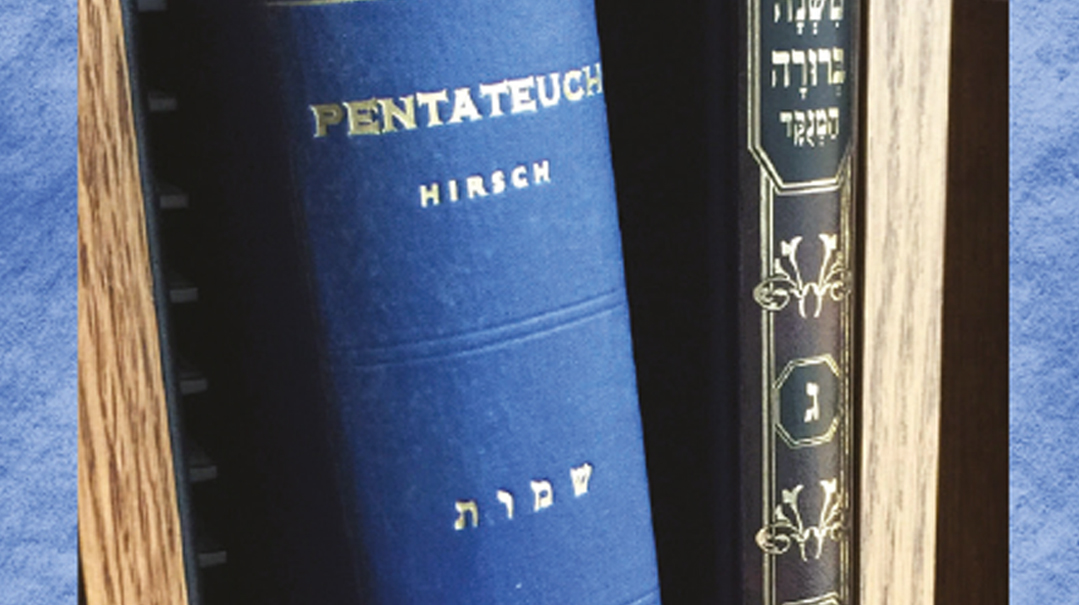 As I sit at the desk in my study, I spy a sefer on a bookshelf just beyond arm’s reach. Of my many seforim on Chumash, this one sefer stands out for having gold-embossed lettering on the spine in both Hebrew and English. I scan the four words: Pentateuch. Hirsch. Then, in Hebrew, Sh’mos, and English, Exodus.

It’s the second volume of Rav Shamshon Raphael Hirsch’s commentary on the five Chumashim, rendered into English by his grandson Isaac Levy. Published in London in 1967, this classic edition has since been joined by a more contemporary English translation that many find more accessible.

Perhaps. But I’ll continue to treasure this old-fashioned, thick blue volume, the last one still in my possession from the set of five that belonged to my mother, a”h (the other four now in the homes of grandchildren). As I run my hand over its cover, my mind’s eye replays a scene from my childhood home on Shabbos afternoon: Ima sitting at the dining room table, looking intently into the Hirsch Chumash open before her, seeking to glean something meaningful and usable, to take with her from that week’s parshah.

And as I conjure that precious, long-ago image, one word wells up within me. Just one word: Dignity.

Someone preparing a speech on tzni’us once asked Rav Yaakov Kamenetsky, zatzal, what to convey, and his first response was, “Az m’reht fun tzeni’us, iz es shoyn nisht tzanu’ah. To speak publicly about tzni’us is already not fully in keeping with the tzni’us ideal.” That partly explains why I don’t write much about my beloved mother: What struck anyone who encountered her was her noble dignity, or dignified nobility – atzilus in Hebrew. And to speak of that too publicly or too much doesn’t feel right.

Ima was born and raised in the small German Jewish community of Eschwege. She was just thirteen years old when she fled here with her parents and siblings in 1939, on the proverbial “last boat out of Germany.” Her dignity was the characteristic German-Jewish kind: Reserved, not withdrawn. Proper, not stiff. Full of tochen, but with no pressing need to make that known, unlike the near-empty pushke whose few coins rattle noisily. Quiet chesed, wordless warmth, practical wisdom.

This sefer, too, has a dignity of its own, inside and out. The typeface, the binding, the paper cover all bespeak a bygone, Old-World class befitting a masterwork of Torah brilliance whose every page conveys the immense dignity of the Jewish nation and its world-changing mission on Earth. My noble mother, a”h, sitting with her Rav Hirsch Chumash was an unforgettable study in a quality our world so desperately needs today.

I’ve tried in my own way, however inadequately and flawed – unlike Ima, I am, after all, only a half-yekke! – to bring a bit of dignity to the many parts of who I am and what I do: as a Jew, as a spouse, as a parent, as a writer.

Eytan Kobre is a contributing editor and columnist at Mishpacha.