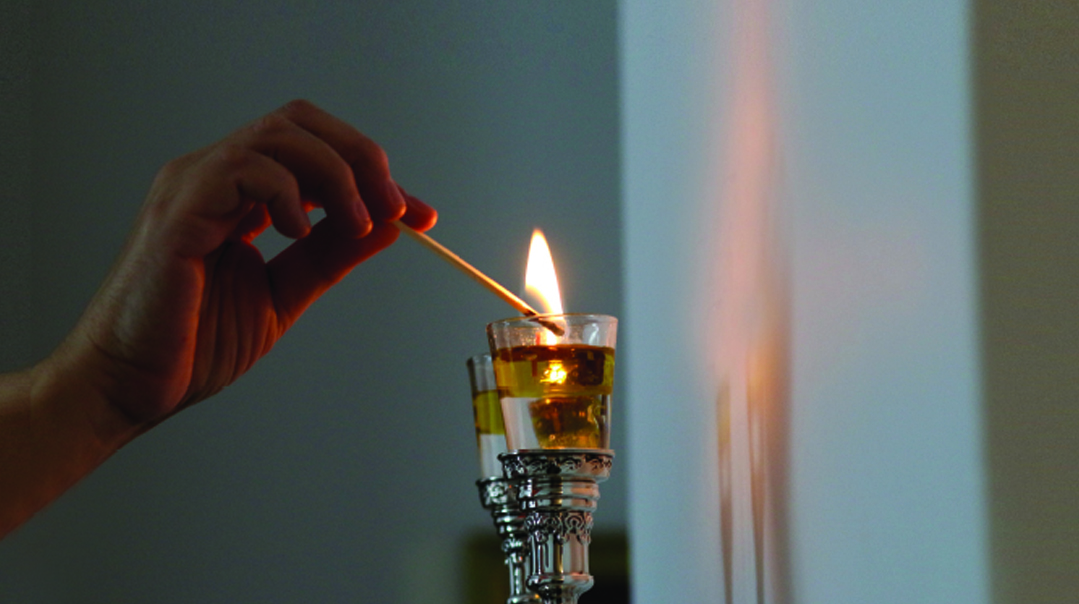 I kinda felt like a reverse Converso — pretending I was frum in public when in fact my family didn’t keep Shabbos or kashrus. As long as I could keep up the ruse, though, I kept dressing in skirts, avoided sharing any precise details about my parents, and tried to be one of the crowd.

My parents brought a few principles with them when they left Israel and settled in America. We had yearly Pesach Seders and separate dishes for meat and dairy. (We didn’t necessarily have kosher food on those dishes.) Another thing they brought was a fear of the American public education system. That’s how I ended up in yeshivah and in religious day camps. And that’s what led to my strange quasi-religious act: I so badly wanted to join the cool (but nice) clique in camp that I walked the walk and shuckeled the shuckel, at least on the surface.

I vaguely let these religious girls know that I was more observant than my family, which only made the welcome warmer and served to make me feel like a lying slug.

I didn’t really mean to deceive them. It was more like a lie by omission. They didn’t know that when I put on a skirt in the morning, I was pulling it from a closet full of pants and shorts. That when I hung up the phone after wishing them “good Shabbos”, the table in my home wasn’t set, there were no candles about to be lit, and my family was most likely going out to eat. I didn’t offer that information. But at a certain point after spending time with these quality girls, I decided that I wanted to be like them. I was going to be religious and observe halachah just the way they did.

Let’s just say it didn’t go over too well. When I went to friends for Shabbos, I knew this was the life I wanted to lead, but commitment seemed impossible. There was the Erev Shabbos I decided right then and there to keep Shabbos from now on, only to discover that my family had been invited to a pool party for the weekend. Uh, rain check, G-d? Or the wardrobe I slowly tried to convert to halachic standards, only to find the perfect mini skirt that I just had to have.

Clearly, trying to swallow all 613 mitzvos whole was only proving to frustrate and overwhelm me. So I came up with a plan. “I won’t keep the whole Shabbos,” I told myself, “but I can decide that once it’s sundown on Friday, I will refrain from playing the piano.”

That should have been easy — a nice bite-sized commitment, right? Well, knowing that this was the one thing I couldn’t do made my fingers itch. When I persevered through Shabbos, nothing was as sweet as that feeling of triumph, so I upped the ante and committed to avoiding another forbidden activity the next Shabbos, and another one the next: Writing to my pen pals, cooking (that one was easy, sorry Mom, no pancakes for me, cereal and milk will do) and finally driving in a car.

At some point it dawned on me that now that I was not doing the prohibited things about Shabbos, I might as well add on some “zachors” of Shabbos. Kiddush and candle lighting, here I come.

It wasn’t as easy as it sounds, but Hashem threw some help into my lap. That year I got a job babysitting an infant Friday nights. The Catholic couple knew I was keeping Shabbos, so they kept all the lights on for me. (I also babysat on Sunday, and they paid me then.) I brought along grape juice in a thermos and some food that had been prepared before Shabbos. The baby slept peacefully, I had my Shabbos meal, and then I read to myself and just relaxed. Sometime my mom walked around the block to hang out with me. In addition to those quiet, relaxing Friday nights, I spent Shabbos mornings involved in the youth department of a local shul, and spent as many Shabbosim at friends as possible.

Conquering the tzniyus issue, at that point, wasn’t as hard. I had a template. I decided that as I selected clothing each morning, I’d ask myself, “Can I execute today’s itinerary in a skirt as easily as pants?” (Though I doubt I said it so eloquently, I was only 15.) So my study day at the library had me declaring “skirt day.” Babysitting at the neighbors: skirt day. Horseback riding? No, I wasn’t gonna do it in a skirt. And I didn’t. And it only helped me realize how authentic I was to the promises I made myself.

After a few months, things got easier. At that point, I was attending a high school that catered to baalei teshuvah and I sensed that I could share my struggles with my teachers openly. With invitations to teachers’ homes for Shabbos and their support system of love, things fell into place. Additionally, my camp friends became my school friends, enveloping me with even more support.

My parents, while they never fully got on board with my lifestyle, not only didn’t question it, but supported me with whatever I needed, buying me a rolling cart with my own sets of kosher pots, pans, and dishes. By the time my babysitting gig was up, I was comfortable doing Shabbos at home. To this day I have the warmest memories of my father joining me while I made Kiddush and actually putting on a kippah. We had the best conversations on those Friday nights. He and my mom were thrilled when I married a frum boy from a really great family that adopted my family, not just me. My parents never became fully observant, but their pride in the home and family I built was clear.

At some point I realized that during my teenage struggles to live my values, I had found the prototype for life. Making a big leap sounds dramatic and exciting, but in the daily grind, I could only stick to my goals when they were small, sure, steady steps. As a kid, I was able to overcome that urge to watch the Saturday morning cartoons because it was just that one thing. As an adult, the changes I make are harder — they muster more internal opposition, more resistance. So whenever I have an overwhelming task ahead of me, I remember that teenage girl who slowly changed her life from Shabbos to Shabbos, and remind myself of what I call the ODAAT rule: