h, the excitement of renovating your home! It’s all sweet dreams — until the moment your interior designer starts to ask those fateful questions: Knobs or pulls? Blinds or shades? Tiles or wood? As the questions pile up and you start to panic, you might have a query of your own: Was it always so overwhelming?

When it comes to interior design, there’s never been an era with so many choices.. But before you find yourself longing for a simpler place and time — tent living, anyone? — consider the challenges our ancestors faced when creating a homey, livable space.

When One Door Closes…

We all know the quote: When one door closes, another opens. But closed doors weren’t a problem for our early ancestors for one simple reason: The door hadn’t yet been invented. Living in door-less caves or tents, their problem was finding a way to keep out unwelcome intruders, whether it be wild animals or dangerous marauders.

An early solution was rigging an animal hide or a woven cloth curtain over the home’s opening, which might not have been very secure, but at least you didn’t have to worry about what sort of doorknob would go with it.

Wealthy ancient Egyptians began making doors from wooden slats about 5,000 years ago, and some of the doors even had simple locks. In fact, ancient craftsmen were quite skilled at making bronze locks and hinges.

But the hardware was expensive — mass production was still thousands of years away — which is why most people continued to make do with a long cloth for the front door. Another curtain separated the public space used to receive visitors from the private area where a family spent much of their time.

Metal locks and hinges remained prohibitively expensive during the Middle Ages; you got them from the local blacksmith, along with your horseshoes. It was therefore common to equip the front door with a low-tech security system involving a bar across the door that could be lifted or lowered with a latch string. Valuables — if you had any — were stored in a wooden chest, which would be “locked” with heavy leather straps.

The idea of creating a variety of distinct and private interior rooms didn’t become popular in England and northern Europe until the late 1500s, when chimneys — a dwelling’s principal source of heating — became more common. As usual, it was the wealthy who started the trend. With time, wooden doors began to replace textile hangings and the doorknob made its debut.

A doorknob could function in one of three ways: it could be a simple pull, which doesn’t turn but does open and close a door; it could have a latch, which is operated by turning the knob and keeps a door securely closed, but not locked; or it could have a lock mechanism. During the Industrial Revolution, advances in steel production and tooling equipment turned production of any kind of doorknob into an art form.

Cut glass, ceramic, brass, wood, even doorknobs made from potter’s clay — suddenly people could not only afford to securely close their doors, they could do it in style. We can too, because manufacturers continue to turn out a dazzling array of doorknobs in different styles and materials. 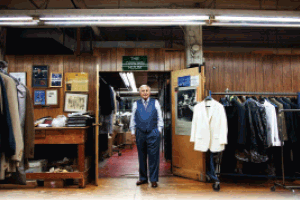 Planning a chasunah should be done with a sense of gratitude, not a sense of entitlement.