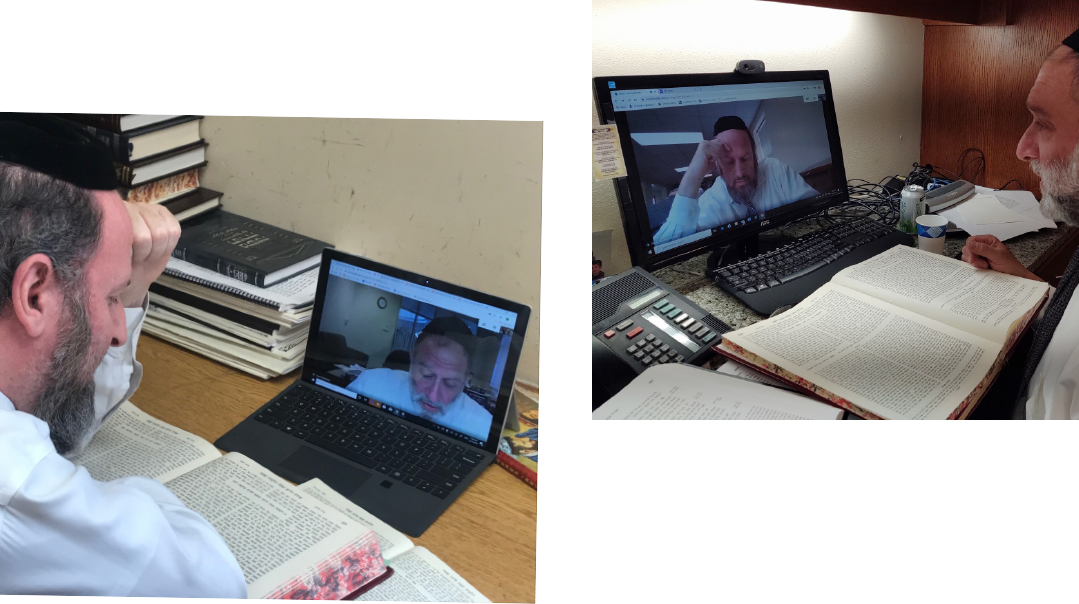 hen Rabbi Avrohom Weinrib moved from the Jewish metropolis of Chicago to become a rav in Cincinnati’s frum community eight years ago, he felt the difference immediately. Rabbi Weinrib grew up in Flatbush, lived in Eretz Yisrael, and learned in Chicago, so the dearth of potential chavrusas weighed on him.

Today, his chavrusa is just a click away. Dallas may be 1,000 miles from Cincinnati, but Rabbi Weinrib has a daily seder with Rabbi Aryeh Feigenbaum of that Texas city, utilizing Skype to navigate the halachic intricacies of mashing eggs or measuring medicine on Shabbos. The chavrusashaft has held up for several years now, and conversations with other rabbanim across flyover country have helped spread the word.

Rabbi Weinrib studied at Yeshiva Bais Moshe of Scranton before heading for Mir in Yerushalayim for seven years. When he and his wife moved back to the United States, they settled in Chicago, and Rabbi Weinrib led a kehillah there for six years. They then set about looking for a smaller community where they could make a tangible difference. When the Weinribs first arrived in Ohio to lead Congregation Zichron Eliezer and the Cincinnati Kosher organization, Rabbi Weinrib learned by himself, which wasn’t ideal; or with a member of the kollel, but that proved too difficult.

“I very much wanted to delve further into areas that would be helpful for psak, but that didn’t necessarily coincide with what the kollel was learning,” he explains.

It was in 2014 that the idea first came to him — to learn with a chavrusa via Skype. Rabbi Weinrib contacted Rabbi Feigenbaum, whom he knew from Dallas, where the Weinribs have family, and from other joint projects, like bringing together a dozen or so rabbanim annually for a full day of discussions of best practices. This time, the pair embarked on the creation of a beis medrash with screens instead of shtenders.

For four years, Rabbis Weinrib and Feigenbaum learned together daily, covering Shulchan Aruch Even Ha’ezer, hilchos eiruvin, and hafrashas challah. They were extremely satisfied with their arrangement and wanted others to know about it as well.

“About six months ago we had this idea that it should spread, it shouldn’t be limited to us,” Rabbi Weinrib says.

The schedule is simple. Each rav learns by himself or with a chavrusa for an hour and a half to two hours a day, and then logs on to Skype for a daily 15-minute chaburah by rotation. “We’re talking in learning, having a schmooze about the sugya,” Rabbi Weinrib explains.

The material studied, by consensus, is the parts of hilchos Shabbos that are less learned. “The main halachos that most rabbanim deal with we’ve all done well — taaruvos, basar b’chalav, bishul,” Rabbi Weinrib notes. “We decided to focus on the lesser-known ones that are relevant on a frequent basis.”

They started with hilchos lash — kneading. Questions in this area come up often, as with how to best mash eggs and mayonnaise for the morning seudah. When they concluded the sugya in Cheshvan, Rabbi Doniel Neustadt, a prominent posek in Lakewood, delivered a synopsis to the group.

“All the rabbanim said as one that this was a great thing,” Rabbi Weinrib said. “It gave us the obligation to learn and to keep up with the chaburah. This is also different from regular learning since we do halachah l’maaseh. The rabbanim make sure to do it well because we have to pasken on this.”

There’s an old joke about a talmid chacham hired by an out-of-town community to be the spiritual leader. Shortly after his arrival, a local passed by and witnessed the new rabbi studying from a large tome. “What are you learning?” the native inquired.

“The halachos of basar b’chalav,” replied the rabbi.

This joke strikes a chord among out-of-town rabbanim; by and large, they are thoroughly familiar with the basic halachos required of a rav, but must constantly review the less-traversed parts of Shulchan Aruch that they may be asked about one day. Rabbi Weinrib’s Skype chaburah helps out-of-town rabbanim do just that.

But Rabbi Weinrib sees this chavrusahshaft as much more than personal or professional enrichment. “For an out-of-town rav to have a serious seder is simply a matter of survival,” he explains. “And everyone has to learn what they enjoy — but for someone in a smaller community, that isn’t always possible.”

He credits his father, Rabbi Yonah Weinrib, a renowned Judaic artist, for the creativity he used to harness technology as a solution for his chavrusa conundrum.

“My father is always thinking out of the box,” Rabbi Weinrib said. “He gave that over to his children, the drive to be creative.”

A few weeks ago, Rabbi Weinrib’s chavrusa flew to Eretz Yisrael for a chasunah. Instead of his seder slackening during that time, he joined Rabbi Dovid Schwartz of Providence and Rabbi Meir Bulman of South Bend in their Skype sessions.

“The whole thing is worth it just to be able to tummel in learning once again, to be back in the beis medrash again,” Rabbi Weinrib says. “One of the things about being an out-of-town rav is that it can get lonely. And when we get lonely, the way to connect is together, through Torah.”