he clocks have moved back, and in shuls across the country, booklets are being mailed out, posters are being hung in lobbies, and people are anxiously awaiting how the promise of “light refreshments” will be interpreted at the gathering. It’s scholar-in-residence season. Now, full disclosure, I am a bona-fide tier-three scholar-in-residence option. This very Shabbos I am in a community sharing Torah, meeting a new kehillah, and quietly apologizing to my wife between lectures because I forgot to pack the baby toys when we left before Shabbos. If you’re looking for a hashkafically ambiguous speaker at an affordable price that you don’t have to feel guilty about not even attempting to address in awkward third-person sentence structures (“Does the Rav want me to make the Rav a coffee?”), please consider arranging my visit to your community. But before you invite me or anyone else for Shabbos, please review this Top 5 list so you’ll know the issues involved.

If a shul has a scholar-in-residence but no fancy poster advertising the lectures, do they even make a sound? Once a community visitor has been secured, the most important work has just begun — designing the poster. Every poster needs three elements: (1) a picture, (2) a bio, (3) a speaking title.

The picture is always tricky. It should come with a warning, “Objects on poster may be older than they appear.” Every wizened speaker has the natural desire to use the youngest picture of himself that still has some tenuous resemblance to the current state of his face. But, you have to draw a line somewhere. Here’s an easy tip: If you have eineklach, it’s time to stop using your original wedding photo for shul appearances. I know the struggle — my hair started going gray when I was younger and I still cling to my more youthful photos. But you need to resist the urge. Poster pictures are not replacements for Rogaine or Grecian Hair Dye — or people will start coming up to you over Shabbos and asking, “When is your son speaking?”

There’s a pretty consistent rule governing the length of bio blurbs that describe the speaker. The length of the bio is inversely proportional to the speaker’s chashivus. If the speaker lists every award and accomplishment since being runner-up in the brachos bee in seventh grade, it’s a sign that you don’t have a tier-five speaker on your hands. They may be entertaining and great, but if they’re still mentioning their role as color war captain it’s likely that’s the most high-stakes battle they’ve been involved in. I always end my bio the same way: “Dovid has been rejected from several prestigious scholarships and awards.” Don’t mean to brag, but I’ve had some pretty important people tell me, “No thank you — don’t let the door hit you on the way out.”

The speaking title is how a speaker communicates to the audience whether they’re in for work or for play. One person’s “B’inyan Chatzi Shiur,” is another’s “Just a Nibble: When You Only Have Half.” I have an unhealthy relationship with whimsical titles and I need to learn how to say no to groan-inducing puns. The Agudah was not amused when I told them to rebrand daf yomi as “Paging Dr. Yomi: Just a Page a Day Can Keep Amaratzus Away.”

“So we’re going to have something Friday night, then the derashah Shabbos morning — usually we also have a shiur before Minchah.” Sounds great. The lineup for most scholar-in-residence visits is fairly predictable. But the one thing you can always count on is some last-minute addition. “If you don’t mind” — the first request is usually innocuous — “maybe you can also drop into the teen minyan.” But you need to draw lines. If you’re not careful you’ll be filling in for the baal korei and preparing daf yomi last minute. I once went to a weekend hotel to speak on Shabbos, and by the time Shalosh Seudos came around I was in the kitchen checking the lettuce for bugs.

There are few words as pretentious in the English language as “honorarium.” But there are also few things that people try to avoid discussing more than payment. Instead, all sorts of other substitutes are offered — exposure, hotel rooms, and free gifts. As a tier-three speaker, I’ve gotten used to the following: “Unfortunately, we are unable to pay, but we think this event could be great for your exposure.” Can you Venmo me exposure? Didn’t think so. My friend Rabbi Judah Mischel likes to say “Hold the honor, I’ll just take the rarium.” Kavod is nice — don’t get me wrong — but getting paid in honor is tough. Trust me, I’ve tried. I once offered my mortgage company shlishi. 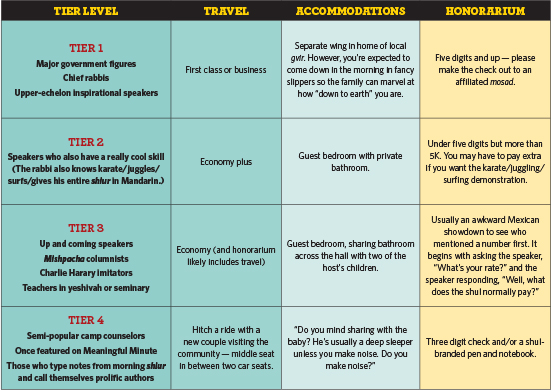 I think I heard this one already. Nothing is more frightening to a guest speaker than looking out into a crowd and noticing a bunch of people whom you know already know all of your best punch lines. Before I introduce a story, idea, or joke that I know people may have heard, I always preface it with the famous story from Rav Yitzchak Elchanan Spector. One of his students was in jeopardy of being drafted into the army, which would have likely meant certain death. News finally trickled to the yeshivah that the student had avoided the army. One by one, students ran into Rav Yitzchak Elchanan’s office to share with him the amazing news. Each time a talmid entered and told the Rav the breaking news, he reacted with the excitement of hearing it for the first time. He wanted each student to have the joy of sharing something wonderful with their rebbi. True story: I once shared this story with a chavrusa. He stopped me in the middle — “Yeah, I heard that one already.”

The moment has finally arrived. Speaker has been booked, honorarium sponsorship secured, and you wake up — somehow even more tired than before your nap — for the pre-Minchah shiur. The only thing left is to pass around the source sheets. I don’t know what people did before there were source sheets. People must have been like, “So we can all stop schlepping our entire home libraries to your class — cool, cool.” Trees, however, were probably looking on anxiously wondering, “So we’re doing this EVERY week?!” Nowadays there are two general approaches to the source sheet: tzuras hadaf and search-engine produced. Tzuras hadaf, where the sources are meticulously cut out and placed on the page, has a cozy authentic feel, but can sometimes make you feel like you’re trying to decipher the Dead Sea Scrolls. Just be careful before giving out source sheets — you need to make sure your audience is ready. Generally, if it’s during a meal, skip the source sheets unless you want your audience using your maarei mekomos as a napkin.

A sincere word about your guests: Whenever I speak to educators, I remind them that there was likely a poster, some clever titles, an outdated picture, and perhaps even an honorarium associated with their class. Always make sure that the most engaging part of the weekend is the Torah itself.

Special thank you to all the communities and organizations who are fully transparent in their invitation e-mails, whether they are asking for a favor or a paid opportunity. Talking about money is awkward, but the balance of that awkwardness should always be carried by the inviter, not the invitee!