Some may consider us odd, but only we are chosen by G-d 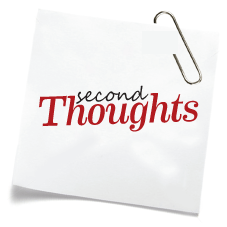 hose few who scale the summit of Mt. Everest invariably experience profound exhilaration at reaching the top. The difficulties of the climb, the obstacles to overcome, the discipline and courage that were required — all combine to make this moment the summit of one’s life.

Similar emotions swept through the 100,000 people who crowded the huge stadium in New Jersey to mark the completion of seven years of daily, rigorous Talmud study — a spiritual and intellectual summit.

Of course, not everyone who began the climb seven years ago made it to the top. It is a difficult trek, and some disappeared in the crevasses of discouragement and fatigue. But most persevered, overcame hazards, and dug deep into themselves for discipline and courage. They were rewarded with exhilaration and joy when they reached the summit of the grand Siyum celebration. The memories of arising at 5 a.m. to attend the daily shiur, of slogging relentlessly through snow and rain storms, numbing cold and stifling heat, only increased their sense of achievement. To paraphrase the old postal service meme, neither rain no snow nor gloom of night could stay these carriers of Torah from the completion of their appointed rounds.

One wonders: How many Greeks spend seven years, day in and day out, studying Plato? Are there daily study groups in Athens that read Socrates? Do the Chinese spend hours every single day in the study of Laozi? Are there chavrusas in Peking poring over his words? Would Londoners arise every morning and trudge through rain and fog to study the collected works of Shakespeare? Not very many, because Greeks and Chinese and Britons are quite normal. But Jews do not fit the mold. We are beyond normal, blessed with a Divine holy madness that enables us to do un-normal things, like continuing to mourn the ancient Bais, like maintaining hallowed practices of Shabbos, kashrus, taharas hamishpachah, bris milah — and like arising from a deep sleep every morning for seven straight years to attend sessions on oxen goring calves, or the differences between oaths and vows, or to plumb the depths of Love Thy Neighbor, or to learn about mikveh water emanating from mountain streams versus those from rainwater, or to discover how late the daily Shema Yisrael may be recited, plus thousands of other facets of Torah that seem totally irrelevant to daily life. As a famous couplet puts it: “How odd of G-d / To choose the Jews.”

The crucial difference between Talmud on the one hand, and Plato or Shakespeare on the other, is that sacred Jewish texts affect not merely the intellect, but also — and primarily — the Jewish soul. Oxen goring calves are on the surface irrelevant, but apprehending the subtleties of the analysis allows us, so to speak, to discern the Mind of G-d and to discover new ways of thinking. Talmud study is not, as some media termed it, “reading.” It does not require seven years to “read” 2000 pages. Talmud study is demanding, requiring focus and concentration. Through it we touch eternity and gradually — mysteriously and magically — we become different individuals.

The Siyum summit, celebrated during the recrudescence of anti-Semitism worldwide and even within a few miles of the stadium, was a powerful statement of Jewish eternity, plus a restorative balm for the emotional wounds inflicted by haters of G-d and Torah.

When one remembers that 60 years ago Orthodoxy was clinically dead, the sight of 100,000 Orthodox Jews celebrating the Siyum — plus tens of thousands around the world — was electrifying and awe-inspiring. (More about this miraculous resurrection in another column, please G-d.) Especially wondrous was it when, after completing the seven year study, they started — incredibly — again from the very beginning — like Mishpacha’s cover, “From Finish to Start.” Do those who climb Everest come back down and then immediately turn around and begin climbing again? Is not one Siyum HaShas enough? Why not go home and rest on one’s laurels? But this is the never-ending Torah. The summit must be scaled again and again.

The Greeks, the Chinese, the British, and the other nations will never understand. But Am Yisrael understands. Truly, Lo alman Yisrael: “Israel is not forsaken by G-d” (Yirmiyahu 51:5). Some may consider us odd, but only we are chosen by G-d.

Rabbi Emanuel Feldman
The Mashiach at the Gates: A Fable for Today

Envy is not only a bad trait; it is actually bad for you, and could shorten one’s life

Rabbi Emanuel Feldman
The Old Woman and the Siddur

She may have been Jewishly unlearned, but she possessed something not always present in contemporary religious life: devotion, surrender, and innocent, childlike trust before the Presence of G-d

Some call it “Orthodox,” but it simply means being a committed Jew

Successful negotiations are always the result of patience, perseverance, and dogged insistence on finding solutions to intractable situations