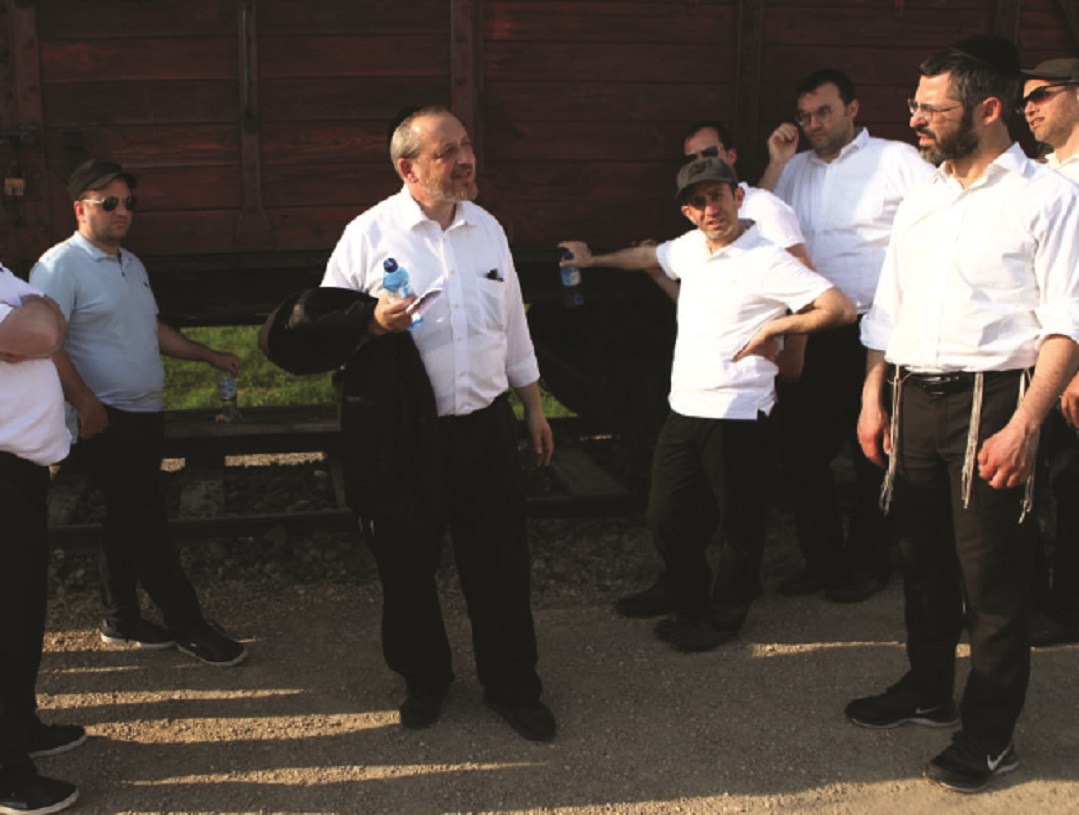 IT WAS FRIDAY NIGHT IN A RESTAURANT IN WARSAW.

I was chaperoning a group of seminary students who’d just fi nished a week of learning about the glorious history of Poland as a center of Torah and chassidus terminating with the devastation of the Nazi churban. Sitting there in the restaurant were a few elderly couples who were revisiting their roots.

Taking in the scene, it occurred to me to ask the venerable seniors if they had stories to share with the seminary students.

“Bernie,” said one the ladies, “you need to tell your story. It will be good for you. And the girls need to hear it.”

I could see the hesitancy in Bernie’s eyes, and I chimed in, “I know it’s di‑ cult for you, but it would be such an honor if you spoke to us.”

Reluctantly, Mr. Bernie Friedman, now a resident of the Five Towns, hobbled over to where we were eating. His weathered face highlighted soft brown eyes etched with the pain of the past. He took a deep breath and started to talk in a monotone, matter-of-fact voice.

“I grew up in a small town in Czechoslovakia,” he said, “and the last time I attended a shul was for my bar mitzvah. I was taken to Auschwitz at the age of 17. My new home was a fetid barracks with bunks stacked on three levels. The lucky ones had a middle bunk. The top bunks were exposed to the extreme weather and the lower ones were vulnerable to the rats who roamed freely. I had mazel. I had a middle bunk bed that I shared with three other inmates, three talmidim of the famed Yeshivas Chachmei Lublin of Rav Meir Shapiro.”

Bernie’s bunkmates were part of a group of bochurim who had arrived more or less at the same time. And there in the middle of Auschwitz, ripped away from any semblance of normal life, they formed a brotherly pact to continue their yeshivah studies.

“I know what you’re wondering,” he told the seminary students. “Because I was wondering the same thing. How can you learn without seforim?”

Bernie quickly learned that in order for these bochurim to be accepted into the yeshivah, they had been tested on 200 blatt gemara by heart. Now, in the Valley of Death, they had all that knowledge at their fi ngertips. “I’m telling you that what I am saying is true,” he said with quiet strength. “I saw this with my own eyes. The moment the Nazis stopped supervising us, the ‘yeshivah’ resumed its learning. And even during our work hours, there was not a moment when the bochurim weren’t talking in learning. In the fi elds, in the barracks, it was just amazing to behold. They were just 16, 17, or 18 years old. When I think back to those days, I am still in awe of the earnestness and erlichkeit of those boys. Rav Meir Shapiro really knew how to build talmidim.”

And then it happened. Bernie was invited to join the yeshivah.

“At first I thought it was a joke,” he told us, as his eyes saw a scene we could only begin to visualize. “I could barely remember a pasuk in Chumash! But they insisted. They taught me the basics and I graduated from Chumash to Mishnayos. Eventually I was ready to learn Gemara. Can you imagine? I learned Gemara for the very first time in Auschwitz! I even remember which perek we learned, it was Aylu Treyfus, the third perek of Chullin.”

As the days passed, Bernie watched the Gehinnom of Auschwitz take its toll on his new friends. One by one their pure bodies became emaciated and their souls returned to Hashem. The yeshivah was shrinking, and he knew it was just a matter of time before they’d all be gone.

“One evening in our barrack, as we were about to retire our bodies for the night,” he said, “I told the small group who had survived that I wanted to speak to them. I needed to ask them a question.

“This is what I asked: I understand why you are constantly studying Torah. For you, Torah is life. It gives you strength, it gives you the will to go on. By why are you wasting your precious strength and time on me? I am a beginner. I am not even sure how much I believe in these things.”

At this point Mr. Friedman paused. He was looking at us but it was as if he was looking through us into a place that was dark and distant. He spoke slowly and deliberately, as if to say, listen to the mindset of young men your age. Listen to how they reacted in a place where everyone else could only think about how to survive the next moment. Listen to the words of the bochurim that Rav Meir Shapiro created.

“Our dear friend, we are not stupid,” the boys told him. “We see what is happening here. We have seen our chaveirim die, and we know it is just a matter of time before it is our turn.

“But maybe, just maybe, one of us will survive. And maybe that person will be you.

“And if so, it will be your responsibility to make sure that Torah continues. Whatever you learned with us, you have to go out and teach it to the next generation. Build Torah institutions. Make sure that Torah is never forgotten.”

Bernie Friedman’s eyes welled with tears. He could barely get out the next words.

“They all died. Every single one of them. I am the only one who survived…” Maybe, just maybe, that person will be you.

Rabbi Menachem Nissel is a mechanech in Jerusalem and is the Senior Educator of NCSY. He is the author of Rigshei Lev: Women & Tefi llah and is a talmid of Rav Moshe Shapira ztz ”l.