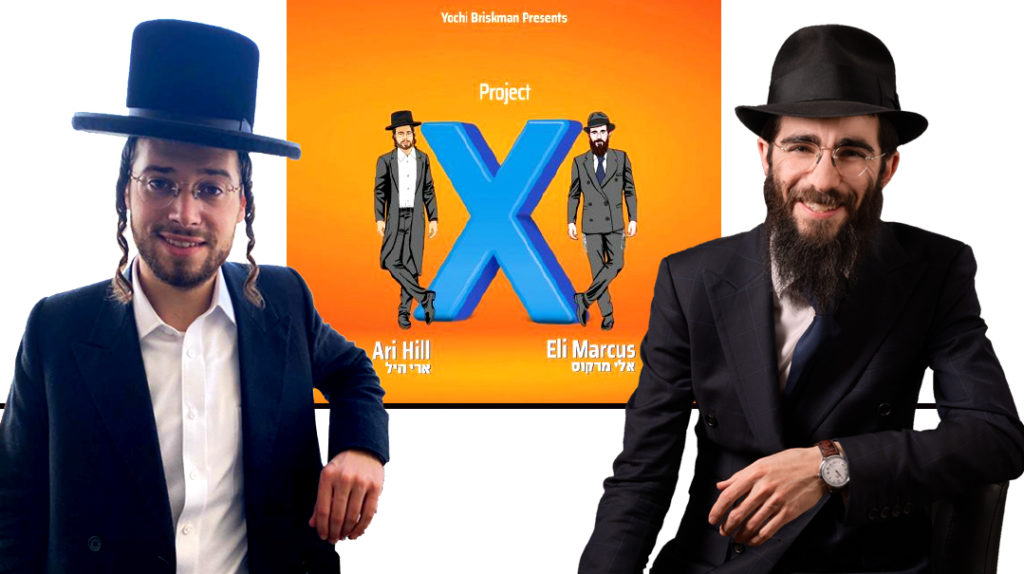 Nearly three decades after producer and orchestra leader Yochi Briskman put out the first in a long line of Project X albums, the latest PROJECT X is now on the shelves in time to grow the simchah quotient in the lead up to Purim. The newest album, 17th in the series, features ELI MARCUS and ARI HILL singing 35 dance songs, including many current hits and some classics too.

Yochi Briskman’s own musical journey and the series’ trajectory are intertwined. The first album, Project X — The Ultimate Wedding Experience, which set a trend in wedding hit medleys, was also Yochi’s debut musical production. And he says people are still asking where the name “Project X” came from.

Yochi was working as a wedding drummer and band leader, and helping other producers with their albums, when he first decided to produce his own wedding album. Each album-in-progress that the studio was working on was labeled with its name, but he didn’t want everyone who came by to see his own project, so he labeled it “Project X, Top Secret.” In the end, he says, “we actually liked the name, and so the ‘X’ label stuck.”

Although the first album was instrumental only, it was followed by a string of Project X and Project Relax albums featuring many singers, including Lipa, Shloime Daskal, Areleh Samet, Baruch Levine, Simcha Leiner, and Avraham Fried on a recent volume.

For the latest release, with Ari Hill and the Yedidim International choir based in Eretz Yisrael, Yochi Briskman and Eli Marcus in New York, and travel out of the question, Yochi had to prepare detailed maps of each set of vocals for the artists to follow. You’d never know, though — the effect is smooth and seamless. Before COVID and the closed skies, Yochi would likely have traveled to Israel for the recording sessions, but given the circumstances, he worked with Ari and the choir on Skype or Zoom.

Yochi is known for his precision, for which singer Ari Hill is grateful. “Everything ran so pleasantly, so precisely and punctually,” Hill says. “The actual recording of my vocals was accomplished in two and a half days of concentrated studio work, which is an incredible testament to how organized and talented Yochi is. These projects can sometimes take weeks, but with him, there was no balagan. I didn’t know all the material before, but once I learned the new songs, I was totally drawn into the atmosphere of the project. A few of the songs, like Shmueli Ungar’s ‘Kol Hamelameid,’ and Lipa’s ‘Mashkeh,’ became new favorites.”

Both Hill and Marcus are highly flexible vocalists, able to switch between chassidish and yeshivish inflections. Transitions of key and mood are smooth, and acoustic music is integrated with electronic sound in most of the medleys, which songs that have become popular second- and third-set wedding dance music. For more traditional tastes, the album’s fifth medley, starting with the Belz song “Odeh Hashem,” has a leibedig yet conservative chassidish sound.

With the endless spate of new songs to choose from, Yochi says he worked hard to narrow his original shortlist down from 70 songs to 35. Asked to pick a favorite from the eclectic range of artists and composers represented, Eli Marcus says he’s especially enjoyed singing the “Rosh Chodesh Kislev” niggun, a Chabad favorite, Yossi Green’s “Chesed,” and the warmth of Satmar’s “Hashem Hu Elokim.”