Slowly a look of pure horror dawned on their faces. The kiosk was locked and shuttered. A sign on the door read “CLOSED” 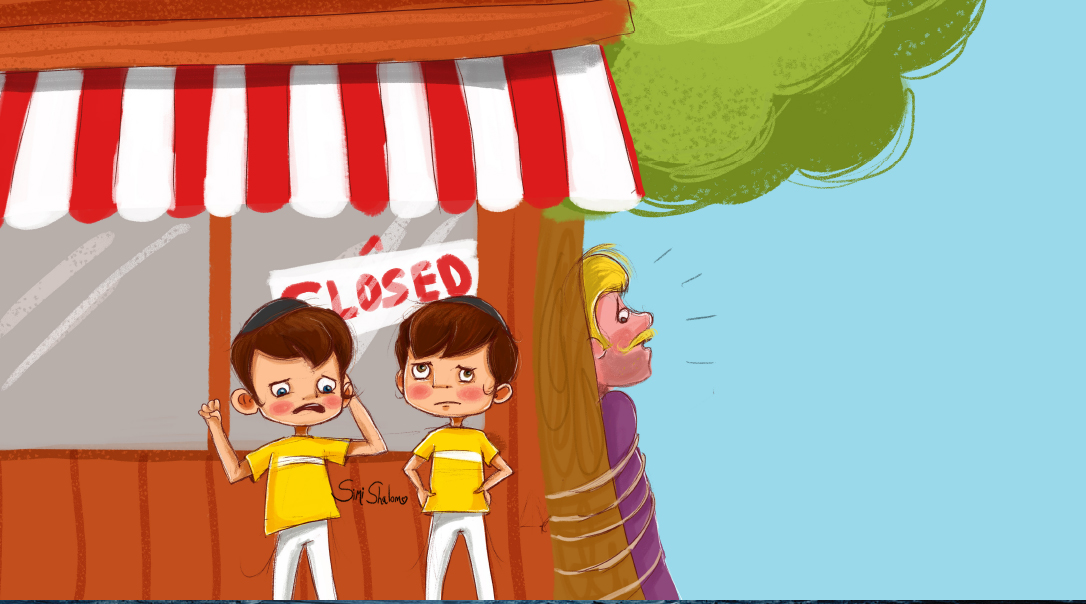 t had taken two weeks of intense campaigning, but Fishel and Faivish had achieved their goal:

They were off to the amazing new Xtreme Xperience outdoor activity center! Mr. Friedman was going to drive them there.

To persuade their parents to agree to pay the rather expensive entry fee, they’d had to meet a whole load of conditions. Mr. Friedman had set out strict rules of early nights, getting to school on time, and helping to clear the supper table. And unlike softhearted Mrs. Friedman, the boys knew there was no monkey business where their father was concerned.

It had been a grueling two weeks, but Fishel and Faivish felt they’d truly earned their trip. As they sat in the back of Mr. Friedman’s minivan, they fairly bubbled over with excitement. They’d heard all about Xtreme Xperience from their friends. There was white water rafting, rock climbing, and rappeling. Best of all, there was a game called knockerball that had been the subject of rave reviews — you climbed into a kind of giant bubble, and then rushed around trying to knock everyone else over.

“I’m over the sun and the stars, and they’re higher than the moon, so there!”

“Quiet!” roared Mr Friedman, whose Bluetooth conversation with a business colleague was being disrupted by the increasingly noisy bickering from the backseat.

For the next half hour or so, a tense silence reigned in the back, with the troublesome two leaning as far away from each other as possible. But as their father pulled into the parking lot, where a gigantic sign announced: “Xtreme Xperience — Xceptional for its Xciting Xcellence!” all hard feelings were instantly forgotten.

Barely remembering to mumble a “thank-you,” Fishel and Faivish tumbled out of the minivan and raced helter-skelter to the ticket kiosk to pay for their tickets. They pulled to a stop in front of the kiosk window, huffing and puffing so badly that it took a few moments to register something was wrong.

Slowly a look of pure horror dawned on their faces.

The kiosk was locked and shuttered. A sign on the door read “CLOSED.”

“What a disaster!” moaned Fishel.

“A tragedy,” groaned Faivish, forgetting to disagree with his brother in his distress. “Let’s call Daddy.”

Mr. Friedman was annoyed at having come out on a wild goose chase.

“Why didn’t you call first to check if it was open?” he asked.

Fishel and Faivish were about to hang their heads in shame, when they remembered that their mother had done just that, despite their protestations that it was unnecessary. And the person on the phone had clearly said it was open that afternoon!

“Look, I’m a busy man,” declared Mr. Friedman. “Why don’t you call Jolly Solly and ask him for help?”

Fishel and Faivish were soon dialing Jolly Solly’s number on their father’s cell phone. But, oh dear — the call went straight to voice mail. The clown must have been busy with one of his many mitzvah missions.

“What do you think Jolly Solly would tell us to do?” asked Fishel glumly.