“Buy pitah?” Bavli was incredulous. “I’ve never heard of such a thing. Maybe in the big cities.” 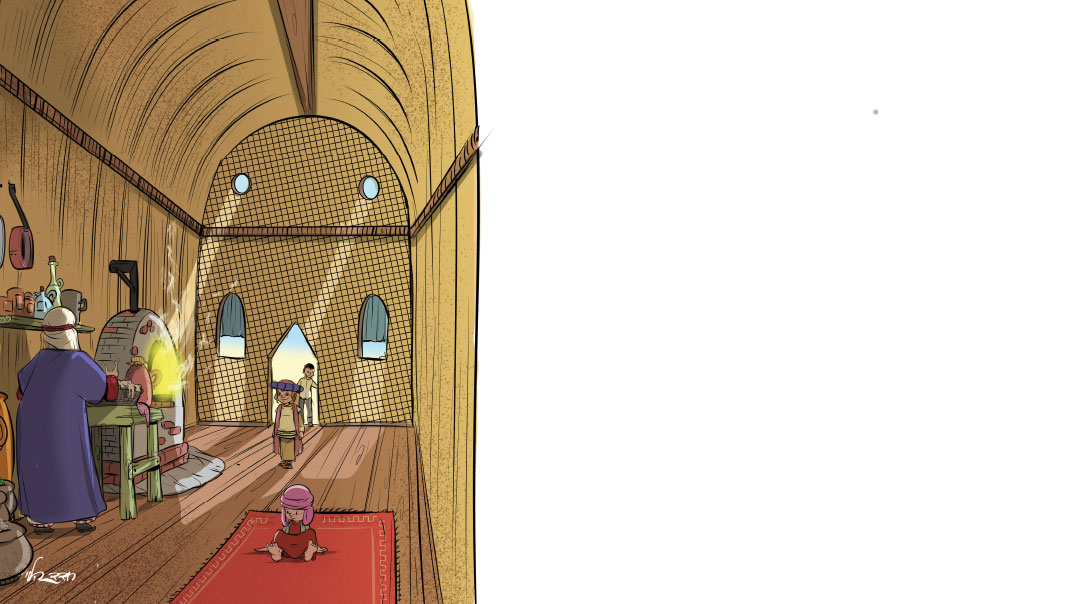 It had taken a moment or two, but eventually the two boys got over their initial shock. Doniel tried his best not to stare at the boy’s red tunic and purple turban. Introductions were made, and Doniel was relieved that Bavli seemed to accept his presence without asking too many questions. Bavli had been very taken with the fact that Doniel had a Tanachi name. Perhaps, in his excitement, all the usual questions one would ask in such an unusual situation had slipped his mind.

At some point, Bavli recalled the cup of water his father had requested, and he hurriedly led Doniel to the kitchen.

The first thing Doniel noticed when they entered the small room, was the lit furnace   against the wall. Then he saw a woman standing at a table. Beside her was a small child, though Doniel couldn’t tell if it was a boy or a girl.

While Doniel stood there awkwardly, Bavli took down an earthenware cup from a shelf and poured water into it from a jug on the table. His mother must have noticed their strange-looking guest, because Bavli started speaking to her with an urgent expression on his face. Doniel couldn’t understand what they were saying, though he was pretty sure he heard the words asidata and duchta. Was Bavli telling her that he came to this place from the future?

Bavli’s mother smiled and motioned for Doniel to come further into the room. Then she nodded her chin toward the cup in Bavli’s hands. Bavli ran to bring the water to his father, and quickly reappeared at Doniel’s side.

The boys watched as Bavli’s mother kneaded dough. Was she making challos for Shabbos? Those round flat pieces of dough she was shaping sure didn’t look like challos. The child jumped up and down. “Pitah, pitah.”

Bavli laughed and pulled Doniel’s elbow. “Come on, let me show you around. Soon we”ll come back for the evening meal and have some pitah fresh out of the tanur.”

“Wait a second,” Doniel said. “Your mother is making bread for dinner?”

“Of course,” Bavli answered, surprised. “Just like she does every day. Doesn’t your mother do the same?”

“Bake bread every day? No way! We just buy a loaf from the bakery.”

“Buy pitah?” Bavli was incredulous. “I’ve never heard of such a thing. Maybe in the big cities.”

The boys stepped outside. Doniel threw his hand over his eyes to shield them from the blinding sun. Bavli pushed his turban further forward on his head.

After his eyes adjusted to the light, Doniel realized that the woods had disappeared. He looked around, bewildered.

He tried not to panic. “Bavli, where are we?”

Bavli grinned mischievously. “I thought my name gave that away.”

Doniel took a deep breath. So, this was Bavel! Well, that did explain Bavli’s peculiar outfit, and the fact that Doniel had recognized some words. Of course, the people in Bavel spoke Aramaic. But how did he get here? Doniel shook his head. There was clearly no point in asking questions.