Imessed up two weeks ago, I think.

I had a conversation with the gaon, Rav Shmuel Kamenetsky, the Philadelphia rosh yeshivah.

Sometimes journalists speak truth to power and stare down world leaders, challenging the powerful and mighty.

This is a totally different game. This means sitting humbly before a gadol and knowing that he doesn’t need my questions or arguments to reach clarity, that the words have already been refined by an internal process, probed and scrutinized and examined by a method called daas Torah that happens in the mind of a talmid chacham.

The rosh yeshivah’s objective in the conversation was to reinforce the primacy and centrality of mekomos haTorah, to encourage those bochurim who may feel sluggish and unsure after months outside of the beis medrash, to remind us what the real goal is, after we fulfill our obligations as citizens and human beings. Vayachzor l’talmudo.

Our community demonstrated its fervor and passion when it came to opening camps, the rosh yeshivah felt, and yeshivos deserve no less.

But Rav Shmuel Kamenetsky is a gentleman, the sort of person who will put you at ease and chat for several minutes so that you feel comfortable in his presence. And in the conversation about Torah, he spoke of the uncertainty and turmoil in the street and expressed the hope that President Trump would win reelection.

I included that point in the article, of course, because it’s relevant and interesting. But maybe it was a mistake.

Not for the reason you think.

The biography of Rav Mendel Kaplan, a book filled with wisdom and insight, mentions that when he quoted acharonim during shiur, he sometimes didn’t credit an idea to its source. He explained that young boys might get distracted by the name — oooh, a Reb Chaim! A Reb Boruch Ber! Reb Shimon! — and not adequately focus on the idea itself. He didn’t want window dressing. There was time after shiur for the “b’shem omro.”

I thought about Rav Mendel’s understanding of the dangerous power of distraction when response after response to my article focused on the window dressing, not the core. There is no “also” when talking about Torah. It’s not “Torah is important and also vote Trump,” and perhaps the goal of writing articles that are not just informative, but also interesting, caused me to err in judgment.

As things played out, the quote about voting for Trump was more than a distraction. To many people that became the point of the article, which makes me a little sad. It wasn’t.

But sadder still are those who clearly don’t understand — or maybe even don’t like — the relationship between the Mishpacha community and its Torah leaders.

In the aftermath of the piece’s publication, there were a lot of comments, a lot of conversation, a lot of online traffic. Many outlets mentioned Rav Shmuel’s opinion; some went further and offered their own opinions too. In one instance, a frum journalist quoted another frum journalist — both nice people, who likely mean well — in a piece mourning the rosh yeshivah’s comments. Here’s the way it was put:

A number of moderate millennials in the community “are truly distraught over” the remarks.

Then there’s a quote:

“Many young frum Jews don’t want their spiritual leaders getting into politics,” she said. “It distressed them to hear this from a great leader, but they will not say anything about it.”

Far be it from me to argue with “many frum young Jews,” and the overwhelming data presented by the feelings of “a number of moderate millennials” is hard to counter — but let me try, just the same.

It works the other way. It’s about what they want from us, not what we want from them.

Rav Shmuel, like his father before him, lives his life between the shtender in the beis medrash, where he toils in learning and teaches others to toil in learning; and the phone, where he listens, counsels, and advises.

And those aren’t two different roles, but one. Thanks to those hours — decades, really — in the beis medrash, his counsel and direction are treasured.

(See the letter in last week’s magazine, “Behind My Shidduch,” for just one of many examples. A woman describes a conversation with several friends, all of whom consulted Rav Shmuel for advice navigating shidduchim: “And for a minute, we paused, awed by a gadol who was literally carrying the weight of the frum world’s thorniest issues on his back — yet for whom no problem was too small, no young girl too overwhelmed by shidduchim, to deserve his care and attention.”)

Now that doesn’t mean you have to vote for Trump, or that you have to vote at all. Differences of opinion caused the expansion of Torah shebe’al peh and different views among talmidei chachamim are legitimate, even praiseworthy.

But you don’t get to bully the rosh yeshivah into saying what you want him to say because of “the distress” of the people who wished he wouldn’t say that.

That approach is a spillover of cancel culture, in which people are thrust out of professional or social roles because what they said offended someone.

And this is where it stops. The Torah world is the last holdout.

In many homes or inside many succahs, you will find pictures of gedolei Yisrael. And often on the same wall, you’ll see leaders who held that voting in Israeli elections is a mitzvah and those who hold it’s a serious aveirah. Whatever your mesorah is, you revere both sides, because we don’t cancel, we welcome. We revere. We cherish.

I was once at a wedding in Yerushalayim, in one of those unlikely banquet halls under some stores, down a dark hallway, with mirrors and marble slapped on the wall and some bizarre lighting. Inside, there were bourekas and mushroom sauce and a poiker, the drummer with no playlist or notes or sheet music, just his imagination and energy.

An old-time Meah Shearim Yid was sitting at the table near me, a crusty sort of gentlemen with heavy-lidded eyes and a voice turned sandpaper by years of smoking unfiltered cigarettes. It was election season and he was doing a monologue about the religious politicians and their spiritual patrons as well, flicking his wrist to indicate his feelings for the whole lot.

Toward the end of the night, one of the roshei yeshivah closely associated with Degel HaTorah party, one of the great men of Bnei Brak, entered the wedding hall. My tablemate didn’t even look uncomfortable as he stood up to take his place on line for a brachah, leaning in close to whisper the name of his ailing wife to the rosh yeshivah.

It wasn’t shver. It wasn’t even a question. Yeah, he talked too much, like a Yankees fan dissing the Mets, but that was just white noise. In real life, his value system was intact. He wasn’t distraught or distressed as he faced the gadol, and there was no “say it ain’t so” expression of hurt on his face.

Then he went back to table, to savor his orange ices. He didn’t apologize or even feel a need to explain. Perhaps he even continued the diatribe, I don’t remember.

I do remember the look of satisfaction in his face, however. The night had been well-spent. He’d gotten a brachah from the rosh yeshivah to take home with him.

He got it. His father taught him many things — probably different from what my father taught me — but this is something every child knows, that every safety-conscious parent has imbued in their children.

Be careful around fire.

Just be careful around fire. 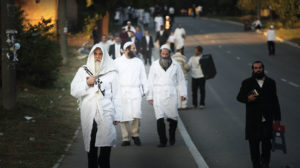