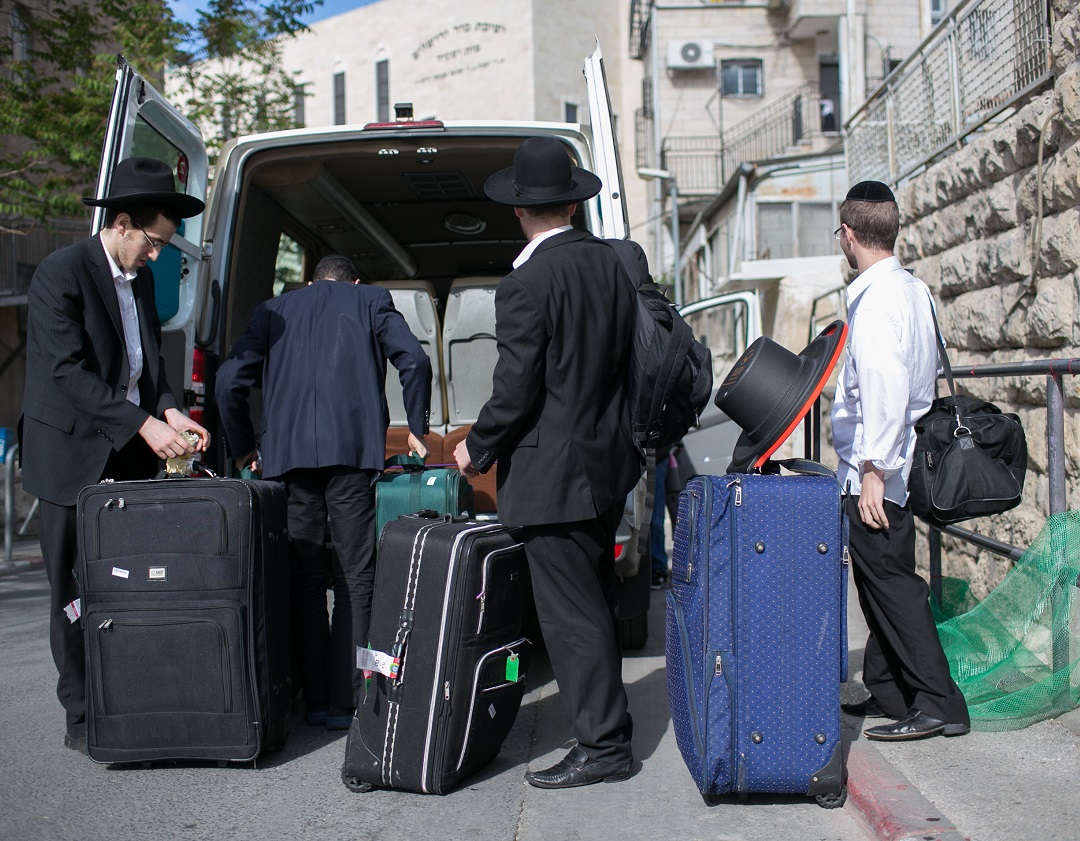 t’s the season of the soundless grumble.

The boys are back.

Some are home from Eretz Yisrael — those are the ones whose hat-bands have gone slightly green and like to carry their tefillin in shopping bags (Gal-Paz and Pharmacy Geula being favorite choices) and end conversations by saying “L’hitraot byyye” as if they were born in Bucharim instead of Boro Park.

Some come from Brisk. Doesn’t matter which Brisk the uncle nephew or cousin or whether they’re in shiur the hallway or still waiting patiently in a Geulah shul for the next draft lottery. They’re the ones who exaggerate the reish when they bentsh gomel peyos bobbing impressively as they announce to friends and family that they’ve arrived. Like an environmentalist or a vegetarian someone who learns in Brisk will tell you you need not ask.

Some come from Mir — that yeshivah that is a world all its own a kaleidoscope of shiurim and chaburos and buildings exploding with Torah — while others are fresh from one of the smaller yeshivos that dot the Holy City. The common denominator between them all is that they roll their eyes about American materialism and indulgence as they drive Mommy’s Infiniti to the dry cleaners where they dispense careful instructions about hanging not folded and not too much starch please.

There are bochurim home from local out-of-town yeshivos fresh from a long winter zeman and they’ll also make their presence felt high-fiving and fist-bumping friends they haven’t seen in a few month as they compare notes about who or what they know in common.

They park funny (do they know that there are white lines for a reason?) and daven late (we pay enough tuition can’t the yeshivos at least teach them about zeman tefillah?) and the shul needs triple the amount of coffee when they’re back (do they think this is a Starbucks?). Some smoke e-cigarettes others slam car doors too loud or stand in Century like teenage girls looking at socks. Socks!

This past Purim I was sitting with some people and a drunken 17-year-old bochur was acting in a way that appeared silly interrupting older people and saying things that generally make people squirm. Someone at the table remarked that there was nothing endearing about an inebriated teenager. An older wiser person replied “Yes but there is something endearing about a bochur and this is part of the process.“

No one stops to admire the sight of a seed as it absorbs water and its coat splits and its stem begins to push forward toward the soil. But when the rose stands in all its beauty the discerning viewer appreciates not just its current splendor but every stage of its growth.

A group of balabatim complained to Rav Yisrael Salanter about bochurim sleeping in the local shul claiming that there was an unpleasant odor when the townspeople arrived for Shacharis. “Perhaps ” Reb Yisrael told them “HaKadosh Baruch Hu appreciates the aroma created by the sleep of those who’ve toiled in learning all day more than that of your Shacharis.”

But it’s not just that each and every bochur you see has done something heroic over this winter pushed himself through a seder or pored over a Tosafos or closed his eyes and looked away at a moment when it was hard for him. It’s not just that bochurim are the most valuable national asset we have.

It’s not just about the stuff we can’t see — like how their every move is cherished in Heaven or the talmidei chachamim they will yet be — but even about that which we can see. It’s 2017 and the world has by and large given up on the teenage demographic and yet our boys are baruch Hashem coming home for bein hazmanim after six months in a yeshivah whichever yeshivah. They are seeds in mid-flourish the rough edges part of what will make them such exceptional productive choshuve adults. It’s in the middle of happening.

If your son is drinking directly from the bottle because he has dirah manners say “l’chayim enjoy your drink.” Don’t worry his wife will teach him. Maybe.

If you see a group of bochurim in the bagel store and they’re talking too loud or their chairs are blocking the aisle or one of them left his jacket by your table pay for their breakfast and bentsh them.

Google the basic habits of American teenagers or British or Canadian teenagers — the normal ones. Read how many hours a day on average they spend online and how they pass their time and how they view their parents and relate to them. Read (well maybe better if you don’t) about the leisure habits of students on campus.

And we have our bochurim.

So lift your eyes to Heaven and thank Hashem for your bochur with his too-long hair or habit of falling asleep on the good couch or his request for a new hat or suit for Yom Tov. (Yes I know his father doesn’t get a new suit every six months but I would hope that at this point his father already feels good about himself. An 18-year-old isn’t quite there yet.)

It’s never been harder to be a bochur to ignore everything outside and rise above it but they do it our boys. They go to the beis medrash every day and give it their all because they also know that thing about the process that it’s in middle of happening that even when it’s hard and they feel like giving up they’ve got to hold on because something big is happening inside of them.