How do police, entrusted with crowd control, make their split-second decisions in the face of a violent rioting mob? Las Vegas Metropolitan Police Department (LVMPD) Patrol Lieutenant Steve Riback shares some of the behind-the scenes training protocol and other tools to keep the fear away and his colleagues 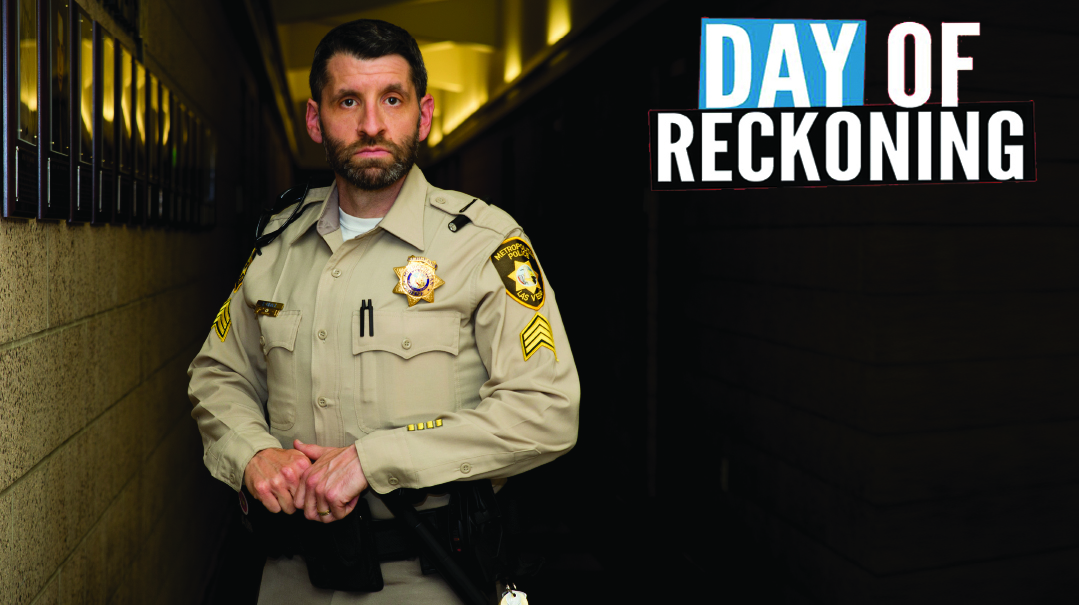 How do police, entrusted with crowd control, make their split-second decisions in the face of a violent rioting mob? Las Vegas Metropolitan Police Department (LVMPD) Patrol Lieutenant Steve Riback, a 23-year veteran of the force, currently in charge of the “graveyard shift” at the Summerlin Area Command, knows first-hand. This Orthodox Jewish officer, known as “The Kosher Cop” and author of the book My Journey Home, had his own tragic experience with violent rioters this past June, while trying to ensure that the Black Lives Matter protest over the death of George Floyd within the Las Vegas tourist corridor remain peaceful. It was then that his colleague, LVMPD police officer Shay Mikalonis, was shot during a confrontation with an armed protester. Patrol Lieutenant Riback shares some of the behind-the scenes training protocol and other tools to keep the fear away and his colleagues safe

What is the strategy behind crowd control, and how is it adapted to specific situations?

The main strategy within law enforcement, specifically crowd control, is to prioritize public safety – the safety of the individuals involved in the protest, whether they are participating or observing, as well as others such as tourists or passersby. In Las Vegas, our direction follows the guidelines of the Constitution, Nevada Revised Statutes, city and county laws, and departmental policies. We want to ensure that people’s First Amendment rights are being adhered to, but when there are situations where the lines are crossed, where there is an endangerment to public safety and where we may have to intervene – we take it on a case-by-case basis.

Speaking for myself, I would say a successful outcome is when people are able to express their First Amendment rights, and the police, if needed, can just stand by and observe and not have to get involved in any way. That means that both protesters and observers are safe, that there are no injuries, no arrests, and no type of police intervention occurring at all.

How does the scenario change when protesters are armed?

Here is where jurisdiction differences come into play. In Las Vegas, we are an open-carry state, so anyone can have a gun and put it in a holster on their hip and walk around. As long as it’s not concealed, you’re allowed to carry that gun without interference. We frequently encounter people who are armed. And in my experiences, there were often people during riots or during protests who’d strapped on rifles, shotguns, handguns, or a combination of them. So, until there is a threat or an issue involving the weapons, we generally leave it alone but keep an eye on them. We don’t stop people just because they have a weapon. We are more concerned about what are they doing with that weapon – or where there’s any potential threat occurring because of the weapon. When you go to other states though, it’s a completely different story.

In your observations of crowds and mobs, what is your understanding about mob dynamics and how individual people lose their judgment or reasoning when in a crowd?

There is definitely such a phenomenon as a mob mentality, and the things I’ve seen… you name it, I’ve witnessed it, from violence against officers, projectiles being thrown at us, all sorts of hate speech and rhetoric chanted in unison, graffiti and vandalism on signs, buildings and private property.

What are the different types of weapons and protection available to police in this kind of scenario and at what point would they use each one?

We have any number of tools on our belts, but I would say that the best tools police officers possess are their brains and their mouths. I think a lot of people outside of police enforcement don’t hold a high value to that, but within law enforcement, we absolutely do. You can de-escalate a situation just as much as you can escalate one with these tools. It’s very interesting because while working in some of these riots, you really get to see a lot about how people operate, the stress that’s induced.

It’s not an easy situation for law enforcement – especially because when a crowd gets out of control, you can easily see the destruction that results. The actual weapons law enforcement use will depend upon the jurisdiction or department. We have everything from handcuffs, pepper spray of various levels of concentration, to other low-lethal methods that could involve any number of substances like bean bags or rubber balls. None of these are deadly force options but they do make contact with the body, and it’s painful.

If there is a deadly force encounter and the situation warrants it, we may have to use a gun, rifle, or shotgun option. It all depends upon the scenario. If someone is shooting in a crowd, for example, it doesn’t mean that using your gun is immediately the best option.   Can you isolate the subject involved? What is your distance or proximity to that person? It is just not an absolute like on TV or in a movie. Just because someone has a gun doesn’t mean that you use your gun right away. But if you do, it has to be decided in a matter of seconds. That is why training is very, very important.

What kind of training do you get?

Speaking specifically for our department, we train pretty vigorously in Las Vegas. We have a lot of mobile field force training, along with refresher training and associated training along with it.

What is the line differentiating between a peaceful (although passionate) protest and an illegal gathering?

I would say the inciting of a riot or the committing of any destructive or violent act is the dividing line – but, again, that’s going to change by jurisdiction. You have a right to assemble but you may be violating local laws. You can protest on the sidewalk in certain areas of Las Vegas, for example, but the minute you step off the curb and into the street, you could be violating various laws that might be enforced during the situation.

How do you stay calm and unafraid? Does your training prepare you for it?

Again, a lot of the training I’ve done, and that we continue to do, absolutely helps. We try to prepare through scenarios and reality-based training, whereby the decisions we make become second nature and not something that needs to be thought about right then and there. If we need to respond in a certain way, it’s no longer like the first time we’ve addressed or thought about such a situation. It’s something we’ve rehearsed and practiced. For me, as a frum person, my trust in Hashem helps me tremendously to get through these stressful situations.

Have you noticed any correlation between environmental factors, such as weather, and the behavior of the crowd?

Definitely. Circumstances change based upon the weather. Statistically, do people commit less crime when it is very cold out or raining? Absolutely. When it’s nice out, when it’s warm, people are outside and engaging in more activities, possibly drinking more, and unfortunately, sometimes when people are together, that can create some contentious situations. Now with COVID, what do people have to do, especially in the cities where they’re under complete lockdown? They spend their days on social media, which is often the sole basis for their news and information, and that’s how their anti-police opinions are formed – misguided as they are, and untrue when you look at actual statistics and facts. Many “facts” that are being promoted out there are not even close to reality, which contributes to the contentious feeling and animosity toward police.

Have you ever personally felt scared?

Certainly! During the June riots, standing in a large, contentious crowd and working in the capacity of a police officer while hearing the rhetoric of anger toward police, of doing harm to police, of death to the police, all the while getting debris thrown at you, such as rocks and concrete and frozen water bottles that turn into deadly missiles – it’s scary.

Sure, there were peaceful people out there, but as soon as one person in a crowd becomes violent, the situation is no longer peaceful at that point, because the inciting of the riot and the mob mentality is a real occurrence.

We’ve had officers die in the line of duty and officers getting badly injured, like Officer Mikalonis. He was a great cop who was defending this city and its citizens, standing there letting people carry out their First Amendment rights. He was shot in the face and is paralyzed from the neck down, probably for life.

As a supervisor, my job is to ensure the officers go home every night. These men are my children, my family, so I feel an inherent responsibility to keep them safe and get them home every night. In my line of work, unfortunately, that doesn’t always happen. 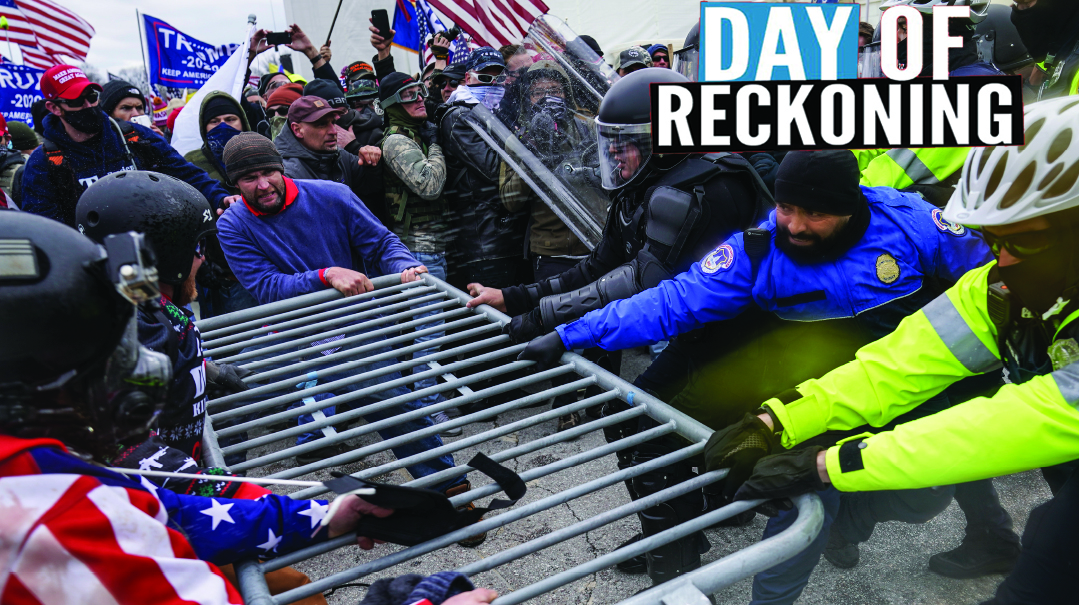 We can only begin to decipher the disturbing scenes of Wednesday’s lethal raid on the Capitol by asking the right questions: What allowed these events to morph from the unthinkable to reality? 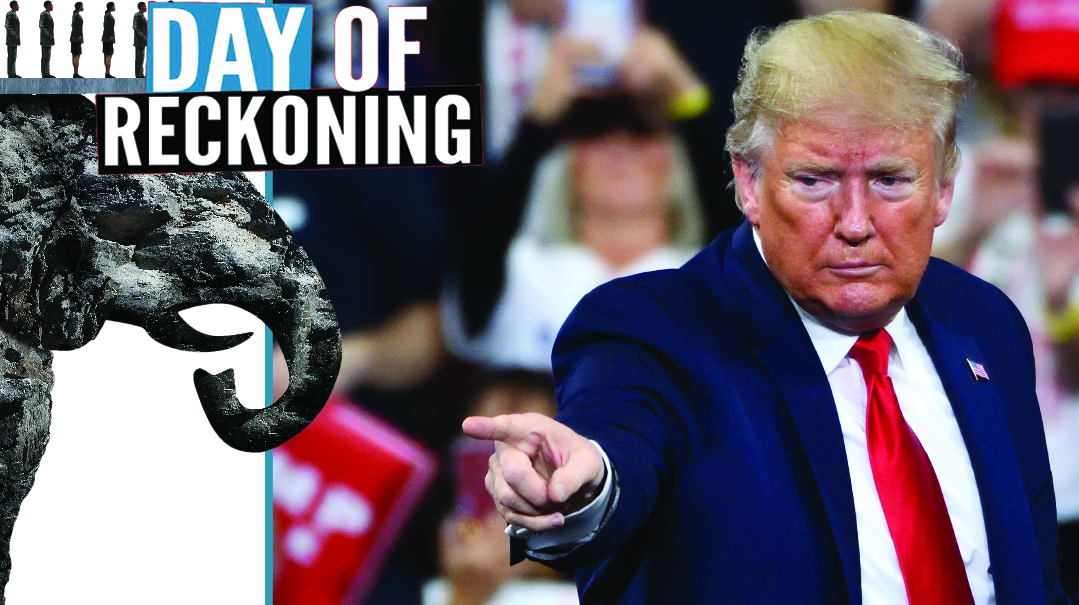 Binyamin Rose
The GOP’s Day After

Where does the GOP go from here? With the Trump era at a sudden and shattering end, how can the party find new leadership and continued relevance?