Eli wasn’t at all pleased with the situation. However, he could not get Tuki and Manny to make peace 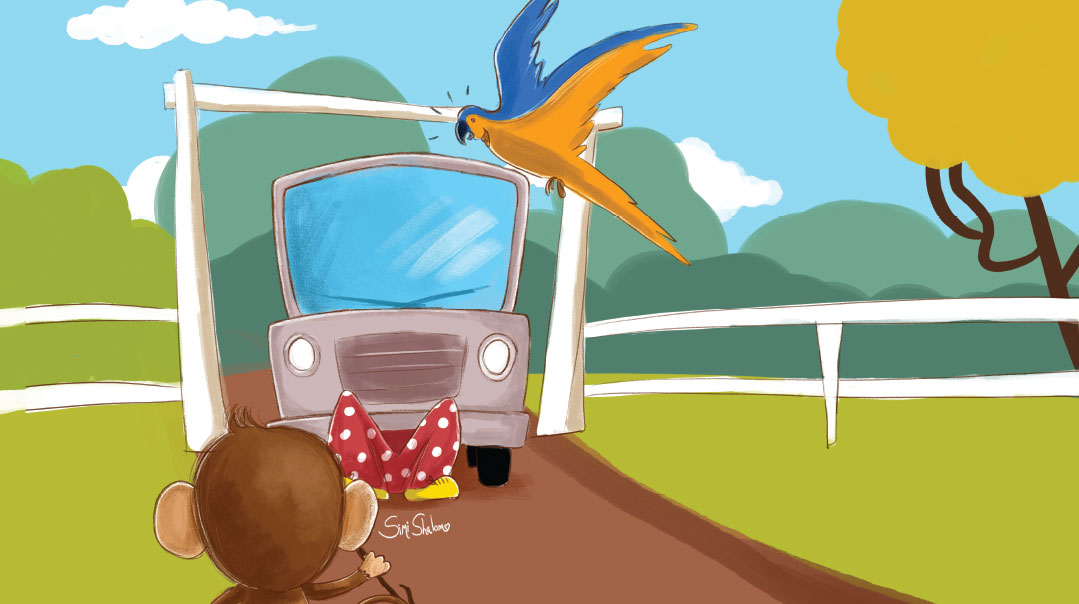 Oh, dear. Things were rather tense at Eli’s place. It had nothing do with visitor numbers. Those were only going up. And the animals were all healthy.

The problem was Tuki the parrot and Manny the monkey. They had always been good friends, but not anymore. It started when Manny crept up behind Tuki one day. Tuki was dozing, but he soon woke with a squawk! That’s because Manny plucked a feather from Tuki’s tail. Tuki took great pride in his feathers. He reacted with fury, trying to peck Manny with his beak. The monkey escaped just in time. He climbed to the roof of Eli’s house. From there he grinned at Tuki.

The furious parrot began ear-splitting screeching. This brought Eli running. When he saw Manny on his roof, he put two and two together.

“You’ve been starting up with Tuki,” he told the monkey sternly. “You’d better watch out. If not, I won’t let you free during the day anymore. You’ll stay in your cage.”

Manny pretended to hang his head. Eli, however, saw the monkey’s eyes gleaming. Eli decided to keep an eye on the monkey.

Meanwhile, Tuki bided his time. The parrot waited until Manny was busy eating a banana. Then, in a voice sounding just like Eli, he said, “Bedtime, Manny. Time to get into your cage.”

Manny put down his banana disappointedly. Why was Eli sending him to bed so early? Still, he knew there was no arguing with Eli. Not when he used that tone of voice. Head down, Manny shuffled glumly to his cage. He waited for Eli to unlock the door.

He waited and waited, but there was no sign of Eli. What was going on? He could have finished three bananas in this time! Then a sound made him look up suspiciously. It was Tuki. The parrot was chuckling and looking pleased with himself.

Manny jumped up in a rage. It had been a trick! He tried chasing Tuki, but the parrot flew out of reach. Furiously, the monkey jumped up and down, making angry noises.

Eventually all the fighting upset the other animals. Eli wasn’t at all pleased with the situation. However, he could not get Tuki and Manny to make peace.

“I need help,” he muttered to himself. Then his face brightened. He knew just the right person. Jolly Solly, of course!

It didn’t take long before the clown was driving through the gate. Jolly Solly sensed right away what was wrong. Tuki failed to fly to the clown’s shoulder. Manny lay gloomily on a bench.

Suddenly, Jolly Solly’s car started making loud clunking sounds. Smoke poured out of the engine. The clown stopped the car and jumped out. He looked inside the hood and started shaking his head. He got out his toolbox. Then he disappeared under the car, with only his feet sticking out.

Tuki flew over to see what was going on. He hovered above Jolly Solly’s feet. Manny, who adored Jolly Solly, also came closer.

Tuki glared at the car.

“Haman!” he screeched back. “Bang-bang-bang!”

Manny grabbed a branch from the ground. He waved it threateningly at the car. Maybe the clown was in danger. It was time to act!