Anumber of years ago, I received one of the most memorable and bizarre phone calls of my life. A courteous gentleman, identifying himself as Korean and a student of religion, wanted to ask me a number of questions about Judaism. His seemed genuinely sincere, so I allowed him to ask what was on his mind.

“Who is like the pope of the Jews?” he wanted to know.

I told him that we don’t feature that official position; nobody is actually elected leader of the Jews through puffy white smoke or ballot boxes.

“If that’s the case,” he persisted, “then who becomes the leader?”

“Could you give me a name of one of those men?” he asked.

The first name that came to mind was Rav Elyashiv ztz”l.

I had to explain that not only does this gadol b’Yisrael not have a website, he probably never touched a computer.

My new friend must have been utterly confused.

In all seriousness, we do not elect our gedolim and manhigim, nor have we ever. Klal Yisrael has always gravitated to those who we felt possessed that certain something that made them fit in our eyes to lead us and guide us. This may actually be implied in the Gemara (Sotah 48b, Sanhedrin 11a) that states that Hillel Hazakein’s colleagues heard a bas kol (heavenly voice) that “someone is fit to have the Shechinah rest on him” due to his humility, piety, and leadership qualities. Although the name of this individual was not specified, Hillel’s colleagues all pointed at him as the definite subject of the bas kol.

Perhaps the Gemara is alluding to the very idea that a Jewish leader does not need to be declared or coronated. We can figure it out.

Those outstanding individuals do not seek leadership positions, and often shy away from them due to their great humility. When I was learning in Eretz Yisrael back in the ’80s, it was common knowledge in the yeshivah world that the aging gadol hador, Rav Shach, was trying to persuade the rosh yeshivah of the Ponevezh Yeshiva L’Tzeirim, Rav Aharon Leib Steinman, to assume a more public role. As we all learned with time, Rav Shach knew who this man was, but Rav Aharon Leib wanted no part of it then. Hashgachah caught up with him, however, and he became one of those unique manhigim who shared his chochmah and eitzah with all of Klal Yisrael.

Giants such as the Chazon Ish and his brother-in-law the Steipler, as well as their nephew and son, Rav Chaim Kanievsky shlita, did not even occupy official positions at the head of any yeshivah at all. It should come as no surprise to us, then, to hear a comment Rav Shlomo Heiman, rosh yeshivah of Torah Vodaath, shared after speaking in learning with Rav Moshe Feinstein when the latter was just 45 years old.

“You know why Rav Moshe is growing into the posek hador?” he remarked to his chavrusa, Rav Dovid Bender. “Because his back never touched the back of a chair while learning.”

The great ones recognized the next great ones: those who put every iota of their energy into toiling in Torah. Nobody elected Rav Moshe posek hador; nobody had to.

Those of us who are old enough to recall the eight-month period when Klal Yisrael lost the Steipler Gaon in Eretz Yisrael in the month of Av, and the two leaders of Torah Jewry in America, Rav Moshe and Rav Yaakov Kamenetsky, in the following Adars, can remember the feeling of utter devastation upon the loss of those giants. It seemed to be a blow from which we could never recover.

Yet two teachings of Chazal softened the blow. On the pasuk “V’zarach hashemesh u’va hashemesh,” the Gemara teaches that before the “sunset” of one leader, HaKadosh Baruch Hu has already arranged the “sunrise” of the next. We may not know who or where he is, but we do know that we have not been abandoned. Second, Chazal insisted that “Yiftach b’doro ki’Shmuel b’doro.” Even as we mourn the loss of the giant of one generation, we know that the next generation will have the leaders to shepherd it. Despite the inexorable yeridas hadoros, Chazal mandated that we are obligated to revere and follow the gedolei hador of our generation exactly as in previous generations. It is not up to us to “grade” their gadlus. We need to trust that we will not be forsaken and left with nobody to guide us through the lengthy galus until the coming of Mashiach.

What does this have to do with us? Are we meant to merely sit around and wait for these leaders to appear out of nowhere and save the day for us all, or do we have an active part in this process?

Once again, Chazal have given us our marching orders. The aforementioned Gemara states that had the generation merited it, Hillel could have reached the level of Moshe Rabbeinu (according to the Rambam, Shemoneh Perakim 7). This means that we create our gedolim, and the level of our leaders is a function of our levels of kedushah and adherence to the Torah. Even those of us who will not be the ones to carry the mantle of leadership have a hand in producing the one who will. (See Mishnas Rav Aharon, Volume 3, p. 229.)

It stands to reason that the loftier a level we personally achieve, the higher we raise the foundation for those who will actually rise to the top as manhigei Yisrael. The more we value ameilus b’Torah — through speech, action, and our own limud — the more we will merit having manhigim whom we admire and respect.

Rav Aharon Kotler related in his eulogy of Rav Elya Meir Bloch, rosh yeshivah of Telshe, that the Alter of Slabodka said the most significant influence Rav Yisrael Salanter had on him was conveying the importance of putting one’s mind exclusively into in-depth Torah learning while concerning one’s heart with the overall spiritual situation of Klal Yisrael. Rav Yisrael personified this to the highest degree. Rav Aharon added that young talmidei chachamim, whose main avodah is to become great Torah scholars, do not yet have the wherewithal to be involved in the tangible forms of zikui harabim, but they are preparing themselves to eventually become those who act on behalf of the tzibbur. In more contemporary times, one needs only to study the lives of the Chazon Ish and Rav Shach, to name just two, and see how decades of total immersion in learning prepared them to become the gedolim and manhigim they ultimately were.

It is imperative for all of us, then, to do our part in paving the way for our leaders to develop. By striving for greatness and maximizing our own potential, we will maximize the greatness of our leaders.

The recent petirah of Rav Avrohom Chaim Levin, the rosh yeshivah of Telshe, Chicago, should spur us to emulate the maalos he personified as an American-bred ben Torah, as Chazal teach us that after the great Amora Rav left This World, each of his disciples adopted part of his spiritual legacy to fill the void he left behind.

The Rosh Yeshivah possessed sensitivity coupled with a keen understanding of human nature. During a particularly tragic shivah, he came to the beis avel every day, sat for ten minutes saying absolutely nothing, uttered the words HaMakom yenacheim es’chem and left. When the grieving family was about to get up from shivah, he finally spoke, instructing them to focus on simchah and move forward with a renewed sense of mission.

One of the aveilim shared with me that of all nichumim the family received during shivah, nothing was more powerful or meaningful than those ten minutes of silence. There truly was nothing to say.

Perhaps only a Torah giant infused with the mussar of the previous generation could achieve the heights of sensitivity that he did. But we can learn in some small way to be more sensitive to the plight of others, and become more elevated as a result. It will make us — and our new manhigim in turn — greater.

A number of years ago, I met Rebbetzin Katz, the late almanah of Rav Chaim Mordechai Katz of Telshe Yeshivah, and she gave me the strongest mussar shmuess I ever received. She asked me if I remembered the brachah her husband had given me when he stayed in our home back when I was a small child. After I shook my head no, the Rebbetzin told me, “The Rosh Yeshivah bentshed you that you should become a gadol b’Yisrael — don’t turn his brachah into a sheker!” I’m sure I wasn’t the only recipient of such wishes. Rav Mottel, keenly cognizant of the churban he had left behind not 20 years before, had been focused on rebuilding what was lost. Gedolei olam of an unimaginable caliber were lost to us in the Holocaust. The void had to be filled, and he apparently felt that maybe this little boy could be a step in that direction.

In this season of kiyemu v’kiblu — a new acceptance of Torah, as described in Megillas Esther — we should all do our part to help our generation merit great leaders through our own meritorious actions. True, we will not see Hillel Hazakein or the Chofetz Chaim, anymore, but we will merit to see the greatest possible leaders for our own generation.

Originally featured in Mishpacha, Issue 749. Rabbi Plotnik, a talmid of the yeshivos of Philadelphia and Ponovezh, has been active in rabbanus and chinuch for 25 years and currently serves as ram in Yeshivas Me’or HaTorah in Chicago. 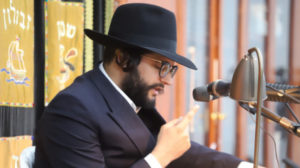