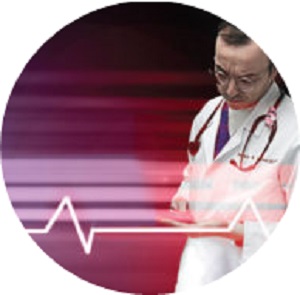 im walked into the ER on his own two feet, but he claimed he wouldn’t have made it another step. “It hurts here,” he said, laying a large red hand just above his abdomen. A preliminary exam turned up no abdominal indicators, but the patient was sweating. Could he be misjudging the source of his pain? Could this be a cardiac event?

“Let’s do an EKG,” I told Sharon, the nurse. She wheeled the EKG machine near the patient’s bed and pulled out the leads.

The patient removed his shirt. Tattooed across his chest was a swastika.

I blinked. Sharon looked down too and stopped talking.

I glanced at Sharon. What did the swastika mean to her? Was she thinking of the original white supremacists, the KKK, and everything associated with them?

The patient looked directly at me. “I was young and stupid when I did that,” he said. There was a plea in his voice, please believe me. “I know how much hurt it can cause and I regret it. I know how stupid it was. I hope you can get past it and treat me.”

Maybe he was just vulnerable and desperate.

Maybe it was sincere regret.

Before he even finished speaking, Sharon and I were moving again. In the ER we treat everyone. We are doctors, not G-d; professionalism is an essential part of the care we provide.

Although we occasionally get patients who say, “Get me another doctor, I don’t want a Jew/Asian/African American treating me,” discrimination has no place in our hospital where the policy is to disregard such requests.

We’re human; the whole foundation of the medical profession is compassion. Of course we have feelings. But those feelings have no role to play in deciding who gets care.

This wasn’t my first encounter with this conflict (and it won’t be the last). A while ago we treated four victims of a horrific car accident. A drunk driver had crossed the double yellow line on the highway at 85 miles an hour and hit an oncoming car head-on. The other driver was killed instantly. His wife was critically injured; their two kids in the back seat sustained multiple broken bones and head injuries.

The details that trickled in with gruesome mundaneness made it even more devastating. Like the fact that they were on their way to a wedding. And that the kids were twins. And that the father was a cancer survivor. And that it was the drunk driver’s third DWI. His third DWI!

The woman was rushed to the OR to treat an abdominal injury. She was under anesthesia and sedated. When she woke up someone was going to have to tell her that her husband was dead.

The two kids were in terrible pain, disoriented and terrified. Their father was dead, their mother would be out of commission for months. Would she ever be the same person again? As we stabilized and reduced their broken bones and sutured their lacerations, we couldn’t help but wonder who would care for them in their recovery. Who would care for them when they were discharged?

We worked quickly, carefully, gently, trying not to cause any unnecessary discomfort, wishing we could make it all better. You look at these kids and you see your own, you look at their future and your heart breaks. Such a beautiful family.

You feel angry, outraged that this could happen, furious at the cavalier destruction of four normal lives. Powerless to change things. Disgusted that someone could behave with such reckless, irresponsible disregard.

And then you walk 50 feet across the room and start treating the drunk driver.

How do we do it? How do we reconcile the kindness we’re committed to with the cruelty they’ve committed?

How do you save a murderer’s life?

How do you treat a guy with a swastika tattoo?

How do you swallow your personal feelings and behave completely professionally?

The answer is that the greatest victory over that cruelty and hate is that professionalism. Our victory is that we don’t perpetuate the evil.

Tim with the tattoo turned out to have a simple case of bloating and heartburn after eating a heavy mushroom barley soup at a new deli down the block. He was treated with an antiemetic and H2 blockers and released, and Sharon, the African American nurse, commented to me that she took comfort in his demonstration that people, even haters, can change.

And the Orthodox Jewish doctor? He took comfort in his knowledge of G-d, that He runs the world, and that doctors and nurses don’t have to make choices about whom to treat, because life and death is the territory of G-d alone. He created this world with all its good and evil, and I will fight to stay on the good side, doing the job He set for me, until the day when evil will be eradicated from the face of the earth.