“It’s a horrible day,” Mr. Krankowitz snarled. “My doorbell has been abused, and my roses attacked. Bah!” 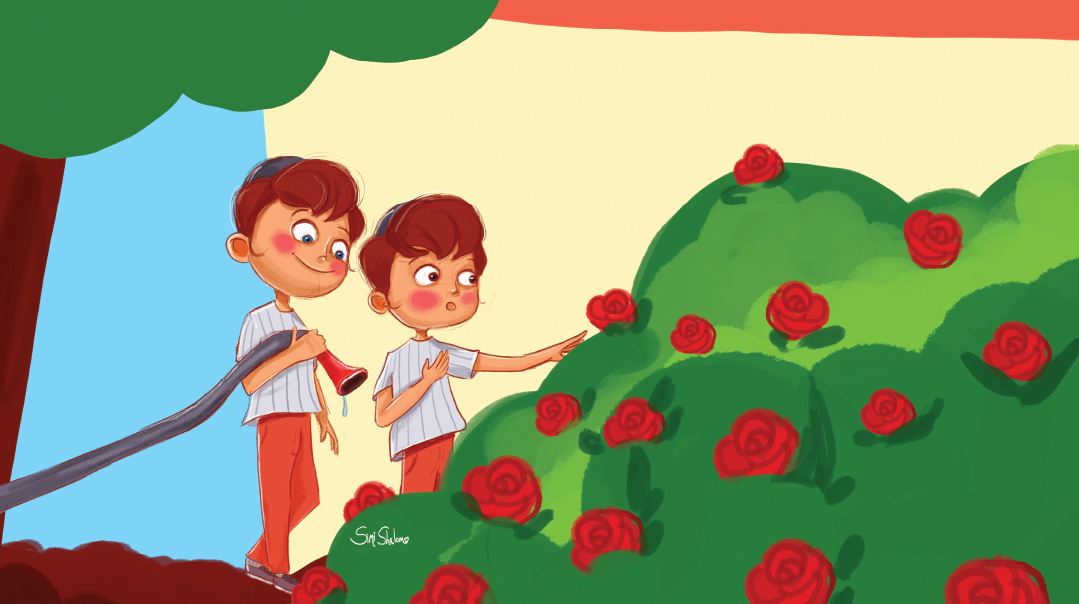 I t was close to Tishah B’Av, and after a fiery speech from their principal, Fishel and Faivish decided to improve their bein adam l’chaveiro skills.

They thought it over (for five seconds between wolfing down their supper and zooming up and down Sunny Lane on their scooters). Then Fishel and Faivish came up with a brainwave: “Operation Be Kind to Mr. Krankowitz” — or OBKTMK, for short.

The old man wore a constant scowl and was always complaining about anything and everything. But Fishel and Faivish were sure that once they showered him with kindness, all would be well.

The first step in OBKTMK, they decided, would be to do Mr. Krankowitz’s shopping. They rang enthusiastically on his doorbell. Ding dong! When there was no reply, they rang again for longer. Diiiingg Dooooong!

They were just wondering if the old man had gone out, when the door flew open. There he stood in a towering rage.

“What do you think you’re doing, ringing the bell like maniacs?! Go away! Whatever you’re selling, I don’t want it.”

“Er… well, actually, we came to ask you—” began Fishel.

“Go ask someone else!”

“We wanted to know if you need—” tried Faivish.

“The only thing I need is peace and quiet. And without you ringing my doorbell. Now, scram!”

The door shut firmly in their faces.

Fishel and Faivish eyed each other warily.

“Yeah. We gotta keep trying.” Faivish agreed with his brother for a change.

When they noticed the old man’s rosebushes, Faivish had an idea.

“Why don’t we water his roses?”

“And ring his doorbell again?”

“We’ll just do it without telling him. Then he won’t have to lug that heavy watering can around. He’ll be delighted! If we use our own garden hose, we won’t even have to go into his front garden.”

In no time at all, the hose was hooked up. Fishel and Faivish prepared to aim a stream of water onto Mr. Krankowitz’s rose bushes.

Suddenly, they were interrupted by a loud roar.

“Actually, we’re helping you, by watering them.”

“So you won’t have to lug your watering can around,” added Faivish.

The old man shook his fist and lunged for the hose.ri

Fishel and Faivish hastily pulled the hose away. After all, the principal surely didn’t want to risk their lives.

Just then, a car drove past. A cheerful, open-top car, with Jolly Solly at the wheel. He slowed down.

“It’s a horrible day,” Mr. Krankowitz snarled. “My doorbell has been abused, and my roses attacked. Bah!”