Let’s explore billboards — the funny, the sad (literally — it’s crying!), the brightest, noisiest, smelliest — and much, much more!

illboards are so much more than just an advertisement. A billboard is a huge, make-you-think, out-of-the-box way of saying something. Let’s explore billboards — the funny, the sad (literally — it’s crying!), the brightest, noisiest, smelliest — and much, much more!

Billboards are sometimes strategically placed on tunnels and bridges… and sometimes even around telephone wires! Check out this cleverly placed picture on the entrance of a tunnel advertising an Oldtimer Rest Stop in Austria from 2007. There’s no glancing away when you’re heading right into its jaws!

In 2007, a mini sports car called the Brabus Ultimate in the Netherlands was advertised with this extremely clever billboard. It was carefully arranged along the side of a lift bridge, so each time the bridge lifted up to allow ships to pass below, it looked as though the car was jumping in the air! The ad was a humongous success: Over 2000 of those cars were preordered before they even hit the dealerships!

Billboards weren’t always so exciting. The earliest billboards were hand painted by merchants to advertise their wares. In approximately 1835, the first large 50-plus-square-foot poster was printed by Jared Bill, letting people know that the circus was coming to town.

In 1908, the first car was invented — the Model T automobile — which meant that people could now travel on highways and back roads… and the world of roadside billboards was officially launched! Back then, the fastest you could drive on the highway was about 35 mph, which meant that long drives took double the amount of time they do today… and there was no car radio back then! (Sounds super fun, right!?)

In 1925, the Burma Shave company became popular by capitalizing on the boredom of highway driving: They posted a series of billboards with funny messages. For instance, the first billboard said, “TWOULD BE MORE FUN…” Then a few miles later the second billboard read, “TO GO BY AIR…” The third billboard, further down the highway, said, “IF WE COULD PUT…” And the last billboard read, “THE SIGNS UP THERE!”

Billboards aren’t only paid for by big companies that want you to buy their products. Sometimes they’re sponsored by the government. One of the most famous examples is the “I want YOU for U.S Army” posters that first appeared when America entered World War I in 1917, drawn by James Montgomery Flagg. It shows a man known as Uncle Sam (Uncle Sam = U.S.) with a white goatee and bushy eyebrows pointing a bony finger.

The poster was very effective. More than 4 million posters were printed in the last year of World War I alone! 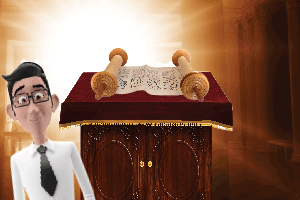 What is your shul like? Is it big? Is it small? Is it a basement with some folding...