“Oh.” Talia glanced out the window. The tzedakah woman was still there, waiting to prey on other unsuspecting shoppers 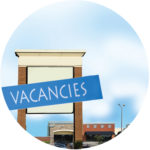 “You have such a nice selection for little girls, I’ll bring my daughter next time,” Talia said, smiling warmly as she headed toward the exit.

On second thought, considering the prices, there was no chance she’d be bringing Esti here. Six-year-olds can wear knockoffs from Ali Express, thank you very much.

“Looking forward!” The woman behind the counter waved.

The moment Talia walked out of Tziptoes, the bag of shoes dangling on her arm, she doubted everything. The past six months came rolling in like heavy fog, the last twenty minutes nearly flattening her. Just close your eyes and keep walking, it’ll all be okay.

Talia inhaled deeply. It was a lazy Monday morning with only a few shoppers in the small strip mall. A handyman stood on a ladder nearby, priming an empty storefront shingle for a fresh coat of paint. The sign was chipped and faded and read “_AILS.” Talia smiled.

I can’t believe I moved to a place where nail salons go out of business. Not to mention the name of the shoe store she’d just exited. Tziptoes? Must be some play on the owner’s name. She rolled her eyes.

A woman in an auburn sheitel twisted into a low ponytail sat outside the café next to the shoe store, leafing through a binder, a cup of coffee in front of her. Quaint, thought Talia. I can do quaint.

From the other side of the mall a woman approached, clutching a pile of pamphlets. Talia noticed the hem of her straight black skirt had come down on the right side — not in the trendy hi-lo way, but in the plain old pauper way.

“Can I have a minute of your time? I’m collecting money for—”

“I’m so sorry,” Talia said quickly, her cheeks growing warm as the woman’s eyes flicked toward the bag on her arm. “Not today.”

She turned away, abandoning her plan to head to the car. She escaped into the café, standing awkwardly at the entrance until a bubbly waitress walked over.

“Oh.” Talia glanced out the window. The tzedakah woman was still there, waiting to prey on other unsuspecting shoppers. “I guess I’ll have an iced coffee, please. To go.” She checked her watch; she still had another hour to kill before the interview.

“No problem.” The waitress smiled.

Talia sat down at an empty table. Through the large windows she could see an older man pull out his wallet and hand over some bills to the woman. She wondered what it would take to get to that point. How desperate she’d have to be to start asking for handouts.

Did Mrs. Fallen Hem also dream of tutus and ballet slippers as a little girl? Did she ever think — in her wildest dreams — that she’d be begging people for money instead?

The Vacancies writers fill in the holes behind the scenes

Those three women and their perfect stores, perfect lives, and a dance studio, it’s perfect, I can’t believe we didn’t think of it before!

The bell jangled and Laya straightened, then slumped back down when she saw who it was

I should get this place in shape if I want to attract a tenant, Talia thought grimly

To Naomi’s horror, Chani was walking toward them, apparently under the delusion that she was helping her little sister make a sale to these difficult customers

A mix of high decibel “Yayyys!” gave Talia her answer, and she was flooded by an unexpected sense of relief. I haven’t lost my touch after all