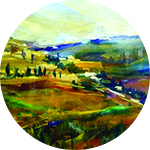 he birds are chirping, the flowers blooming. It’s Iyar and spring has arrived.

Iyar’s acronym, “Ani Hashem rof’echa — I’m Hashem, your healer” resounds strongly in this very strange spring of 2020, when nature is celebrating as the world is fighting a global pandemic.

The source for this acronym is in Sefer Shemos (15:26). The pasuk tell us, “If you will heed Hashem your G-d diligently, doing what is upright in His Eyes, listen to His commandments and keep all His laws, then I will not bring upon you any of the diseases I brought upon the Egyptians, for I am Hashem your healer.”

The Malbim sees these words as evidence of a direct link between living a life of Torah and mitzvos and good physical health. Hashem Yisbarach is dispensing the supreme prescription for a healthy life. After all, He is the Ultimate Healer Who cares only for our well-being.

The relationship between spiritual health and physical wellness is clearly defined for us in these pesukim. This relationship is further delineated in the choice of the wording of the Anshei Knesses Hagedolah in the eighth brachah of Shemoneh Esreh, “Refa’einu.”

Rav Shimon Schwab (in Rav Schwab on Prayer) points out that the opening words of this brachah are borrowed from Sefer Yirmiyahu (17:14), “Heal me and I will be healed, save me and I will be saved… because You are our praise.” Yirmiyahu is acknowledging that when we’re in need of a refuah, the only Being we need to turn to is Hashem.

Yet, earlier, Yirmiyahu concedes that he knows the source of his illness (17:9): “The heart is more twisted than anything and it is sick — who knows it?”

“The heart is the seat of our emotions,” explains Rav Schwab. “So much is hidden in it that it can be very ill, yet fool itself, deny it. This is the ‘refuas hanefesh’ that we ask for before ‘refuas haguf’ in the Yehi Ratzon supplication added to this brachah. Healing the soul is intrinsically tied to healing the body.”

We, Klal Yisrael, are one great body. Illness in our community is a palpable shaking of our collective heart. When struck with illness, rather than searching for reasons for the illness (exposure to radiation, air pollution, obesity), we should attribute it to something spiritual and ask ourselves, “What can I do better?” I often quote Rav Aharon Leib Steinman ztz”l, who said, “Everyone knows what they need to fix.”

Yet let us not take this the wrong way. We know the root cause may be spiritual, but it is not our task to blame, rather to look to improve. Those who were struck with coronavirus, may they all have a refuah sheleimah b’karov, have no idea why they got sick. “Nistarim darchei Hashem, the ways of Hashem are hidden.” What is always crystal clear is that we can do better, that we should always make a cheshbon hanefesh to tally where we’re holding in terms of our avodas Hashem.

A person I respect greatly shared with me the following story. A woman’s two children were struck with a terrible illness. As time went by, multiple friends of hers urged her to approach her rav and ask if there was some tikkun her children’s illness was demanding.

When the young mother mustered her courage and approached the rav, his response was strong and unequivocal. “The Chazon Ish clearly writes in his sefer Emunah U’bitachon that it is way beyond our realm of understanding to be able to point to the reason why Reuven receives A and Shimon receives B,” the rav said. “Do your friends think they know more than the Chazon Ish?” We are not to plumb the ways of Hashem. Our job is to serve Him with faith and endeavor to give Him nachas.

It was Iyov’s friends who suggested that his sins had caused his suffering. In the case of Iyov, it was Hashem, bi’chvodo uv’Atzmo Who corrected their erroneous assumptions.

Rav Shimon Schwab, in his powerful commentary on Iyov, explains the following about humanity’s quest to explain Hashem’s ways and how He metes out human suffering (ibid.): “If G-d’s judgment must be reconciled with your opinion, it must also be reconciled with the opinions of others because there is no universal agreement as to what is right and wrong, what should be liked or disliked….”

Returning to the rav’s answer, the message to us is clear: Let’s stop pointing fingers and trying to understand. Instead, let’s do our best to strengthen ourselves spiritually. Seeing an ill person should propel us to strive to better our service and connection to HaKadosh Baruch Hu.

“Ani Hashem rof’echa, I am Hashem your Healer.” But we often forget about Him. Rav Pincus (ibid.) recounts a conversation he once had with a pilot he knew. The pilot explained that the various parts of the plane must undergo a thorough and extensive inspection each time a plane lands and before it takes off. The danger of one small malfunction could be the catalyst to unfathomable tragedy.

In his uncanny way of finding a mussar haskel from everything he encountered, Rav Pincus posits: “Can we even compare the myriad workings of the human body to an airplane?” He suggests the possibility of some sort of computerized algorithm that would calculate all human body parts and their possibilities for malfunction. It would seem that such a study would render a human inviable!

It’s unfortunate that it’s only sickness or suffering that brings this reality to the fore. Focusing on the brachah of Asher Yatzar could bolster our cognizance of this multiple times a day. Halevai, Hashem should find our appreciation and connection to Him pleasing enough to warrant no more sickness.

Rav Pincus shares with us another uplifting insight: The brachah of Asher Yatzar concludes with the powerful words, “The Healer of all humanity Who does wondrous things!” while the pasuk in Shemos concludes, “I am Hashem, your healer.”

“Which is He? The Healer of all, or our personal physician?” asks Rav Pincus.

His answer is one that I’ve been repeating often since Hashem gave me the zechus to read it:

There is the natural power of healing that Hashem programmed into every single cell of our body. Scabs heal, nails replace themselves, and many aspects of our bodily functioning constantly rejuvenate. This is something Hashem has provided for all in His Infinite Goodness. Rofei kol basar.

Then there is the refuah that requires additional effort on our part. We take medications, see doctors, at times need surgeries, etc. For this sort of refuah, the pasuk asserts, we must dispel all illusions. Hashem is our primary and personal physician. His qualifications are endless, infinite, and 100 percent perfect. He is the top in all medical fields and has no interest in advancement or self-aggrandizement. He cares about you personally! Ani Hashem rof’echa.

Adds Rav Pincus, “He is full of surprises!”

How wonderful it would be if, b’ezras Hashem, we could, once again, be mekabel Torah as one strong and healthy nation. Let’s all do our utmost to be zocheh to see it happen soon!