Hearing them live was the best consolation of all 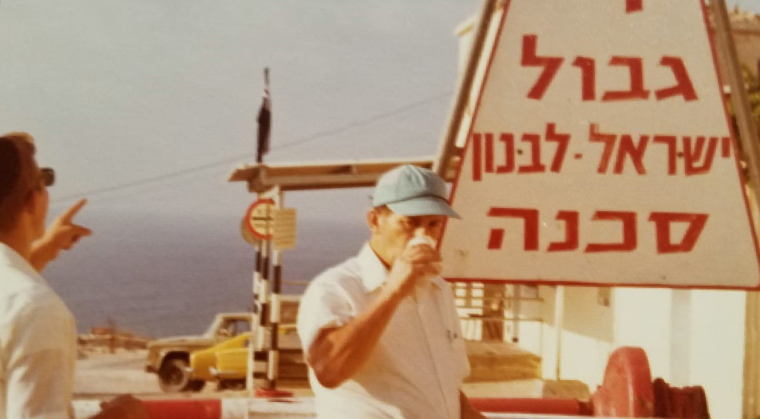 My father and brother Yosef Chaim at the Lebanese border on the day we “lost” our precious tape recorder. We could either be sad or sing through it

For those of you who don’t even remember what a cassette looks like, the reel-to-reel tape recorder of the 1950s and ’60s probably sounds like ancient history. But back then, the lucky homes that had a Wollensak portable reel-to-reel tape recorder could actually record music or speech with a hand-held microphone. Then, in 1964, Philips/Norelco invented the first cassette player, which opened the door to prerecorded music on tape. But the sound wasn’t as high-quality as the vinyl record, and it took a few more years until tapes took over the industry (the short-lived eight-track cartridge, and then the compact cassette).

The first Jewish music cassette didn’t come out until the mid-1970s, so before then, if you wanted to listen to your favorite songs on a tape recorder, you had to place your tape recorder next to the record player, press record, and be very quiet. Any noise you made would be heard on the cassette.

If you were a lucky cassette owner, you probably became an expert at manual winding — like when your child or little brother thought it was adorable to pull out the thin tape from the cassette and tangle it beyond recognition. Then your job was to use your finger, or find a pencil, and slowly, tediously, untangle and rewind the hours of the cassette so that it could be used again. We became talented cassette surgeons when that thin plastic accidentally got twisted inside the cassette — we took out our tiny eyeglass tools or mini-screwdrivers to very carefully open the plastic cover and untwist the tape. If the tape was still usable, it was considered time well-spent.

In 1972, my entire family went to Israel for three weeks at the end of the summer. Philips/Norelco had just come out with a portable cassette recorder, which sold for $80, not exorbitant, but a significant sum back then, and my father a”h went to the Lower East Side to buy one. He copied two records for us to enjoy on the trip — Yigal Calek’s London School of Jewish Song, and Sherwood Goffin’s Neshomo (with “The Little Bird” and other classics).

We all took turns with the tape recorder — on the airplane, in our hotel, at the pool. And when we went touring, we played it in the taxi, and we all sang along with the songs. One day, we took a trip up north to the Lebanese border, along with our trusty tape recorder. On the way back, we saw a backpacker on the road looking for a hitch. The taxi driver asked us if it was okay to give him a lift. My father, always generous of spirit, said, “Sure —why not?”

So we stopped, and a young European man in his twenties got into our car. He had a lot of stories to tell and his English was pretty good. We dropped him off a short time later. Soon after, my brother wanted to listen to some music. (There weren’t many fights about what to listen to, since there were only two options.) We looked for our cassette player, but it was gone. Our driver was devastated — he blamed himself for what was obviously a petty theft. My father tried to reassure him that it wasn’t his fault, but we were able to see that he was really affected by it.

Then something occurred to my father — he told the taxi driver that he had purchased travel insurance, and he would easily be able to make a claim and be reimbursed for the missing tape recorder. When the driver heard this, his mood perked up and he was all smiles. “This is perfect!” he exclaimed. “Now you’ll have one and he’ll have one!”

My father turned to us and said, with a grin, “Well, I guess that’s one way to look at it…”

The next night, we all attended our first Jewish concert ever. Eli Teitelbaum’s Camp Sdei Chemed was putting on a concert in Binyanei Hauma. And the opening act? Yigal Calek and the London School of Jewish Song. Now we could hear them live, which was the best consolation of all.