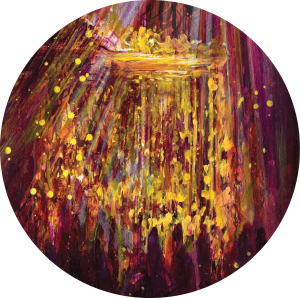 There are so many people to see when on visits to Eretz Yisrael — aunts, uncles, cousins, friends. Everyone comes with their own list. But there’s one name that appears on everyone’s list: Mamma Rochel.

The kever will be especially crowded this week, on her yahrtzeit of 11 Cheshvan, but day or night, you can always see throngs of people coming to daven and cry, knowing that their mother is always there to listen and to advocate for them in Heaven. How did Rochel Imeinu acquire this special role? What is the significance of her burial site? Why has it been a place for tefillah for thousands of years?

One of the most cryptic stories in Sefer Bereishis regards the dudaim flowers that Reuven brought as a gift to his mother Leah. Rochel Imeinu requested that Leah give her some of the flowers. An exchange was made: Rochel would receive the dudaim, and Leah would give birth to two more of the shevatim — becoming the mother to the majority of the tribes — and be buried alongside Yaakov Avinu in Me’aras Hamachpeilah. Rochel would lose these gifts, but gain the dudaim. Chazal comment that Rochel and Leah each lost and gained — and that the exchange was of equal value.

How can we understand this? What was the deeper significance of the flowers that made them outweigh these two incredible privileges?

Rabbi Eliyahu Kitov in Sefer Haparshiyos offers a profound explanation. The original sin of mankind was theft —the whole world belonged to Adam, with the exception of one tree, and from that one tree he partook. The succeeding generations followed in his ways; the generation of the flood was destroyed because of the sin of theft.

To rectify this, our Avos Avraham, Yitzchak, and Yaakov tried to build a world predicated on honesty, striving to avoid any disputes about ownership of wells, sheep, or the like. The litmus test that would determine their success? Seeing how their children would behave, if they had successfully absorbed the values their fathers transmitted.

As we know, the real measure of the extent to which our children have absorbed our chinuch is how they act when there’s no one watching them. Reuven was a young child of about four when he went out alone at the beginning of the harvest season. There were beautiful fruit trees and abundant fields, but none belonged to him. Reuven was careful not to take from any of these things, picking only ownerless wildflowers. At that moment, Reuven, the eldest of the tribes, cemented the tikkun of the Eitz Hadaas, paving the way for the success of the future chinuch of generations to come.

Rochel Imeinu saw the message behind these flowers. While she was not Reuven’s biological mother, she was very much involved in the chinuch of all the shevatim, and she wanted to be the one to share this nachas with Yaakov Avinu, to let him know that the next generation had imbibed their chinuch.

Rochel Imeinu was prepared to give up being the biological mother of the majority of the shevatim in exchange for the right to be the spiritual mother of Klal Yisrael. It was at this pivotal moment that the roles of the two mothers were divided; in a real sense, this is when “Mamma Rochel” was born.

It is in recognition of this role that Yaakov Avinu buried Rochel Imeinu by the road, and not in Chevron, so the Jews going into galus could daven at her kever. Indeed, as Rav Daniel Ochiyan in Ohr Daniel notes, it was her own son, Yosef, who inaugurated this as a place of tears and prayers. When the merchants were bringing Yosef to Egypt as a slave, he asked them to stop for a few minutes at his mother’s grave so he could daven, establishing Kever Rochel as a place of tears and prayers for generations to come.

Tefillos recited at Kever Rochel seem to have a life of their own. There are those who suggest that if one could only daven at the Kosel or Kever Rochel, one should choose Kever Rochel. What is the source of Kever Rochel’s power?

Rav Pinchas Friedman in Shvilei Pinchas notes that in part it is found in the diverse spiritual roles of the Imahos. Leah Imeinu is known as the alma d’itkasaya, the concealed world. Leah represents the part of us that is always connected to Hashem, the pintele Yid. She’s associated with the aspect of Yisrael, the higher name of Yaakov Avinu. Rochel Imeinu represents the alma d’itgalya, the revealed world — our connection with Hashem based on our deeds and behavior. She’s linked with the name Yaakov, the name connected with galus.

A fundamental aspect of our galus is the fact that Hashem is always with us even as we experience the pain — “imo anochi b’tzarah.” And not only is He with us, Hashem cries with us as we go through our tortured exile. The Navi tells us “b’mistarim tivkeh nafshi” — in the hiddenness, Hashem cries. Rav Friedman explains that Hashem has to kiveyachol go into hiding from Himself, from His knowledge that all is good, so that He can cry with each person in their personal and national pain.

It is at Kever Rochel, the place that epitomizes the revealed world — the world of reward and punishment, the world of pain and destruction — that this crying is most intense. Our tears mingle with those of Rochel Imeinu. They are joined by Yaakov Avinu’s tears as well; when Yaakov first met Rochel, he lifted his voice and wept. Rashi explains that he cried knowing he would not be buried with her.

Rav Yosef Salant in Be’er Yosef adds that Yaakov wanted his tears to join with her weeping, so she would not be crying by herself. Hence, the phrase used, “lifting up his voice” mirrors the “ramah” the heights, upon which Rochel Imeinu’s voice is heard. These tears are kiveyachol echoed by Hashem Himself — and this place, the burial place of the spiritual mother of all Klal Yisrael, becomes a powerful spot for tefillah.

Rav Moshe Wolfson, in Wellsprings of Faith, notes that Leah Imeinu is connected to the city of Chevron, the city that is not vulnerable to churban, continually connected with Hashem. Rochel Imeinu represents Yerushalayim, which is either in a state of pristine holiness or destruction — depending on our actions. (That’s why after davening by Kever Rochel, one should go up the road to Chevron, to the kever of Leah Imeinu, where we realize “oz v’chedvah bimkomo” — that it is our vision that is limited, and all that transpires is for the good.)

If you have any comments or questions on this column, please contact fundamentals@mishpacha.com.

On Asarah b’Teves we began the descent into galus, questioning if we’d been abandoned