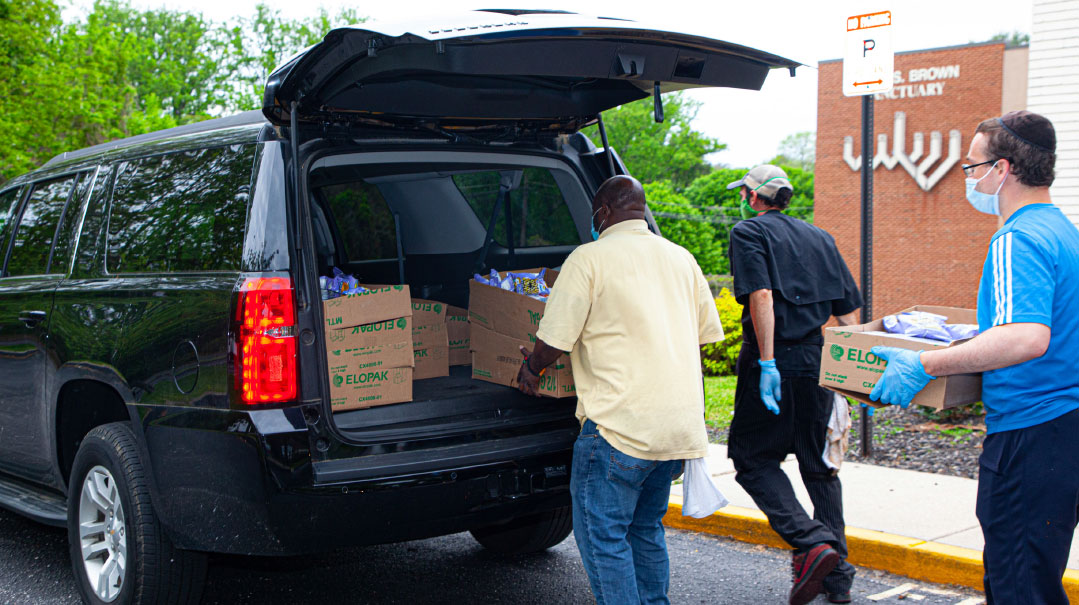 With pallets of thousands of Cornish hens to give away, a Baltimore caterer with huge ovens and an even bigger heart is making sure thousands of families have a Sunday supper that’s not Shabbos leftovers

What do Rock Cornish hens and golden doves have in common? For Fishel Gross of O’Fishel Kosher Caterers in Baltimore, Maryland, one bird inspired the other. Galvanized by an important life lesson he learned during Eli Stefansky’s popular “8 Minute Daf” shiur on Berachos 53 (Fishel is a sometime-sponsor), the big-hearted caterer decided to pay his personal golden dove forward by giving homemakers and others a break from the hectic toll of COVID-19.

The story in the Gemara is about Rabbah bar Bar Chana, the fourth-century Babylonian scholar who was once traveling with a caravan. He ate at a rest stop, but only remembered that he had not recited Birkas Hamazon after the convoy had already pulled out. Rabbah wanted to return to the location of his meal to recite the prayer, as is proscribed in halachah, but he thought to himself: If I tell them to go back because I forgot the brachah, they’ll tell me, “Don’t you believe Hashem can hear you everywhere?” He thought it would be better to tell them that he left behind a very valuable golden dove. He wasn’t kidding — the mitzvah of a proper Bircas Hamazon was a true golden dove for him. And so, convincing the group of the necessity of going back, they returned to the rest stop — and sure enough, as a reward for his scrupulous attitude toward mitzvos, as he was about to rejoin the caravan, Rabbah bar Bar Chana found an actual golden dove lying on the ground.

The golden dove, Fishel understood, is the way Hashem makes good things happen when we go out of our comfort zone — our “golden dove” can become a real golden dove. That said, Fishel looked around and got to work.

“Word gets out fast,” Fishel shares. “It was advertised late Sunday morning, and there was an incessant flow of traffic. We don’t ask a lot — wear a mask, come at your designated time, display the correct printed signage, and keep your window down or trunk popped.”

At one Sunday distribution that I visited, the program was dedicated in honor of those who’d gone out of their comfort zone to pick up meals for others during COVID-19. “These are people who might not be able to sponsor a whole event or pay for a product component, but they take 25 minutes out of their hectic schedules to do a chesed for someone else who lives alone.”

Shomrim was monitoring the long lines of vehicles snaking their way into the driveway. Traffic into the lot was backed up for blocks. Pickup priority was given to those who had not yet received free food from any of Baltimore’s COVID-19 food programs, including singles and shut-in couples.

Today’s homebound packages for singles and couples included a Cornish hen, kugel, cake, and other supper goodies. A later pickup was open to the entire Baltimore community, regardless of race or religion. The family box included three David Elliott Cornish hens, couscous, a vegetable, tahini sauce, and a Pariser’s Bakery chocolate strip.

“We were planning on purchasing 1,500 pounds of chicken breasts for chicken lo mein,” Fishel says, “but instead, I ended up with Cornish hens. I was speaking to Dovid Yehuda Fink of David Elliott Poultry Farm — they were my supplier all the way back when I was the unofficial cook for some bochurim 45 years ago in the Scranton yeshivah. There was a shortage of that product, so instead they dropped off 4,000 complimentary hens.” That week, over 1,300 families benefitted.

The luscious aroma of hundreds of trays of baked Cornish hens lures me into O’Fishel’s kitchen, where I find Carol, the head chef since 2010, cooking from seven this morning. She’s navigating the 11 ovens that each fit four trays of 20 hens, roasting 880 birds at a time. The last five pans were about to come out of the oven, when I noticed that Carol, with the help of Chef Dan, of Chef Dan’s Café at the J, was preparing large vats of spaghetti and meatballs — just in case they ran out of hens.

“It’s already close to six o’clock, and the distribution ends at six — what are you going to do with all that spaghetti and meatballs if no one else comes?” I ask.

“Our boss is very, very generous — don’t worry, he’ll find people or organizations to give it to,” they assure me. And, says Dan, who has helped O’Fishel with other COVID-19 volunteer initiatives, he’s grateful for the opportunity to be part of it. “Fishel does it from the goodness of his heart, but he allows me to share my heart, too.”

There were about 100 hens left after the distribution, and the extra meals were distributed to other neighborhoods, including Ner Israel’s Yeshiva Lane and to the Chabad community in Columbia, Maryland. And the spaghetti and meatballs?

The morning after that distribution, Fishel was informed that there were two more complimentary pallets of Cornish hens for him — that’s another 4,000 hens. “We weren’t planning on doing another distribution so soon — our staff was exhausted — but I also didn’t want to turn them down for our community, who could really use them. The other question was how to get them.”

It turns out that a new David Elliott customer — a golden dove, according to Mr. Fink — who lives close by was going to Scranton and offered to bring back the chickens, and to deliver Fishel’s gift to the community: spaghetti and meatballs.

Rav Chaim Bressler, one of the roshei yeshivah in Scranton’s Bais Moshe, said the community was thrilled with the gift. “Fishel is a very tall guy, but his heart is even bigger than he is — it always was,” says Rav Bressler. “As a bochur, he would cook for some bochurim on the side, although we didn’t allow it because of a safety hazard. I found out about it and took away his electric griddle. Years later, I kidded him about it, saying, ‘Fishel, I tried to put you out of business, and it didn’t work!’ ”

This wasn’t the first time that O’Fishel Caterers stepped up for the Baltimore community. In August 2011, in Hurricane Irene’s aftermath, it extended a similar offer, and despite weather-related communication challenges, the word got out. Anyone whose power had not been restored was invited to eat in the Moses Montefiore catering hall, gratis, in partnership with the shul. Hundreds of community members took Fishel up on his offer for a good hot meal.

Almost a year later, on Monday, July 2, 2012, a long line of hot, tired, hungry people benefitted from their first real meal since their Shabbos seudah, after a tornado-like derecho caught more than three million homes in the mid-Atlantic states by surprise, that Shabbos night. Thousands of homes in Baltimore had lost power, and it was already going on day four without electricity, with no end in sight. This was Fishel’s personal way of paying forward the siyata d’Shmaya that enabled him to cater two back-to-back weddings at his commissary, rather than at their original venues, since his hall was not affected by the power outages.

All of these initiatives are part of a popular program that O’Fishel Caterers founded almost 20 years ago — “Mitzvah Motivators” — in order to create enthusiasm for mitzvah observance in Baltimore and beyond, such as the popular “Make-Your-Brachos-Out-Loud” and “Summer Masmidim” programs. And while the food-distribution programs didn’t cost the recipients anything, there was one catch, as Fishel mentioned in his ad: “Please make a brachah slowly and meaningfully. If someone else can answer Amen, even better! The brachos made should be in the merit of the complete recovery of all cholei Yisrael around the world.” And, “When you have the opportunity to help someone else in any way (shopping, calling, praying, etc.), please pay the chesed forward!”

“Fishel told me, ‘Mark, Boruch Hashem we both had good businesses pre-COVID-19, and we’ll hopefully get some favorable-term government loans. Let’s pay it forward.’ He thought it was important to give back to the community that supported him in the past. I felt the same way — it really hit home. I wanted to be part of it,” says Mark Schwartzman.”

He and his wife, Karen, donated the desserts — 1,200 fresh-packaged cakes — for one of the meal giveaways. “Fishel really got through to me that it pays to give back to others, and it helps support local vendors as well.”

For the turkey, schnitzel, and deli dinner distribution, Pariser’s Bakery donated 1,200 rye bread loaves, and Birdsboro Kosher Farms donated thousands of packs of deli. Mark mentions the ripple effect their volunteerism has caused — people have called him to volunteer their time to help direct traffic for this program. One local accounting firm sponsored the costs for an entire event.

“I was disheartened to see a popular donut shop in Rhode Island rescinding their store discount that was available to the police and military, and the patrons who lined up in solidarity with negativity,” notes Fishel, who wasn’t shy about announcing these sentiments at the event. “It’s a slap in the face to the morale of those we need to support even more at this critical time. I encourage any business or individual to treat these men and women of our community with respect. Buy them a cup of coffee or an ice cream or give them a smile, and, at least, thank them for their service.”

“I think this is wonderful,” said a Baltimore police officer who attended the event. “We know the support from the community is there, but sometimes it gets overshadowed by current events. There are good police officers out there and there, are good people, and we want to serve and protect them and keep everyone safe…. It was worth the trip over here, especially to show my daughter that there are people who stand together and support the police and the community during these rough days.”

Some police officers, though — while enjoying the hot dog and snowball event at which boxed family dinners, hand sanitizer, and other goodies were distributed — were more wary about voicing their thoughts.

For Fishel though, it’s about doing what’s right — and the brachos are sure to follow. Even his non-Jewish employee, Mr. William Towah, has his personal golden dove story. “I was let go from my job, and even though I was struggling, I gave my entire severance pay to my church in Africa for musical equipment, to bring people closer to G-d. I know I was doing a good deed. That same day, Fishel called me and said, ‘I want you to come work for me.’ ” 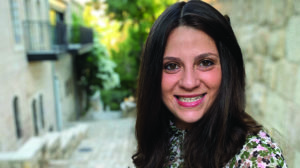 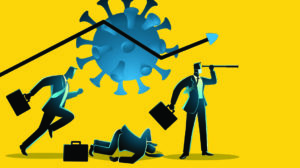 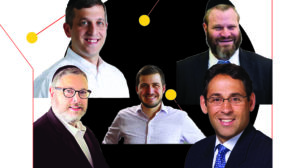 | Business Casual |
What Productivity Tips Help You Make The Most Of Your Time?
Musia Slavin 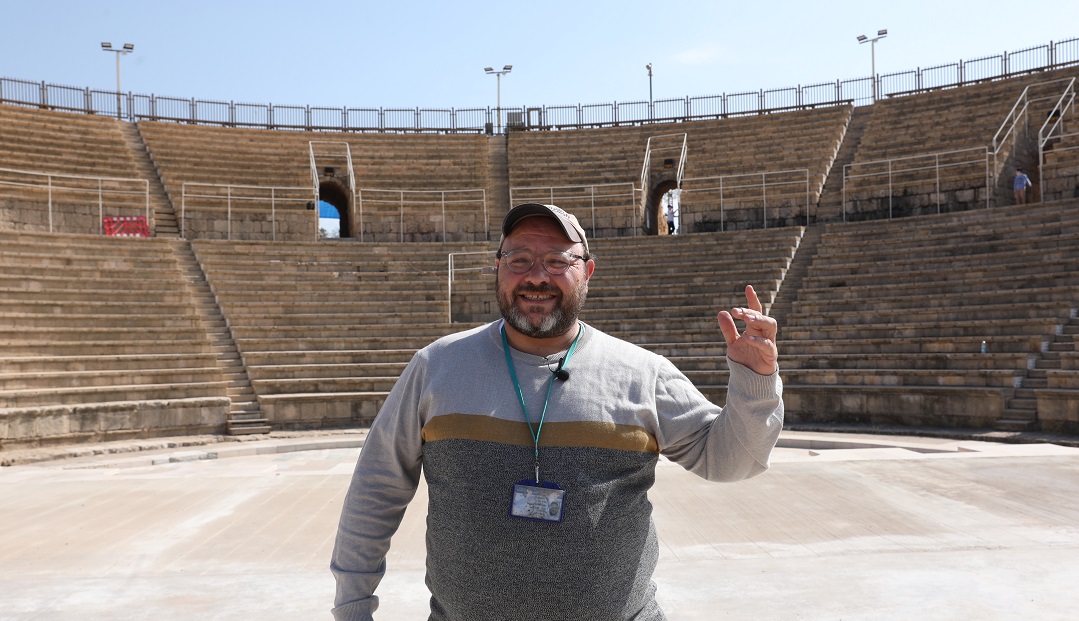 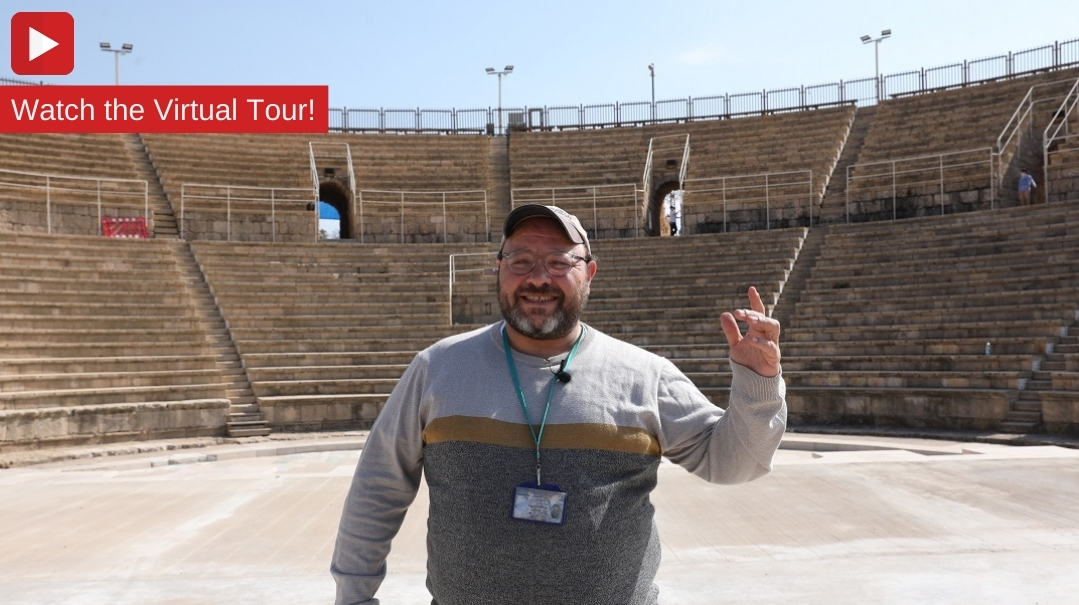 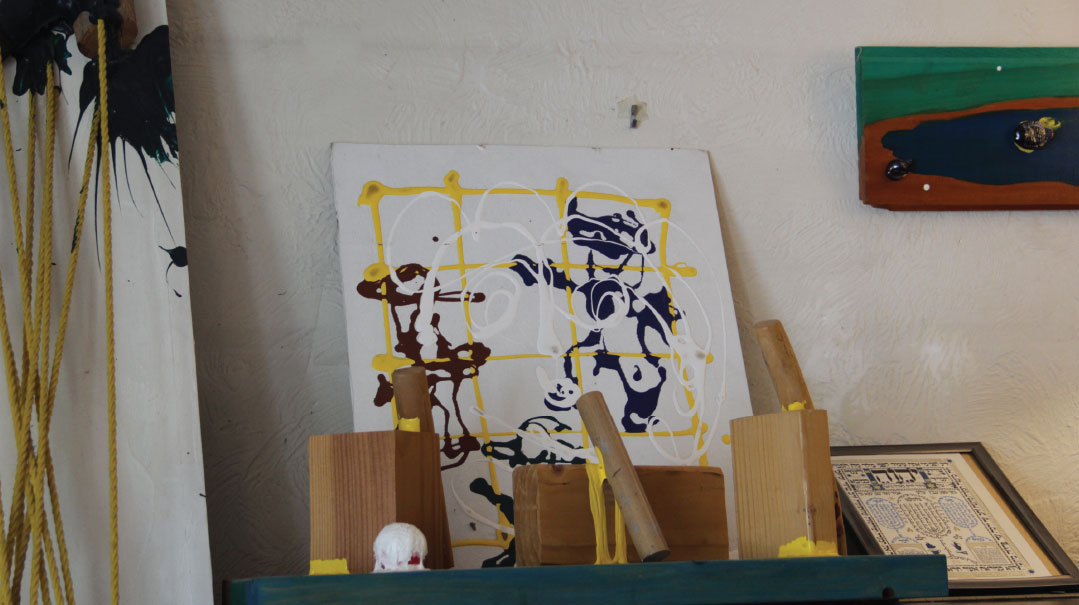 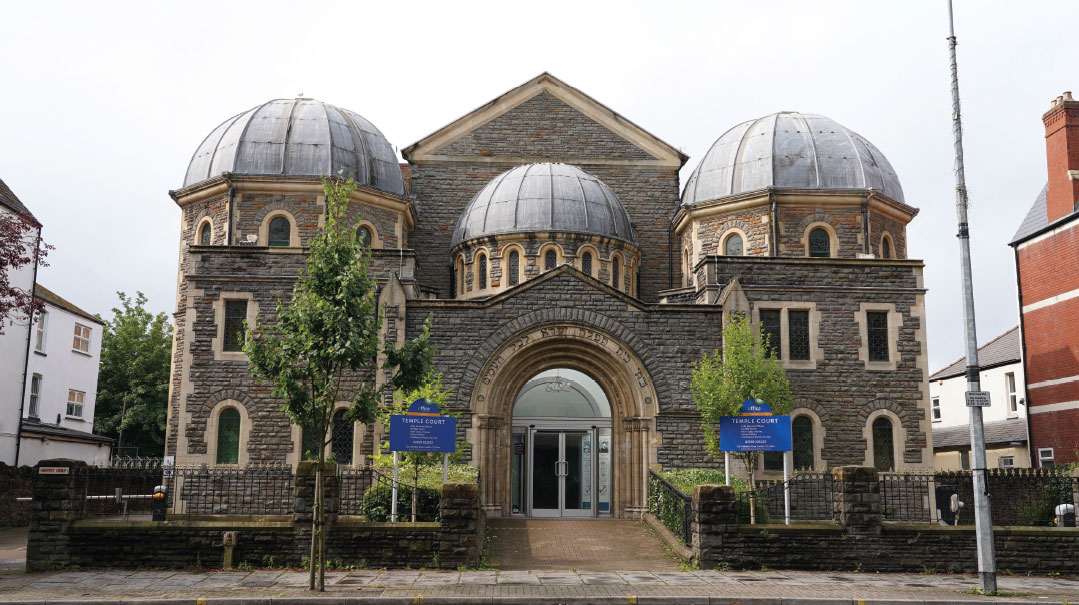 Riki Goldstein
Off the Map 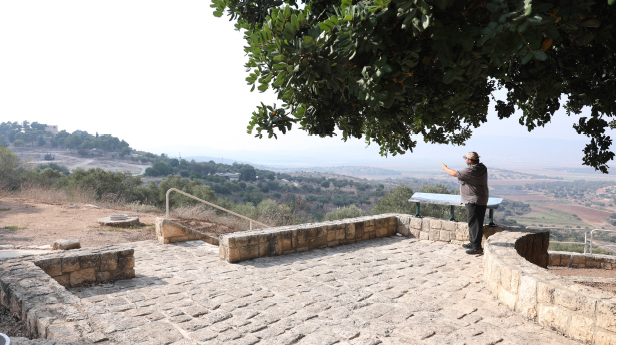 Jews were banned from Jerusalem for centuries after the Beis Hamikdash was destroyed, leaving the far-away Galil the new frontier. And Tzippori became the place to reframe 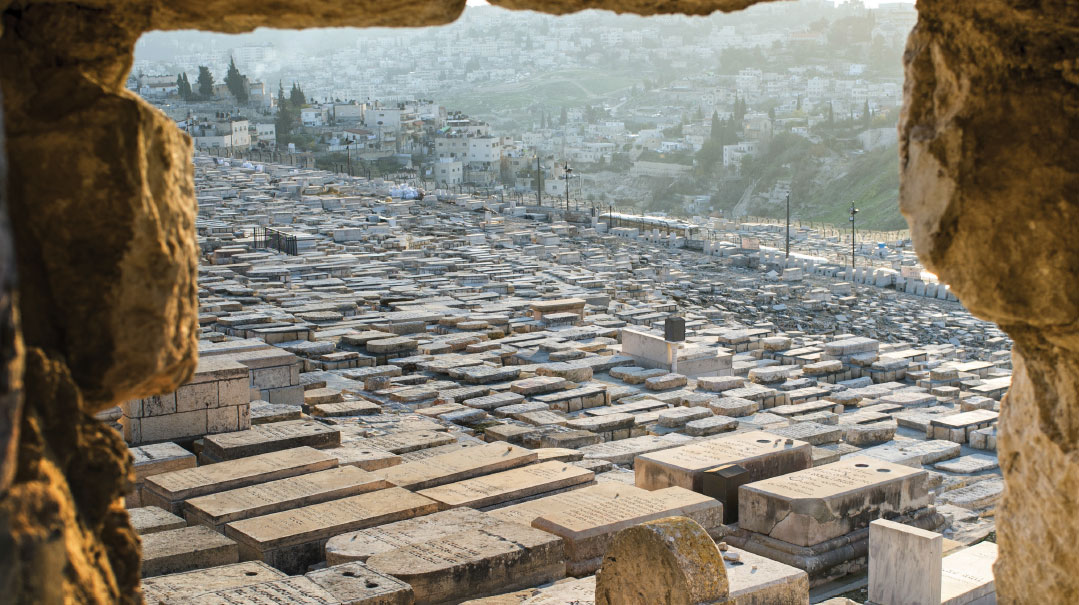 Chananel Shapiro
Secrets to the Grave

Har Hazeisim's forgotten graves have been given new life