“The Torah is perfect. Its adherents are not” 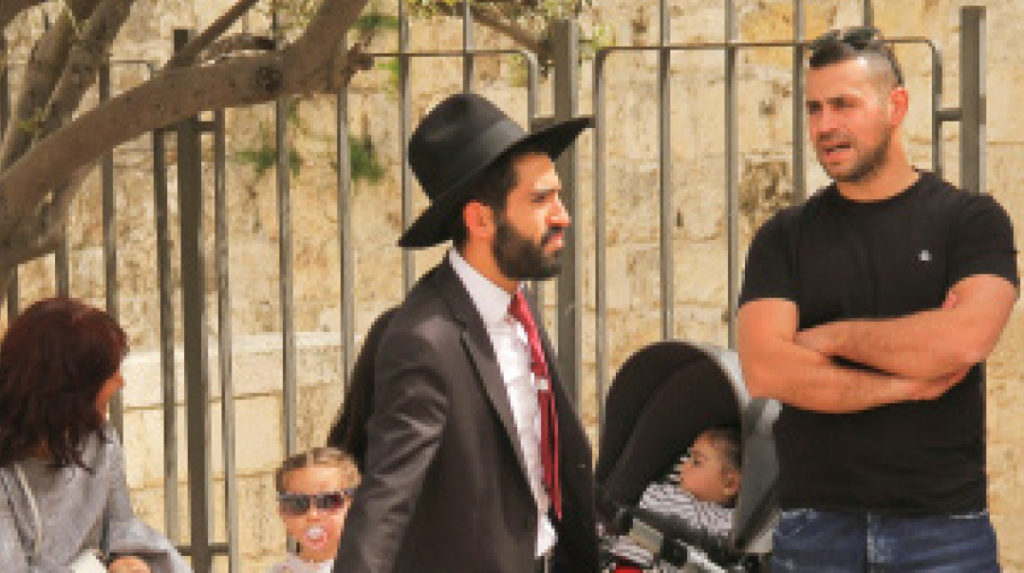 On his short videocast for parshas Balak, Rabbi Yaacov Haber told an inspiring story about Rav Shlomo Zalman Auerbach, ztz”l. One day a young avreich who had a chavrusa with Rav Shlomo Zalman told him that he would not be able to come the next day, as he had to accompany his wife to look at an apartment they were considering purchasing. Rav Shlomo Zalman shocked him by asking whether he could come along.

The following day, the young avreich asked Rav Shlomo Zalman why he had accompanied him and his wife to the apartment. The latter replied, “I wanted to inject some ayin tovah — a positive eye — into the apartment where you will build your lives together.”

That story clarified a lot for me. First, my role as a grandfather. My job is to notice every wondrous thing that any grandchild does or any positive trait that they display, and inform his or her parents of my findings.

It also helped me understand another benefit of the programs like Kesher Yehudi and Be A Mensch, which bring young avreichim and their families together with secular Jews. One of my sons has volunteered in the Kesher Yehudi mechinah program for several years. He told me this past Shabbos that he has been very impressed with the almost uniformly high quality of the Jewish young people in the program, a high percentage of whom will go on to serve as officers in the Israel Defense Forces. His fellow religious volunteers have been similarly impressed.

If Rav Shlomo Zalman could infuse an apartment with positive energy by viewing it with a good eye, does it not follow that by noting the positive qualities, from a Torah point of view, of our fellow Jews that we can uplift them and bring them closer to Torah? Perhaps that is what the Tolna Rebbe meant when he said in a derashah that the corrective for the sinas chinam for which the Beis Hamikdash was destroyed is ahavas chinam. He defined the latter as paying attention to all the ways in which every Jew is “filled with mitzvos like the seeds of a pomegranate.”

NOW, LET’S CONSIDER the other side of the coin: How do we wish to be seen by the secular Jews whom we meet? I’m thinking primarily in terms of bringing other Jews closer to Torah, which I assume is a goal of every believing Jew. As representatives of Torah Jewry, presumably we wish to be well thought of. But what exactly does that mean?

One thing it emphatically does not mean is that secular Jews should think: Wow, there is no difference between Torah Jews and us, except that they wear a kippah (or sheitel) and we don’t. That mistake, as obvious as it may seem, is far more common than one might think.

The observant Jews in Israel who have been most integrated into the economy and army have, ironically, had the least impact on kiruv. That is in part because they share the same national culture — e.g., music, TV shows, etc. — as the secular world. That fact has made it difficult for their coworkers and fellow soldiers to see them as significantly different from them, except for the aforementioned kippah. (This, of course, is an overgeneralization about a diverse community.)

A store of sports trivia or knowledge of popular culture might be a conversation starter for a campus kiruv rabbi. But nobody ever decided to look more deeply into Judaism because they met a rabbi who would have been a champion on Jeopardy.

When I first entered Ohr Somayach 40 years ago, I wrote many letters to old friends in which I assured them that I was still the same person they had always known. At some point, however, it dawned on me that if that were true, what was the point of the intense Torah study in which I was engaged?

(Decades later, when I started returning to the States frequently to research biographies or for speaking engagements, I overcompensated and grew peyos precisely to make the point that I was not the same person, even if I could still handle myself in political argument. Until one day, the late Rabbi Meir Zlotowitz said to me, “Jonathan, you are wearing a yarmulke, you have tzitzis hanging out, you have a beard, you dress in black and white — how many reminders do you need to make that point?”)

Rabbi Moshe Sherer exemplified for me the ability to interact with an enormous cross-section of people without ever lowering himself or acting out of character for an Orthodox rabbi. He never tried to impress or curry favor by being “one of the boys,” and that was one of the keys to his phenomenal influence. By treating politicians with whom he met as high-minded and refined public servants, he raised their self-image and in the process their opinion of him and his constituents.

In our contacts with non-observant Jews, it is crucial that they feel our joy and satisfaction with our lives. That is one reason that the volunteers in Kesher Yehudi, for instance, are so effective. Those who are willing to commit large amounts of their time to meeting with nonobservant fellow Jews are likely to be those who are most enthusiastic about their lives and eager to share something of that joy.

A Shabbos spent with a religious chavrusa and his or her family is a crucial component of the Kesher Yehudi mechinah program precisely because secular Jews have such a hard time believing that not only can one live 25 hours without Internet or automobiles but one can look forward to the day all week. Often the children in the family are the best salespeople for this point, and relish the opportunity to share their love of Shabbos with non-frum Jews. Those filled with excitement about their lives have nothing to fear from contact with nonobservant Jews, as many gedolim have said, because — to borrow a metaphor from the laws of kashrus — the one who is giving off his joy and satisfaction does not absorb from the outside.

TO CONVEY THE IMPRESSION that Torah Jews are the same as everyone else in different clothes is a terrible failure. But so is it dangerous to paint the Torah world as if it were inhabited by ethereal beings not subject to the same drives and temptations as others. In order for our way of life to become a real possibility for our fellow Jews, they must understand that the Torah was not given to angels. Ironically, the realization that one of my early mentors had a bad temper made it easier for me to become observant, for it signaled that I need not achieve the perfection of Rav Aharon Feldman (another early guide) to join the community. I just had to be willing to work on my faults.

The difference between a Torah Jew and a nonobservant one — albeit an enormous one — lies not in the human material, but in power of the Torah to help us master unruly desires and to live more in accord with the dictates of our Divine intelligence.

It is, however, a mistake to oversell the observant community as a perfect one, in which lashon hara is never spoken, all children happily follow in the paths their parents set for them, and all shul-goers are paragons of wisdom. Such oversell has created many disappointed baalei teshuvah.

It only takes one black swan to refute the proposition that all swans are white. But that refutation undermines every other claim that one has made. (Anti-religious crusaders make the opposite mistake: By demonizing the Torah community, they create a situation in which it is sufficient for young people to come to know one or two Torah Jews who don’t fit the stereotype for them to begin to question everything negative they have ever been taught about Torah and Torah Jews.)

The reality of a Torah life is beautiful enough that we need not and should not make exaggerated claims. As Rabbi Berel Wein always says, “The Torah is perfect. Its adherents are not.”

Originally featured in Mishpacha, Issue 770. Yonoson Rosenblum may be contacted directly at rosenblum@mishpacha.com

Yonoson Rosenblum
Those Who Chose to Stay

Two seminaries that remained opened throughout the crisis: Meorot Yerushalayim and Darchei Binah

Yonoson Rosenblum
Let’s Not Beat Ourselves Up

On the level of derech hateva, the self-doubts and recriminations are excessive

Yonoson Rosenblum
It’s Not About Life vs. Money

If we ask the right questions, we might get a lot closer much sooner

Yonoson Rosenblum
That Was a Leader

Over a period of 30 years, the Novominsker Rebbe drew me close to him