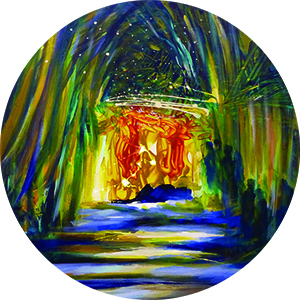 On our fifth date, I posed the question.

Shavuos was a week away and yeshivah bochurim across the world were stockpiling seforim, anticipating an epic night of learning. I, on the other hand, was feeling very conflicted, and figured I’d tap the hashkafic wellsprings of my unwitting date.

“What does Shavuos have to do with me?” I asked him. “I don’t have a chiyuv of limud haTorah, how do I relate to a Yom Tov that celebrates Torah learning?”

Puzzled, he said, “You’re making a mistake. Shavuos is not a celebration of limud haTorah, it’s a day of kabbalas haTorah, when we accept upon ourselves the Torah, and this applies equally to men and women.”

His explanation made a lot of sense to me. So much so, that the following Shavuos we celebrated kabbalas haTorah together as a married couple.

Shavuos can be a perplexing time for women. The men are pulling all-nighters in the beis medrash and we’re left to guard the cheesecake and ponder: What does this Yom Tov mean for me? What is kabbalas haTorah?

Over three and a half thousand years ago we stood at the foot of Har Sinai. With the words “naaseh v’nishma,” we replotted our nation’s trajectory, committing to an existence whose axis and arc were yet unknown.

The Beis HaLevi (Shemos 19) quotes the Rambam, who questions the viability of our naaseh v’nishma. He explains that a person cannot be halachically bound to a commitment whose parameters are undefined. How then, did our declaration of “naaseh n’nishma” obligate us to keep the Torah? The scope and grasp it would have on our lives was unknown and immeasurable, precisely the points that invalidate a commitment! Especially when we consider that Torah shebe’al peh, whose breadth and depth are ever expanding, was included in this proposition.

Our premise is mistaken, explains the Beis HaLevi. When we accepted the Torah, we were not agreeing to an indeterminate, limitless set of laws. Rather, we designated ourselves eternal servants to Hashem, with the clear stipulation that our body, heart, and mind are His. These distinct parameters indicate a halachically sustainable agreement. They also indicate a state of servitude that stretches on for eternity.

Frankly speaking, the implications of “naaseh v’nishma” are terrifying. When we accepted the Torah we forfeited our autonomy, transferring from “avadim l’Pharaoh” to “avadim la’Hashem.” Kabbalas haTorah is an awesome act of utter submission, and we may sometimes wonder how we can live up to these expectations.

The famous mashgiach, Rav Shlomo Wolbe, once discussed the recitation of Shema with his talmid.

“When you say Krias Shema, do you ever have the urge to simply get up and run away?” he asked.

“No, of course not”, replied the talmid matter-of-factly.

“Then you’ve never truly recited Krias Shema,” countered Rav Wolbe. “If you understood the implications of kabbalas ol malchus Shamayim, you’d question your ability to shoulder such a tremendous burden.”

Notions of servitude, submission, and eternal avdus can misconstrue kabbalas haTorah as a weighty millstone consuming our vital energy. However when we consider the symbiosis of the Torah, the world, and ourselves, kabbalas haTorah presents very differently.

What came first, Torah or the world? Perhaps the Torah was crafted to be a moderating force on an unruly domain? Or perhaps the magnificent complexity of our planet and its people was created as a response to the dictates of the Torah?

Anyone who has done construction, whether a small job or an entirely new house, knows that a precise architectural blueprint that details rooms, hallways, electrical wiring, even furniture placement, can make the difference between a smooth renovation and a structural nightmare.

The Midrash Rabbah (Bereishis 1:1) depicts Hashem’s construction of the world in similar terms: “The Torah says: I was the crafting tool of Hashem. When a king of flesh and blood builds a palace, he does not rely on his own wisdom, rather on the expertise of an artisan. The artisan does not build of his own accord, he defers to his booklets and papers to guide him in building rooms…. So, too, Hashem beheld the Torah and created the world.”

The Zohar teaches a parallel idea: “Istakel b’Oraisa u’vara alma,” Hashem looked into the Torah and thus created the world.

Torah is not a guidebook Hashem authored after Creation, a thoughtful aid to better navigate His world. It’s the screenplay to Creation, the causative for the world as we know it.

Rav Chaim Friedlander (Sifsei Chaim) explains that Istakel b’Oraisa u’vara alma is not a question of semantics; it imbues each aspect of Creation with monumental spiritual purpose.

“Hashem examined the mitzvos of the Torah, and considered the devices and instruments necessary for their fulfillment. According to this He created the world… a world primed for observing the Torah’s mitzvos.” (ibid.)

We’re so accustomed to the world’s format that we never pause to consider its rationale. Why were we created with eyes, a nose, and a mouth? Why must we contend with a spectrum of emotions such as jealousy, worry, and hate?

Torah is the blueprint, and its content dictates the world’s structure. The mitzvah of “lo sasuru acharei levavchem v’acharei eineichem,” is not a response to man’s willful tendencies. Rather, Hashem created us with eyes and a heart so we’d be equipped to fulfill this mitzvah.

Kabbalas haTorah is the antithesis of burdensome servitude. If we do, at times, find ourselves overwhelmed with our spiritual responsibilities, we need only remember that we were, quite literally, created to fulfill them.

In Maseches Pesachim (78b) the Gemara asks: Should Shavuos be devoted solely “la’Hashem,” to spiritual concerns such as Torah and tefillah, or should we divide our celebration of Matan Torah between pursuits that appeal to the spirit and those that indulge our bodies, such as a lavish meal?

Rabi Elazar confirms that our Shavuos celebration must include “lachem,” physical indulgence.

The Gemara continues: “What is the reason [for feasting on Shavuos]? Because it is the day on which the Torah was given.”

The day on which the Torah was given? This rationale should justify a day devoted to the soul; engaging in tefillah, intense Torah study, perhaps even fasting! It seems counterintuitive to pair such holiness with our unsophisticated cravings.

Rashi explains the reason for our festive Shavuos meals: “…lehar’os shenoach u’mekubal yom zeh l’Yisrael shenasnah Torah bo — to demonstrate that this day, when the Torah was given, is pleasant and mekubal (accepted) upon Yisrael.”

It’s not coincidental that the word mekubal is reminiscent of kabbalas haTorah, they are conjugations of the same root.

The Torah dictated the contours of our physical world and bears witness to the suitability of one for the other. When we celebrate Shavuos with food to satisfy our physical bodies, we reiterate the Torah’s symbiosis of our spiritual and physical entities. And in doing so, we reveal that kabbalas haTorah is the acceptance of Hashem’s Will, and simultaneously a celebration for our corporeal selves, to which Torah is mekubal, utterly suited.

This Shavuos, let us reaffirm that the Torah is mekubeles alai, the Torah is singularly suited for my life. Can there be a better celebration of kabbalas haTorah?