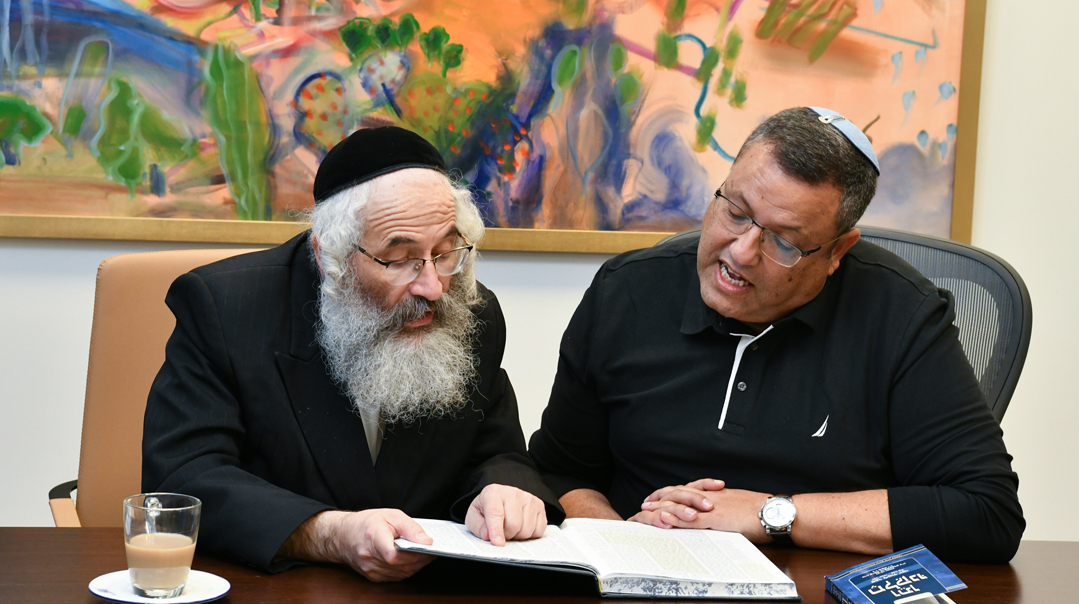 The location: City Hall of Jerusalem

earning Gemara doesn’t normally involve negotiating airport-style security, with armed guards checking ID before waving you through. But then most people aren’t Rabbi Moshe Kovalski, heading for a chavrusa on the sixth floor of Jerusalem City Hall with Mayor Moshe Lion.

It’s a quiet Friday morning in Kikar Safra. The workweek is winding to a close and the cleaning crews are busy in the airy office suite. A meeting of municipal officials ends and the mayor lights up when he sees his chavrusa and mentor of many years.

“Hitga’agati lecha — I missed you,” the kippah-wearing Lion says, beaming.

Sitting together at the broad desk that once hosted Prime Minister Ehud Olmert, Moshe Lion and Rabbi Kovalski make an unusual pair. The big, genial mayor, whose prominent CPA firm made him a wealthy man who could afford to pursue a career in politics, has now been at the helm of Yerushalayim for a year. Next to him, the rav of the Sochatchov shtibel in Bnei Brak doesn’t look like an obvious choice of learning partner.

But as they start to learn Gemara, it becomes obvious that there’s a chemistry here.

“Why was Rabi Yochanan not scared of ayin hara?” Rabbi Kovalski asks, starting in the middle of Berachos 20a.

Lion enthusiastically weighs in. “When you are good to others, you are protected,” he says.

“You’re right,” Rabbi Kovalski says. “And let me add something else…”

Half an amud, a Chazon Ish, Sheim MiShmuel and sundry insights into modern life later, it’s clear what the secret of this chavrusa is: Rabbi Kovalski’s warmth, plus his ability to make a piece of Gemara relevant to the life of his audience.

“When I learn with Rav Kovalski,” Lion says, “it’s pure pleasure. Gemara opens your mind, and you wonder how they had such wisdom 2,000 years ago that applies today.

“I’ll tell you something else,” he adds. “Rav Kovalski makes learning Torah accessible, even for people with no yeshivah background. Without him I would never have started learning. More than ten years ago, Rav Kovalski’s son joined my accounting firm, and then the rav started to come to give a shiur twice a week. We would stop all business and then everyone — religious, secular — would come to learn. That’s when I started to learn Gemara.”

Being a “rabbi to the stars” is a well-known phenomenon in Israel, but it’s not something you would have expected looking at the unassuming figure that is Rabbi Kovalski. But according to Moshe Lion, his chavrusa is just that: “He mainstreamed Torah learning for all the lawyers and the stars.”

Rabbi Kovalski’s Meoros Hadaf Hayomi program, a network of shiurim that spans shuls and boardrooms across the country, began as a daily chavrusa with a lone Bnei Brak businessman. It’s now expanded to a daily learning session for 10,000 people, based on a learning series called “V’tein Chelkeinu” — and yes, it counts many of Israel’s leading performers, some of them secular, among its ranks.

But the appreciation cuts both ways. “When a man like Reb Moshe closes his business, or takes time out from being the mayor of Yerushalayim to learn,” says Rabbi Kovalski, “that sends a message. It shows that Gemara is a motag — a brand. If he has time, then learning becomes fashionable.”

Asked for a memorable moment in their chavrusa sessions, Rabbi Kovalski turns to Lion. “Moshe, don’t you remember when you made the siyum ten years ago? That’s when I first saw your penimiyut. You finished Masechet Berachot for the first time, and then you cried.”

Lion laughs as he recalls his children’s reactions: “Yes, they’re talmidei chachamim and they said, ‘Abba, forget all this accounting business — you’ve finally achieved something!’”

Although the pressures of office have recently reduced their learning sessions, they’re determined to make it a weekly event again. But between running a daf yomi empire and running the world’s holiest city, how do two very busy people make time to sit and learn? It’s a question that weighs on both of their minds.

“When I manage to take a few minutes, I ask that no one disturbs and then I can really disconnect — there’s no better feeling than when you manage to do that,” says Moshe Lion.

Rabbi Kovalski adds a modern twist. “It’s like getting a few minutes to speak to President Trump,” he says. “During that short time, you totally disconnect and focus on getting what you need. Now Hashem says your Torah learning is keeping the world going.”

“But how do you that every day, summon up the focus and concentration when it’s not just a one-off meeting?” Lion asks.

True to his roots, his chavrusa answers with a Sochatchov explanation. “When a Jew who is extremely busy decides to stop and take time to learn or daven,” Rabbi Kovalski says — and there’s no one who understands that more than the mayor sitting beside him — “the malachim created by that decision are what give him the strength to carry it out.”