In the frum community, lives continue to be lost. Either we mean it about one Jewish life being worth all the world, or not 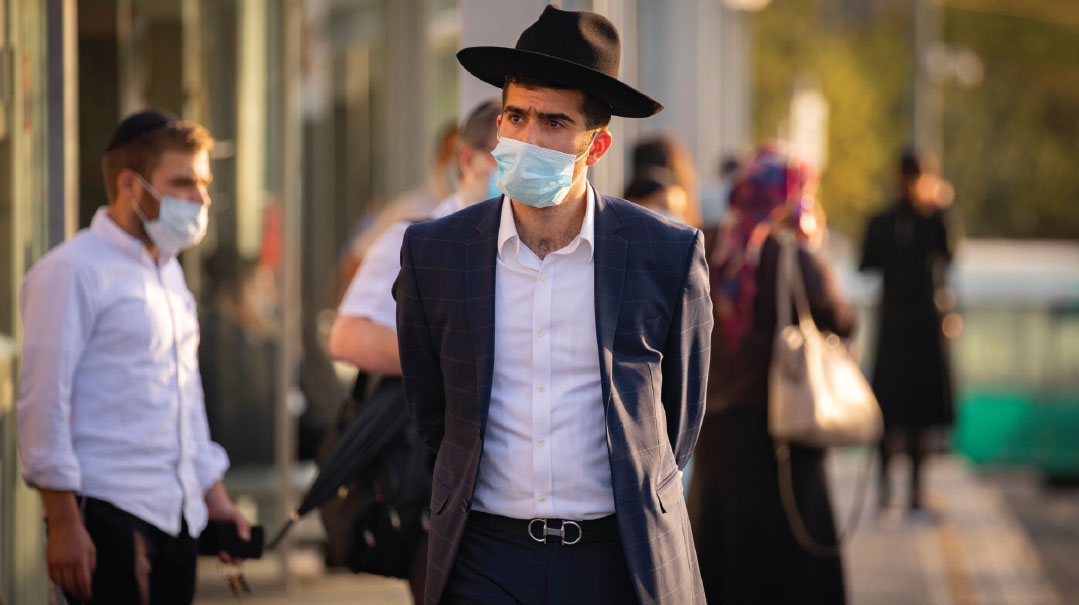 New COVID cases and hospitalizations are exploding across the United States as the pandemic has reached a crescendo, accelerating across dozens of states in both sparsely populated rural areas and densely populated urban centers. “We are entering the most difficult phase of the pandemic right now,” former FDA commissioner Scott Gottlieb said last week. “We are much better prepared to deal with it, but it is going to be a hard stretch ahead.”

New cases have skyrocketed to record levels of up to 600,000 per week, and hospitalizations are up 50% over just a month ago. Testing levels are high, averaging more than one million per day, but the percentage of tests coming back positive has also risen, to about 5.3% as of this writing. That means we may be catching more cases — but there are also more cases to catch.

There is, baruch Hashem, much good news too. Most importantly, that treatment for the virus continues to improve at a galloping clip, due to advancements in treatments and hospitals’ ability to better deal with patients. According to new research, hospitalized COVID patients have approximately a 7.6% chance of dying, a vast improvement over several months ago, albeit still many times higher than the chance of death from the flu and other infections (and survivors may find that the virus has caused serious long-term damage to critical organs).

As cases spiral, hospitals may again reach a breaking point of overload, as is already happening in many states. So long as the infection rate rages out-of-control, the actual numbers of people dying will rise despite the declining death rate. And now as we’re heading into the winter, the risk is expected to rise due to people huddling indoors in closed spaces.

In the frum community, lives continue to be lost. Either we mean it when we talk about one Jewish life being worth all the world, or not. Two weeks ago, a longtime friend left a grieving family behind, and another long-ago friend lost both parents in consecutive weeks.

I close my eyes and imagine what it would look like were we to live up to who we are supposed to be: a community possessing a Torah intended to make us the most serious, responsible, life-treasuring people in existence. I conjure in my mind the scene of frum Jews, hundreds of thousands of us strong, finally beginning to do what credible medical experts say saves countless lives, thereby making it the necessary hishtadlus required of us.

This is completely unrelated to shutting schools and shuls or justifiably working to overturn the draconian limits placed on our communities by malevolent or incredibly incompetent politicians. This is about shaking free of virus-weariness and talk of politics and alternative medical views and other such distractions, to simply do the terribly uncomfortable, extremely inconvenient thing — the right thing: Wear masks everywhere we congregate outside our homes, and perhaps even as we walk outside, like we see so many of our fellow citizens doing.

Imagine if our fellow Americans, seeing an Orthodox Jew walking toward them in the distance, could be certain that he is wearing a mask, because, after all, he’s one of those religious Jews and they’re all good, law-abiding citizens. We would turn from an am naval v’lo chacham into an am chacham v’navon, hagoy hagadol hazeh. But even more important than what they would say about us is what we would be able say to ourselves: That we are acting as Torah Jews must, as the Eibeshter expects of us.

And I’ll confess, that I myself am nowhere near as careful about mask-wearing as I ought to be. And I wonder: What’s wrong with me?

Imagine if we weren’t losing a single one of ours anymore, may it be so immediately. We would still be living in a nation undergoing unspeakable tragedy. Close to a quarter of a million dead, and counting. That’s more than the combined deaths suffered in America’s last five wars. More than 70 9/11s.

The halachah (see Orach Chayim 574:4) requires (or at least lauds) the curtailing of pleasurable activities during a time when the world is being convulsed by death and travail. And Chazal (Yevamos 63a) also teach that large-scale tragedy only comes to the world in order for us Jews to take heed and repent. That’s true even if it’s only occurring across the globe — how much more so when the Angel of Death dances in our very midst. Yet, circulating in frum communities, one rarely hears talk and senses little awareness of the proportions of this immense unfolding societal tragedy. What are we thinking?

Originally featured in Mishpacha, Issue 834. Eytan Kobre may be contacted directly at kobre@mishpacha.com

The greatest success is the ability to own up to failure

Eytan Kobre
The Secret Is Out

Eytan Kobre
And Justice for All

As the grandchild of German survivors, Rabbi Dovid Asher’s intense interest in the case is very personal