So what’s the difference between ambition and greed? 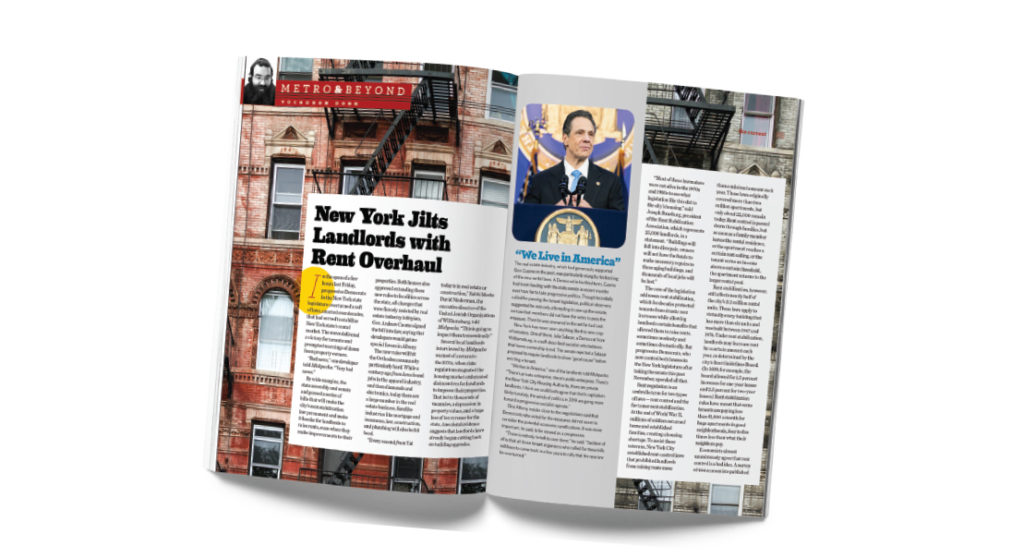 Nobody likes the greedy, yet greed is everywhere. It gets people up in the morning and makes friends of enemies. Greed greases the wheels of power and tickles the wealthy to become uber rich. Behind every two competing political views, greed stands as the dividing line.

The recent rent control laws are a case in point. A recap: The New York state legislature passed a slew of bills recently in the name of protecting tenants. This legislation severely limits landlords’ say over their own property and grants tenants facing eviction up to a year to find a similar apartment in the same area after a reasonable search.

Since I wrote the article about the new rent laws in these pages about a month ago, I’ve been stopped by quite a few people and been accused on the letters pages and in outside opinion pieces of taking one side in a legitimate debate. So let’s be clear: This law is about more than just paying the rent.

A wave of socialism has engulfed this nation over the past few years. It is hard to know whether this is skin-deep or deep-rooted. Candidates for president are falling over each other to propose the more radical plan, the more expensive proposal, the executive order they will issue to grab more taxpayer dollars.

Bernie Sanders will abolish private health care and give it away free at a cost of $32 trillion over a decade. Don’t bother with the math, it’ll break the calculator. Not to be outdone, Elizabeth Warren is promising free college and student debt forgiveness at a cost of $1.25 trillion. A number of the 24 declared candidates running for the Democratic nomination have embraced Rep. Alexandra Ocasio-Cortez’s “Green New Deal,” a $96 trillion plan that regulates everything from houses to cows, jobs and health care.

It is in this context that the rent laws were passed. One legislative insider who speaks regularly to lawmakers told me the series of near-socialist laws that have passed in recent months have little to do with ideology and much to do with posturing. The current atmosphere in Albany is just “a battle to see who can be the bigger progressive,” he said.

One consistent argument for the rent laws is that no one’s home should be at the mercy of a landlord’s “greed.” We hear the same message across the progressive list of demands. Health care shouldn’t be at the mercy of the “greed” of a pharmaceutical company, jobs shouldn’t be left to “greedy” Big Business or energy to the greediness of Big Oil. But should trying to make money truly be considered greedy?

On the other hand, let’s take a look at what socialism really is.

Socialism is when Sen. Bernie Sanders rallies with McDonald’s employees striking for a $15 minimum wage but at the same time pays his own campaign workers much less.

Socialism is when Mayor Bill de Blasio orders meatless Mondays in public school or declares the end to New York City skyscrapers in the name of global warming, yet strangely insists on taking his SUV each morning from Gracie Mansion on the Upper East Side of Manhattan to his favorite gym in Brooklyn.

Socialism is declaring that all those previous failed attempts “didn’t implement it properly.” Exhibit A, the Soviet Union. Exhibit B, Venezuela. And C, Cuba. And D, North Korea. And E, Zimbabwe. And on and on.

The rent laws may not be socialist in that they do not nationalize homes (a long-held dream of Mayor Bill de Blasio, as he confessed to an interviewer years ago). But they make property ownership so bureaucratic that it’s a short jump to full state ownership.

For example, previously, when an apartment’s rent reached $2,770 a month, the landlord could “deregulate” it and begin to earn market returns on it; the new laws eliminate that provision. Additionally, the new laws cap the costs of renovation that a landlord can pass along to tenants. With no financial incentives for landlords to renovate, the long-term effect on the quality of New York housing stock will be devastating.

“I think you’re going to see landlords doing the bare minimum to rent an apartment,” landlord lawyer Sherwin Belkin told Commercial Observer, a real estate industry newsletter. “Scrape the floors, spackle the holes in the walls and paint the walls and you’re good to go. They’ll keep the old boiler as long as possible and patch the roof before they replace it. There’s no return on investment.”

Already, hundreds of people have lost their jobs connected to the real estate industry. Buyers are trying to get out of contracts, citing the new laws. These are not greedy people; they are just trying to earn a living by using their natural and human ambition.

So what’s the difference between ambition and greed? Ambition is when you set out to make money and you earn it. Greed is when you covet someone else’s success.

So tell me, who’re the greedy ones here?