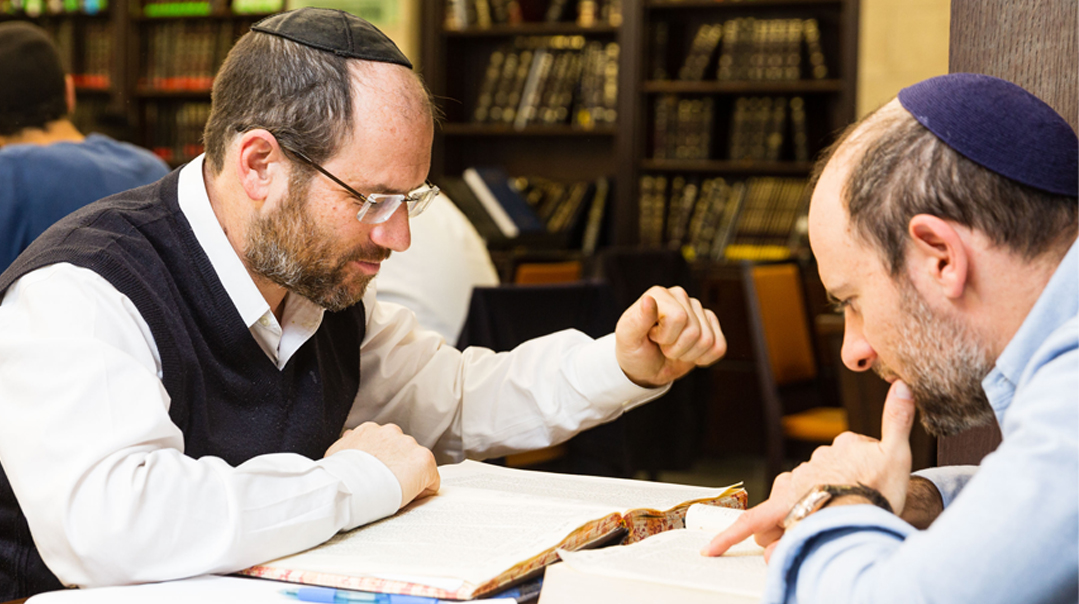 The limud: Daf Yomi and Halachah

eeping to a daily learning commitment is challenging for anyone, but singer Aharon Razel has made it part of his artistic DNA. His 2012 hit song “Kavati” spoke, tongue firmly in cheek, of rejecting offers to set up a kiruv center in Alaska, or to give out seforim and dance at highway junctions, because “I’ve fixed my place here in the beit hamedrash.”

But the serious inspiration behind the catchy song lies in an appreciation for the power of chavrusa study that he’s gained over the 14 years spent learning with Moshe Chessed, his Texan-born neighbor in Jerusalem’s Nachlaot neighborhood.

“Moshe has a special role in my life,” says Aharon Razel. “Sometimes we look at each other and say, ‘If it weren’t for this chavrusa, we wouldn’t manage to learn.’ Chavrusas stimulate each other through arguing, the back-and-forth helps the Torah become vivid. The fact that someone is counting on you — if you don’t come, then he also won’t learn — that’s the secret of your motivation.”

The Razel-Chessed partnership began almost spontaneously after Aharon took up daf yomi two cycles ago. “My brother Yehudah gave a shiur in Nachlaot,” says Razel, “and at the end of the shiur I stood up and announced ‘Who wants to do chazarah on the daf?’ I’d learned about the importance of going over your learning from my rosh yeshivah, Rav Rafael Weingot in Tzfat. Moshe immediately stepped forward, and since then we’ve hardly missed a day.”

With both men in their forties, juggling busy careers and families, that hasn’t been easy. When Aharon was working on a song while staying with Mordechai Ben David in the US, he got up in the middle of the night to learn with his chavrusa back in Nachlaot. When Moshe, who divides his time between business and learning, needed to travel to the north of Israel, Aharon drove up with him and learned on the way — and then took the next bus back down. “He even came to learn in the hospital with me after my wife gave birth,” laughs Razel. “That’s the meaning of kevius.”

Over the years they’ve changed location — their daily session now takes place down the road from Nachlaot in Shaarei Chesed — and subject material. After one daf yomi cycle, the pair turned to halachah, completing issur v’heter and hilchos Shabbos. But the highlight of their joint learning remains finishing Shas. “I’ll never forget that. We made a beautiful seudah for our families — it’s a very special feeling.”

As anyone who’s spent time in a beis medrash can attest, sitting over an open Gemara has the ability to turn many people into composers. As a popular singer and composer, how does Aharon Razel’s music benefit from his learning?

“I sing over my Gemara,” he admits. “I compose songs when I learn. Sometimes I see a pasuk or other text and I’ll say ‘Moshe — make a note here! I want to make a song out of this.’ ”

But Torah is not just a source of lyrics; it’s become a source of inspiration. “When I first went to learn in Tzfat, I thought I was running away from my music career. But then I found that connection to the Torah inspired me to make music. Back then I produced my first album, called Burning Bush. No matter which musical commitments I have scheduled for later in the day, we learn until at least one o’clock. The kedushah of the learning inspires what I do later — even if my Tel Aviv producer can’t understand why we can’t meet at 10 a.m.”

It’s been 14 years since Razel started daf yomi, but things are coming, in a sense, full circle. In honor of the Dirshu siyum, he’s recording a song for the first time with his brother Yonatan, also a famous singer, as well as their father and brother Yehudah, his first maggid shiur.

As for his long-standing chavrusa Moshe Chessed, they have many ambitions in learning.

“I’m a Levi,” says Aharon Razel, “so I dream of singing in the Beis Hamikdash. That means we need to start learning Kodshim.”