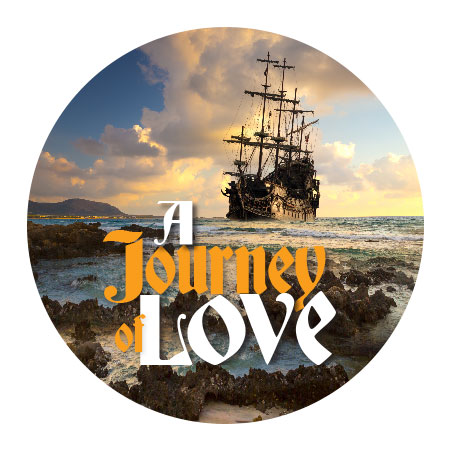 The first part of Rebbe Nachman’s journey began with getting a ride aboard a ship to Odessa, but traveling through Odessa was very risky. Almost any Jew who undertook the dangerous journey to Eretz Yisrael (mainly meshulachim who brought money back from Europe to the destitute Jews living in Eretz Yisrael) traveled only through Galatz, Romania. This was a longer route, but Rebbe Nachman chose it anyway. He had heard about the dangers involved in crossing the treacherous waters of the Danube River into the Black Sea, but this did not deter him. And so, they were off!

“Rebbe, the people of Odessa heard you were coming, and now look!” The Rebbe’s attendant pointed to the growing crowd of Jews with shining faces who had come to gather at the docks in Odessa to wish Rebbe Nachman a farewell. “Not only that, but they are escorting us to our ship with many coaches!”

The air slowly swelled with the sound of many voices joining as one as the Jews sang and danced as they escorted the great Rebbe toward the ship that would be taking him to Turkey.

As they were waiting on the ship, Rebbe Nachman turned to his attendant and said urgently, “Did you remember to bring the large amount of ink and parchment I requested? I will be writing much Torah during this journey.”

“Yes, of course, Rebbe. I have it all right here. Please, let me have the key to the trunk so I can safely store the Rebbe’s writings there.”

The Rebbe stared intently at his attendant. “You must not see the words I am writing. They must be concealed from your eyes.”

The attendant already knew that as famous and renowned as Rebbe Nachman was across Europe as a tzaddik and chassid, the Rebbe was secretive about his avodah and there was much mystery surrounding his actions and words. He could be more accurately described as a hidden tzaddik. There was more than one instance during the Rebbe’s lifetime that extremely holy seforim that he wrote were hidden away from the human eye. So the attendant was not surprised that Rebbe Nachman would be requesting this of him now, as they embarked on this holy, mysterious journey.

“That is not enough this time. You must swear to me that you will not look at any of the writings. Will you do this? If not, I will not give you the keys to the chest.”

The attendant swore to him.

At long last they set sail out into the vast Black Sea. The very first day, a tremendous storm began to brew. Thick, grey clouds covered the vast, open sky and freezing raindrops began to fall across the deck. Soon, lightning and thunder lit up the heavens and struck awe and fear into the toughest of hearts. Waves slammed relentlessly against the side of the ship, sloshing water across the decks.

“Rebbe, the wind…” The attendant whispered in the murky darkness of their cabin.

The wind was howling with terrifying intensity, battering away at their eardrums. The mix of wind, lightning, and thunder was almost too much to bear.

Of course, Rebbe Nachman was not surprised. The opposition to his holy journey had officially begun. He had been expecting this, waiting for this. The Satan would do his very best to prevent the tzaddik from reaching the shores of Eretz Yisrael. Only Hashem’s tremendous kindness could rescue them now from the ocean’s fury.

Throughout the night, the Rebbe learned and davened, attaching himself to the Master of the World. Neither the Rebbe nor his attendant slept at all that treacherous first night. With tremendous thanksgiving to Hashem, after four wearying days at sea, they joyfully ascended to the deck and beheld the sight of Istanbul, Turkey. It was so very good to be on land, at long last.

Little did anyone know that the danger that would present itself on the shores of Turkey would prove to be even more terrifying than the engulfing ocean waves. The source of the danger, two religious Jews, was also extremely unexpected.

“Rebbe, we don’t speak the language here and we have absolutely nowhere to go!”

The Rebbe and his attendant stood on the dock and watched as the Turks passed by, walking back and forth, speaking in their foreign language. They sat down and waited. The entire trip was in Hashem’s hands; they had prepared almost nothing in advance. Now they waited for Divine help.

A man wearing a long robe who had a twirled, fluffy black moustache walked up to them with a large smile.

“Baruch Hashem!” The attendant leaped up with a smile. “You are an interpreter, I assume?”

“Ha! Of course! How I else would I be able to communicate with you? So you need lodgings, yes? Okay, I can find you someplace. There are already two other chassidim staying nearby. They are returning from Palestine to Europe, after delivering money to their rebbe in Palestine and helping his community. I assume you are both doing the same, as do all the Jews who travel between Europe and Palestine. Now, follow me, please.”

They followed the interpreter into the old city of Istanbul, near the Sultan’s place of lodging. Right before they entered their lodgings, Rebbe Nachman issued a strict warning to his attendant. “Before we go inside, I must warn you not to tell these chassidim who I am. I must conceal my identity; I must stay hidden in the shadows so that our journey is successful. I beg of you, do not reveal to them who I am. At all costs, say nothing.”

The two men in the small lodgings rushed to embrace Rebbe Nachman and his attendant.

“Wait a minute!” One of the men held the attendant at arm’s length and looked him over closely. “I know you! You and I were acquaintances back home some time ago. Do you recognize me?”

“Yes, of course I do! I cannot believe we are meeting here, in this forsaken land so far from home.”

“So, nu? Why are you here? And who are you traveling with?”

“With him.” The attendant looked over at Rebbe Nachman. “With that young man…”

“Hmmm…” The chassid looked Rebbe Nachman up and down. “So, who are you? What is your name, young man?”

“No one too important,” the attendant said hurriedly. “He has identification papers from the Austrian Kaiser’s government.”

“Well, that’s an unclear answer if there ever was one. I know you, but I don’t know him. If we’re going to be staying here together, I’ll need to find out a little more information. Surely you know all about the terrible feud between our Rebbe in Eretz Yisrael and the other Rebbe… We have to determine that he isn’t working against our cause.”

Rebbe Nachman and the attendant knew then they were in a lot of trouble.