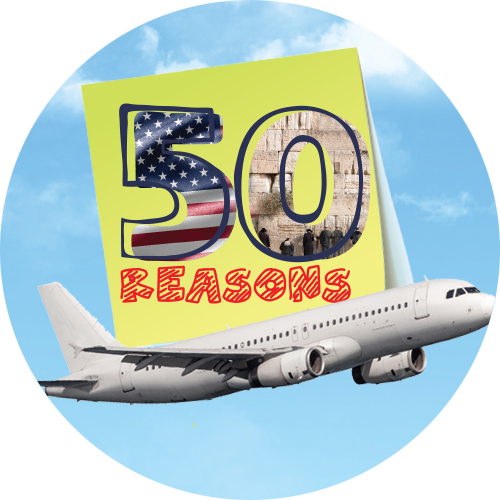 It’s now Winter Break in New York and one of my old friends, Eli, is here visiting Eretz Yisrael with his family! Eli and I were best friends back home. We went to school together since preschool and we were in the same Sunday baseball league.

I was super psyched to hear that he was coming and I somehow even managed to convince my mom that I should be able to take off a day from school to hang out with him! We decided that his parents would drop him off at my house on a Sunday afternoon, let me show him around my new town, have him sleep over, and then when his parents came to pick him up Monday morning, I would also go with them and join them in their plans for the day.

Eli and I are having a great time together! When he asked when I was coming back to New York for a visit, I told him about this deal I have with my mom. I explained that I have to come up with 50 cool things about living in Israel before my cousin’s bar mitzvah in May. If I could finish my list in time, I would get to go with my mom to New York. Eli thought that was a cool idea and decided to help me out with it. So right now, as we’re sitting in a restaurant eating falafel for lunch, Eli is going to be adding to my list of awesome things about Israel.

Introducing the amazing and talented Eli Klein! Here he is, folks! Enjoy!